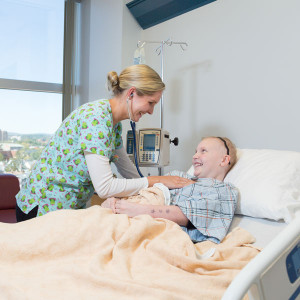 When Genevieve Neiman was 10 years old, her parents had no idea that a routine doctor’s visit would lead to a cancer diagnosis. Or that she would begin her summer vacation the very next day as an inpatient at Connecticut Children’s Medical Center.

The family was packing for a trip to Florida when they received a call from the pediatrician they had seen the day prior, instructing them to go the emergency room at Connecticut Children’s. There, they received some unexpected news: Genevieve had acute lymphoblastic leukemia (ALL), a cancer of the blood and bone marrow that occurs when abnormal cells in a part of the body begin to grow out of control.

“When Genevieve was diagnosed on June 22, 2016, we honestly had no idea that she was that sick,” her mother, Meredith said. “Genevieve had been feeling tired, had a few bruises and had lost some weight in the month leading up to that, but we were shocked to learn she had such a serious illness.”

According to the Leukemia and Lymphoma Society, ALL is the most common cancer in children, adolescents and young adults younger than 20 years of age. Approximately 20 children are diagnosed with ALL at Connecticut Children’s each year.

Meredith and her husband, Douglas, were shocked by the revelation, but Genevieve seemed to take it all in stride. “Guess I’ll be able to wear a bright pink wig soon,” Genevieve told her mother shortly after hearing the news.

“She was always upbeat about her diagnosis and took the news so well,” Meredith recalled. “She’s such an amazing girl.”

“For Genevieve, her illness was another chance to look for the good things that could come out of a difficult situation,” said Michael Isakoff, MD, Clinical Director of Connecticut Children’s Center for Cancer & Blood Disorders. “As her primary physician, it was important to me that she never lost her positivity.”

During her hospital stay, Genevieve participated in a lot of activities like art and music therapy that made her days easier to bear. Social Work and Child Life staff members supported her during difficult treatments and made sure she kept up with her schoolwork.

“Connecticut Children’s Medical Center is very supportive for the whole family,” Meredith said. “They provided us with people to talk to, they made sure we knew what the side effects of her medications were; they made sure that we, as a family, understood what the medical diagnosis was and what to expect every step of the way.”

After a month of inpatient treatment – from June 22 through July 22 – and approximately three months after diagnosis, Genevieve’s cancer went into remission, and for the last two years she’s continued chemotherapy to keep it that way.
“She’s doing really well,” Meredith said. “She should be done with treatment in October 2018.”

Genevieve, who is now 12 and in the 7th grade this fall, enjoys basketball, drama, science, reading and art, and is considering becoming a Child Life Specialist someday, so that she can help reassure other children during stressful times.

“It’s important to surround yourself with nice people and positive energy,” Genevieve advises. “Hanging out with my dog also helps me take my mind off my cancer.”

Meredith said her family felt fortunate to have access to Connecticut Children’s, where Genevieve was not only provided with the advanced medical care she needed to go into remission, but where the staff has treated them with such warmth.

“Connecticut Children’s is a second family to us,” Meredith said. “Everyone makes us feel so welcome. Everyone – from doctors and nurses to members of the custodial staff – wants to know how Genevieve is doing, especially when they haven’t seen us for a while.”

“Our children are our future and they need the best medical care and emotional support to help make them better,” Meredith said. “Connecticut Children’s provides that care and comfort and expertise for children and families facing a cancer diagnosis.”

Genevieve offers some additional advice for children with cancer: “Think positive and look on the bright side of things because you will eventually get through it,” she says. “Stay happy and remain who you are; cancer can’t change who you are.”