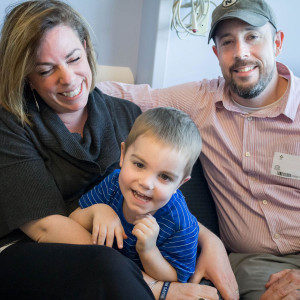 Gavin David is an ebullient child, always happy, always running, says his mother, Lindsay. “He’s a ball of sunshine,” she says. So Lindsay wasn’t particularly alarmed when Gavin woke up with a bloody nose one morning in March 2017. His mother figured it was just winter in New England and let it go. But the next weekend the family went to a foot race, and the then-2-year-old Gavin was very clingy and didn’t want to be put down. The following day he had a slight fever, which the doctor thought might be an ear infection and for which he prescribed antibiotics. It all seemed pretty ordinary. Then Gavin’s face started swelling.

Four days later, after the swelling kept getting worse, the pediatrician ran a battery of tests and called at 7:30 the next morning. “He said, ‘Your son has leukemia, and you need to take him to the emergency room right away,’” Lindsay recalls. “The leukemia was attacking his lymph nodes in his neck and chin and spleen, hence the swelling. His red blood cells and platelets were dangerously low, too, so he required several transfusions.” Gavin was admitted to the Pediatric Intensive Care Unit and spent the next 26 days at Connecticut Children’s Medical Center. When he was diagnosed, his white blood cell count was 480,000 (typical counts are in the range of 4,300 to 10,000) and 95 percent of them were leukemic.

Two days after being diagnosed, surgeons put in a port-a-cath (a device inserted under the skin and into a vein) so that his doctors could more safely deliver chemotherapy and get blood samples. He was declared in complete remission in May 2017, but he will continue chemotherapy until June 20, 2020. “He’s doing great,” says Lindsay. “Now, when he refuses to go to bed, I’m happy: He’s doing typical 3-year-old stuff, and that’s just great.”

“Gavin is like a ray of light when he enters our clinic,” says Natalie Bezler, MD, Gavin’s oncologist at Connecticut Children’s. “He brings smiles to all of our staff and is a glowing reminder of why we do what we do. He is also a perfect example of the inspirational resilience of children.”

Because of the clinical trials and research that Dr. Bezler and her colleagues at Connecticut Children’s are engaged in, new treatments are being developed—treatments that allow kids like Gavin to grow up and live a full life.