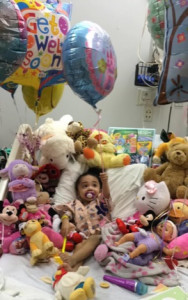 My daughter, Leilani, is a lively little 6-year-old. She loves coloring and making arts and crafts projects. She’s so happy, and she’s a lot of fun.

There isn’t much in life that fazes Leilani, which I find amazing. Early in her life, Leilani was diagnosed with a rare disease called Langerhans cell histiocytosis (LCH), in which the body makes too many white blood cells called histiocytes. Without treatment, these cells can build up in areas of the body and lead to tumor growth and organ damage.

Today, my daughter is disease-free. You’d never be able to tell Leilani ever had LCH because of the amazing care she received from the experts at Connecticut Children’s Center for Cancer & Blood Disorders. From the beginning, we knew we weren’t going through this alone. We had a whole family of caregivers behind us every step of the way.

Mysterious symptoms and a search for answers

Leilani was about 1 1/2 when I started seeing a lot of changes in her. She had a fever every day for six months, and no one could figure out what was causing it. Then she developed scabs on her face and scalp. I took her to a dermatologist, who thought Leilani had psoriasis. We followed the doctor’s treatment plan, but Leilani wasn’t improving.

Then we were referred to Connecticut Children’s. At first, we were working with the doctors in Infectious Diseases & Immunology, but they were unsure of what was causing Leilani’s symptoms. Then we met with the providers in Rheumatology, who ordered blood tests for Leilani. When the results from these tests came in, they asked us to come to the hospital. Two weeks after Leilani turned 2, she was diagnosed with LCH, which only affects one or two out of every 100,000 people. 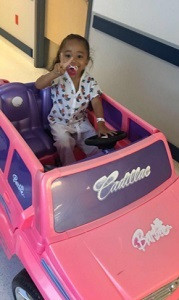 Once we started working with the Center for Cancer & Blood Disorders team, they told us we had to be aggressive in Leilani’s treatment plan. They told us she likely had the disease for six months prior — right around when I first started noticing her symptoms. In that time, the disease had spread throughout her body. It was everywhere from her legs to her skull, including within her ribs and spine.

Leilani had chemotherapy treatment every day at first, as well as doctor’s visits once a week to make sure she was doing well. Because Leilani was on chemotherapy, her immune system was compromised, so she had to be on antibiotics to prevent infection. She was also on steroids as part of her treatment regimen.

The treatment process was tough on us. I was a young, first-time, single mom still trying to figure out how to be a parent, which was challenging enough on its own. But finding out your child has a rare disease and dealing with everything involved in her treatment took that challenge to a whole new level. Luckily, I had help. My mom, Ana Torres, played a big part in Leilani’s treatment plan. I worked full-time while Leilani had her chemotherapy, so my mom and I would take turns bringing Leilani to Connecticut Children’s for her treatments.

Even at the toughest points, however, we never felt like we were going through this process alone. The providers and staff members at Connecticut Children’s were always there for us. Leilani ended up under the care of Kerry Moss, MD, and Dr. Moss’ attention to detail throughout Leilani’s treatment was perfect. Her nurse, Mary Keller, was amazing as well. Everyone there treated us like family. They made sure we were comfortable during Leilani’s treatments and even offered to run to the cafeteria for me if I was hungry.

The outstanding care of the Connecticut Children’s team wasn’t limited to the times we were at the hospital. The staff members understand how hard it is for parents to shift their whole lives around to take care of a child who has a rare disease. They made sure I knew about all the resources available and set up a home care nurse to help me in the beginning. They made sure I was comfortable providing the care Leilani needed at home and then trusted me to ensure she got it. The Connecticut Children’s team was on top of everything. I never felt like I was alone.

LCH remission and a positive outlook 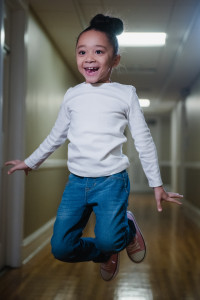 As of February 2017, Leilani’s LCH is in remission. She no longer has to have chemotherapy, and she’s not in active treatment for the disease. We see Dr. Moss every six months to follow up and get blood tests to make sure Leilani is still healthy. Going to Connecticut Children’s was such a big part of Leilani’s life for so long that she misses it now. Whenever we pass by the hospital, she says, “That’s where I used to go to chemo!”

It’s terrifying as a parent when you think about your child having a rare disease, going through chemotherapy and living with the aftereffects. But when you look at Leilani or talk to her, she doesn’t have bad memories of her experience and isn’t traumatized by it. She only has happy thoughts about the care she received. At the time, I thought we were living in a nightmare that would never end. But my daughter is healthy and happy, and she doesn’t have any long-term effects from her illness. That’s the best and only thing I could have ever hoped for, and it was possible because of the incredible care we got from the Connecticut Children’s team.

From the time Leilani was diagnosed, I heard from family members who said I should get a second opinion from another provider in Boston or elsewhere. But I know that my daughter couldn’t have gotten the care she received at Connecticut Children’s from anywhere else. I know that’s a pretty high pedestal to put them on, but they earned their place there in my eyes. It never felt like Leilani was just another patient to them. We became part of a family.

That family atmosphere is a reason I won’t take Leilani anywhere else now when she needs treatment for serious medical conditions. In June 2018, Leilani had an accident and broke her hip, which required surgery to treat. I never thought about anywhere but Connecticut Children’s for her care. Thanks to the expert treatment of Philip W. Mack, MD in the Orthopedics division, Leilani is pretty much back to normal, and we received the same amazing level of care we had come to expect during our first encounter with the Connecticut Children’s team.

If there are any parents out there who aren’t sure about where to take their children for the medical care they need, I would say this: Take your child to Connecticut Children’s. If you have the same experience my daughter and I had, you’ll never go anywhere else.

If your child has Langerhans cell histiocytosis or another rare disease, contact our Center for Cancer and Blood Disorders team to learn how we can help.