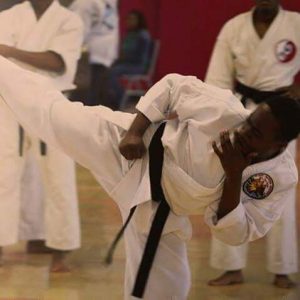 My name is Robert K. Ffrench and I am a graduating patient of Connecticut Children’s Medical Center. I was originally sent to this medical facility when I had a stroke at the age of 8 years old due to my sickle cell disease, after another hospital (which won’t be named) explained to my mother that there was nothing they could do for me and to try somewhere else. Things looked grim, but when I woke from my stroke I found out my first nurse was actually my school teacher’s sister.

It was after that incident that me and all of my friends with sickle cell started to transition to Connecticut Children’s Medical Center because of their advanced medical care and to be honest, because they actually cared enough to try; instead of giving up like other hospitals before them.

Thanks to the love and support I got from Dr. Nathan Hagstrom, former head of the hematology clinic, Nancy Caperino, social worker, and the entire Center for Cancer and Blood Disorders, I’ve grown from the skinny kid who was bullied in school for his disability.

Thanks to Connecticut Children’s giving me a chance I am now a proud, confident, married man. I not only accomplished my dream about being the first black belt in my school with sickle cell, but I was also inducted in the world karate union hall of fame in the year 2015.

Now, I teach kids at the Artist Collective where I grew up taking classes thanks to the scholarship we received from Connecticut Children’s Medical Center to try and stay active instead of in the hospital 24/7.

There was a time I could not go 2 weeks without being admitted in the hospital, now I go months at a time and I’m following my dreams. One day I wish to open my own school but as time goes now my goal is to teach any and all children no matter what sickness, background or color.

You can be anything you put your mind to. I’m living proof and none of it would have been possible without the hospital that gave me a fighting chance…Connecticut Children’s Medical Center.