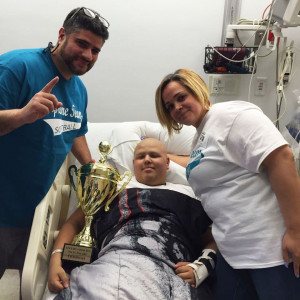 Armani Hernandez’s father, David, was apprehensive in the fall of 2015 when 14-year-old Armani said he wanted to play football at school. “He was a baseball player,” David says, “and I was skeptical about football because it has such a high injury rate.” And sure enough, soon after starting football, Armani complained that his arm was hurting after each practice. Then, in the final game of that season, his father’s fears came to pass. “He fell on the field, and he didn’t get up,” David says. “He said something snapped in his arm.”

Armani went to the Emergency Room at Connecticut Children’s Medical Center, where a doctor had the arm x-rayed. He found there was indeed a break and what looked like an older break, as well. The doctor put his arm in an air cast and said to bring him back in three weeks. But on that return visit, the doctor said the break had not healed at all. So he sent Armani to an orthopedist, who saw a glow on the film that he didn’t like. He said it could either be an infection or “a growth,” a term with ominous implications that David did not immediately understand. The orthopedist said either possibility required surgery for a diagnosis, and he wanted to do it right away. In fact, he scheduled surgery for the next morning, December 24, at 6 a.m.

It was not going to be a happy Christmas Eve.

“My wife and I were in the waiting room with Armani’s godmother while the surgery was going on,” David says, “and I had to leave for a time, and when I got back, my wife and his godmother were gone and I heard crying from a room with a closed door. I went in, and that was when the doctor said the word ‘cancer’ for the first time. My birthday is Christmas Day, and that year was not the best holiday we’ve had.”

Michael Isakoff, MD, the Clinical Director of the Center for Cancer & Blood Disorders and Director of the Sarcoma Program and the Reid R. Sacco Adolescent and Young Adult Cancer Program, took on Armani’s case. After a PET scan, CAT scan, x-rays and MRI, Dr. Isakoff had the definitive diagnosis: Armani had osteosarcoma. Osteosarcoma is the most common malignant bone tumorand it most frequently shows up in adolescence, being more common in boys. Fortunately, if the tumor is found early and has not metastasized, as was the case with Armani, the prognosis is very hopeful.

Dr. Isakoff laid out the plan for his treatment: a 32-week course of chemotherapy that would involve an alternating pattern of one week in the hospital and the next week at home at home recovering. There were tests all through the course of chemotherapy, and at the halfway point, Dr. Isakoff and the family decided on surgery to remove the remaining tumor. The chemotherapy had killed 99.8 percent of the tumor, and the surgery took out what remained. Armani completed his chemotherapy in January 2016.

“We had to make a lot of life changes,” David says. “We had to sell the house in Hartford and now live in Manchester, but everybody at the hospital was great, even the security guards. And Armani is doing really well. He lost a lot of weight during his treatment; he was down to 176 pounds but he is now 276 and playing football again. He’s a very healthy kid.”