At 2 and a half years old, Lincoln is a chatterbox, a flirt and in the words of mom Jennifer, “a ham and a half.”

He is also the survivor of five congenital heart defects. 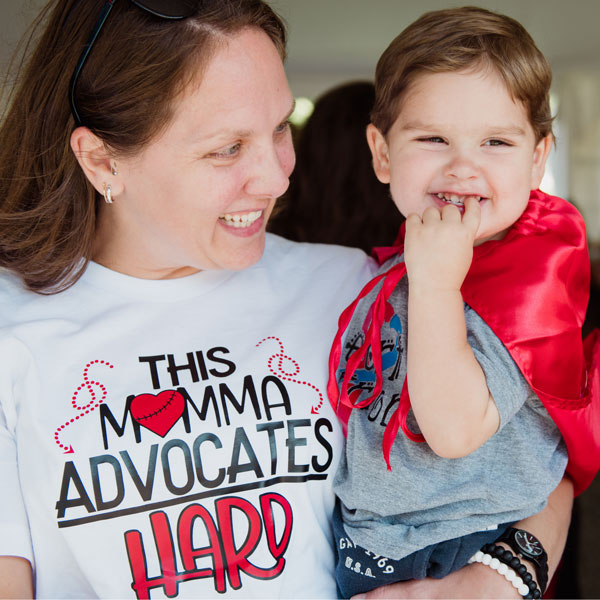 Lincoln’s heart defects were discovered the day after he was born, in a routine oxygen screening for newborns. His parents, Jennifer and Clarence, who is active duty military, were making plans to head home from the maternity ward. Lincoln’s sister, Lydia, then age 5, was excited to get to know her baby brother. It was Memorial Day weekend, and family was visiting from out of town. But after the oxygen test, everything changed. Lincoln was transferred to Connecticut Children’s under the care of the Cardiology Division. Instead of preparing to bring their newborn son home, Jennifer and Clarence prepared for major surgery.

On the eighth day of Lincoln’s life, in an open-heart surgery that lasted eight hours, Connecticut Children’s physicians repaired five defects in his heart: double outlet right ventricle (in which the heart’s two major arteries both connect to the right ventricle); transposition of the great arteries (in which the two major arteries are reversed); coarctation of the aorta (in which a part of the aorta is narrower than usual); and two defects commonly known as a “hole in the heart,” atrial septal defect and ventricular septal defect.

The surgery was successful. For the next three weeks while Lincoln recovered at Connecticut Children’s, Jennifer and Clarence slept there too.

“The Cardiology team ended up like family,” says Jennifer. “We nicknamed one of the cardiac nurses, Lisa, our ‘fairy godmother.’ They would all check on us all the time. They weren’t just taking care of Lincoln, they were taking care of us.”

Soon after they brought Lincoln home, a frightening incident revealed another birth defect, laryngomalacia. The family returned to Connecticut Children’s for a second surgery, this one to repair Lincoln’s airway and place a tube in his stomach to help him feed. The Connecticut Children’s team expanded to include the divisions of Pulmonology, ENT, Gastroenterology and Speech Language Pathology.

“You’d have no idea he’s been through so much”

In the two years since, Lincoln’s specialists at Connecticut Children’s have watched him grow from newborn to infant to toddler. He still sees his feeding team on a weekly basis. These days, his heart is doing great and he checks in with his cardiology team just every six months. He’s earned the nickname “Cheeks” from the team’s director of Interventional Pediatric Cardiology, Frederic Bernstein, DO. The nurses call him “Dr. Lincoln,” because at every follow-up appointment when they listen to his heart, he reaches for their stethoscope to listen to theirs. For Christmas, he received a toy doctor’s kit. He’s had enough experience to know just what to do with it.

“He’s 2 and a half and he knows how to do vitals,” says Jennifer.

But for all he’s been through on his health journey, he is also much like any other child his age: energetic, curious, precocious.

“He wants to do everything all the other big kids do,” says Jennifer. He can’t wait to go to school like his older sister. He wants to ride the bus and raise his hand in class. If he had his way, he’d talk all day – and night. “And he’s such a little lovey,” she adds. “He knows that if he flashes his signature Lincoln smile, he can get away with anything.”

“Looking at Lincoln you’d have no idea he’s been through so much,” says Jennifer. “He is the happiest kid going. I will be forever grateful to Connecticut Children’s.”