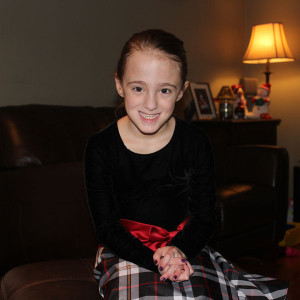 It’s been more than six years since Marina Tribuzio and her brother, Pete, were born, weighing just over 1 pound apiece.

Both babies, who were born three months early on August 11, 2012, faced a host of challenges that premature newborns often face, but Marina was also diagnosed with a rare congenital heart defect known as an aortopulmonary window (APW) that required corrective surgery. Blood was shunting into her lungs through the APW, a hole located between her pulmonary artery and the aorta.

For Lori and Peter Tribuzio of Bristol, Connecticut Children’s Medical Center was the right place for their babies to receive the specialized care they needed, close to home.

“We are so lucky,” said Lori, who works as a family therapist. “If we had to take Marina to Boston or Philadelphia for heart surgery, we wondered how we would even be able to do it—how we would be able to split our time between the neonatal intensive care unit here and an out-of-state hospital.”

They didn’t have to.

Following surgery for a perforated intestine, Marina underwent surgery for her aortopulmonary window at Connecticut Children’s in late August.

“They let us hold her right before surgery,” Lori said. “It was the first time we had touched her, because they were worried about infection. She was still intubated,” she added.

“When Marina went in for heart surgery, I was a mess,” Peter said. “It was only a couple of hours, but she was such a tiny baby.”

“Aortopulmonary windows are very rare in the general population,” said Dennis Mello, MD, Clinical Director of Cardiovascular Surgery at Connecticut Children’s. “As a major congenital cardiac program in Connecticut, we are fortunate to be able to take care of patients with common and uncommon heart conditions.”

When working properly, the pulmonary artery transports blue blood from the heart to the lungs, where it picks up oxygen, and the aorta takes the red or oxygenated blood from the heart to the body. In Marina’s case, the blood was supposed to be going to the body but a good portion was recirculating in the lungs. Very quickly, this becomes a life-threatening situation for children.

“It’s not a very complicated surgery,” Dr. Mello said. “In fact, it’s a very successful surgery if you have it done in a timely fashion. Ideally, you want to have it done within the first two months after birth. Outcomes are great if you do the repair early.”

Marina’s brother, Pete, was an identical twin, and a third baby who did not survive, were all part of the Tribuzio triplets born at 26 weeks of age. Marina was able to come home from the hospital on November 26, 2012, and Pete joined her on December 19.

For the Tribuzio family – which has since grown to include son, Jacob, age 4 – much of those early days of parenting premature babies seems like a blur, now that life has become more routine.

“At the time, we both worked and stayed as busy as we could,” said Peter, who works as an academic advisor at UConn. “We didn’t get the whole parental experience of having both babies at home until December,” he said.

“Jacob, on the other hand, was an entirely different scenario,” Lori noted. “He was scheduled to arrive via Caesarian on March 3, 2014, and he came on March 2, weighing almost 8 pounds.”

Today, at age 6, Marina is as healthy and active as the next first grader and is still “growing strong.” She likes to run and play and keep up with her brothers.

“They do keep up with each other in loudness and eating,” Peter joked.

While Marina will likely never require another surgery for her heart, Dr. Mello said the Cardiology Division at Connecticut Children’s likes to follow up with congenital heart patients on a regular basis. “If a child has had heart surgery, we keep them enrolled in our Congenital Heart Clinic,” he said. “Connecticut Children’s specializes in the whole spectrum of congenital heart disease, from babies to adults,” he said.

In recognition of its expertise in serving adults with congenital heart disease (CHD), Connecticut Children’s in December received accreditation from the Adult Congenital Heart Association (ACHA), a nationwide organization focused on connecting patients, family members and healthcare providers to a network of experts with knowledge of CHD.  Connecticut Children’s is the first and only CHD program in Connecticut and the 23rd nationally to earn accreditation from the ACHA.

Which means children like Marina can find the cardiac services they need at Connecticut Children’s no matter how old they are.

“We had a great experience at Connecticut Children’s and we would recommend it to others, 100 percent,” Peter said. “It’s a world-class center.”