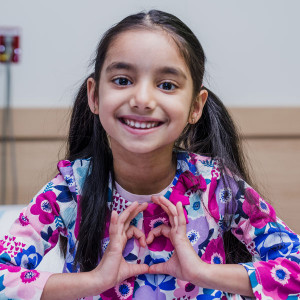 For Siaana’s family, every day is a day of thanksgiving.

Siaana, a sweet little girl who just turned 5, was diagnosed with a rare heart defect in November 2014, just days before the Thanksgiving holiday. Her parents, Annie and Ajay of Wethersfield, were shocked to learn that their 10-month-old daughter had a congenital heart condition called tetralogy of Fallot, which required open-heart surgery only days later.

But they were grateful that the heart specialists at Connecticut Children’s Medical Center immediately recognized the problem and were even more appreciative that the world-class, life-saving care their daughter needed was available close to home.

“Connecticut Children’s has given us so much to be thankful for,” Ajay said.

It wasn’t a typical baby’s cry.

When Siaana was just a few months old, her parents were perplexed by the way their daughter cried. “My wife would say, ‘Some of these crying fits are not the norm,’” Ajay recalled.

“There was no pattern,” Annie explained. “There was more energy behind these cries. Her skin would get darker, and then she would go ‘lifeless.’”

Sianna’s unusual “crying fits,” the couple later learned, were likely the “tet” spells experienced by babies with tetralogy of Fallot.

Tetralogy of fallot is a constellation of four interrelated cardiac defects and affects approximately 1 out of every 2,500 babies born in the United States. It is the most common type of cyanotic congenital heart defect in which the oxygen saturation of the blood is lower than normal and can result in a bluish appearance of the skin. Severe cyanosis may be a sign of life-threatening complications.

At Siaana’s 9-month checkup, her pediatrician had expressed concerns about her high hemoglobin levels and sent the family to Connecticut Children’s for follow-up.

“It was the Monday of Thanksgiving week of 2014,” Ajay said. “It was 4 in the afternoon, and we thought we would be in and out the Medical Center quickly. We went to Hematology for a blood test, but there was more concern about her oxygen levels, and they kept retesting it. They didn’t think her issue was blood related, so they pulled in the cardiologist, who wanted to do an echocardiogram.”

Following a battery of tests, Annie and Ajay were told that Siaana should not leave the hospital. Instead, it was recommended that she be admitted immediately to Pediatric Intensive Care with plans for open-heart surgery the Monday after Thanksgiving.

“It was a lot to take in,” Ajay said. “We went home and grabbed our clothes and lived at the hospital for a few weeks in the family room outside the PICU.”

According to Siaana’s cardiologist, Brooke Davey, MD, “There is a range of types of tetralogy of Fallot and a spectrum of presentations. With significant pulmonary stenosis – or narrowing of the pulmonary valve – patients, like Siaana, often present with cyanosis and poor growth,” she explained.

“Prior to operative repair, patients can be at risk of ‘tet spells’ in which there is a sudden drop in oxygen saturation during crying or feeding when inadequate blood flow is delivered to the lungs,” Dr. Davey said. “These spells can be life-threatening, which is why surgical repair is performed in infancy.”

Most babies with tetralogy of Fallot are diagnosed at birth or in utero, with surgical repair typically taking place between 2 and 4 months of age.

“At the time of her surgery, Siaana’s ventricular septal defect was closed with a patch,” Dr. Davey explained. “In addition, the very small pulmonary valve and the thickened muscle below the valve were removed, and a transannular patch was placed. This portion of the operation allows for the right ventricle to pump blood to the lungs without obstruction, which is critically important for the long-term function of the pumping chamber.”

Dr. Davey noted that a downside to removing the pulmonary valve is that it results in pulmonary insufficiency, which occurs when blood leaks back into the pumping chamber when it relaxes.

“We know from decades of experience monitoring children with transannular patch repair of tetralogy of Fallot, that the pulmonary insufficiency is typically very well tolerated throughout childhood,” Dr. Davey said. “But as Siaana approaches adolescence and early adulthood, her right ventricle may become enlarged due to this leakage, and she may require pulmonary valve replacement, which may be performed surgically or via a less invasive transcatheter approach in the future.”

Until it is time for the next surgery, Siaana has a lot of childhood activities to attend to and fun to be had. “She’s turning out to be a very artsy child,” Ajay said. “She likes to color and draw, and she enjoys being read to. She will be starting kindergarten next fall in Wethersfield.”

Despite the challenges Siaana has faced in the past, including issues with upper-body strength postoperatively and dietary hypersensitivities that have now begun to fade, she can do whatever she sets her mind to, without restriction.

And, for Annie and Ajay, whose youngest daughter, Jayleen, 2, is an Endocrinology patient at Connecticut Children’s, that is a reason to be thankful.

Thinking back to Thanksgiving Day at Connecticut Children’s in 2014, Ajay said he will never forget eating Thanksgiving dinner with all the trimmings with good friends who brought the meal to the hospital, as he and Annie awaited Siaana’s surgery.

”We’re so grateful for Connecticut Children’s and the care our girls have received,” he said.