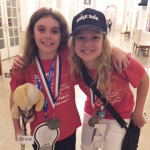 Connecticut Children’s Advancing Kids Innovation Program is proud to share the achievements of two young inventors, Molly Deptula and Corinne Sutula, who have developed unique innovations to help others based on their own unique experiences. Meet Molly and Corinne and learn more about their innovations below!

Tell us about yourself:

My name is Corinne. I love playing sports, being active, and math. I enjoy spending time with my family and friends, especially my grandfather. I truly enjoy family vacations as we get to forget about things going on and just have fun.

How did you come up with the idea for the innovation?

My sister has immune deficiency and receives medicine through her port every three weeks, which takes 7-8 hours, and receives infusions every three weeks through her port and is attached to an IV pole. It is hard for her to be attached to the IV pole and to move around, and she constantly needs help to get toys or move around the house on her own.

Who will benefit from this innovation?

I wanted to make this easier not only for my sister but for anyone who has an IV. This vest makes it easier for families also as parents no longer have to catch up to their child with the IV pole and worry about pulling out the IV accidently if the child moves too quickly. This allows the patient to have their hands free and for parents to be able to relax a little more.

What problem does the innovation address?

The problem the innovation seeks to address is to help those, like my sister, move around easily and independently during an infusion. The Portable IV Vest allows the pole to be left behind and gives the person more freedom and have their hands free, play games, and even take a walk outside while receiving a treatment.

How does your innovation address the problem?

I used an old Girl Scout Vest, but you could use many different materials to make the vest though. I figured out the best spots for the pockets and where the pockets would be most comfortable and then sewed two pockets onto the vest. The first pocket is on the front of the vest and supports the IV bag or bottle. There is an attached clip that makes it very easy to connect or disconnect IV bottle or bag. On the back side of the vest is another pocket which holds the IV pump. Both pockets have interface to make the pockets stronger. There are also snaps and buttons in the pockets for easy access.

What are the next steps for the innovation?

I am working on having my invention patented so that other children and adults can enjoy moving around during long infusions. I hope to find someone, or an organization, that will help make my invention available to those who need it. I have other thoughts of how this invention could help others with different medical issues and I hope to be able to make this invention all that it truly can be and bring it to reality for many people like my sister.

What skills do you think social innovators need to promote the health and well-being of children and families?

The skills social innovators need to promote optimal health, strengthen families, and support communities is the ability to problem solve. There are things all around us that could be made a little better and anyone can come up with an idea that can make life easier for others. You need to solve the problem and be patient, because it takes time for the solution, and most importantly never give up.

What advice do you have for social innovators promoting the health and well-being of children and families?

The advice I have for social innovators is to think of something that could make the world better, or make things easier for people, try to come up with solutions, work to solve it and never, ever give up on it. Keep going and trying because you never know when your idea can turn into reality. It takes lots of time, patience, and many trials but in the end it is all worth it. Anyone can be an innovator and make a difference in the world— all you need is an idea and the determination to see it through.

Tell us about yourself:

My name is Molly Deptula. I am 13 years old and in 8th grade. My favorite school subjects are science and math, but I also like English, French, and Tech Ed. I love animals and raise miniature goats and chickens! I have a dog named Stuart that I love to play with and teach tricks to. I have been doing the Connecticut Invention Convention for 4 years and plan to make it 5 in 8th Grade.

How did you come up with the idea for this innovation?

I was bullied in 6th and 7th Grade. The school could never do anything about it because I was always caught in a “he said, she said” case. Bystanders would forget or take sides, so it was never as simple as “Prove this happened,” because there was no proof. The bully finally made a mistake and tried to harass me in front of a security camera. Finally, there was solid proof that I wasn’t lying, and the school could finally press consequences. But security cameras aren’t everywhere. They could also malfunction. It seemed that every time I was bullied in front of one, it wasn’t clear and the bully couldn’t be identified. There is also no audio on many security cameras. I thought that you would need a security camera all the time in order to avoid a “he said, she said” case. The Bully Band is basically a security camera that can record audio and video, is clear, and can be in any room of the school.

Who will benefit from this innovation?

Any child at risk of getting caught in a bullying situation could benefit from The Bully Band. Students will focus more on academics and less time on avoiding their tormentors. For many kids, school could feel like a more inviting place to be and less of a survival challenge. Schools can also benefit from The Bully Band. With more concrete proof of what really happens between students, schools won’t have to invest as much time and money into investigations of “he said, she said” cases. Also, once kids realize that bullying isn’t something they can passively get away with, chances are, they’ll stop, and the school will be an overall friendlier environment.

What problem does the innovation address?

The Bully Band addresses the problem of a bully and a victim of bullying having different stories, and can help solve the overarching problem of bullying. Often, when a school is investigating a situation of bullying, they rely on third-party students to figure out what really happened. But, if a case takes a long time to investigate, kids will forget. Also, friends of the bully might make up evidence to defend the bully and further put the victim down. The situation, at the time, could have seemed unimportant to anyone other than the victim, so people might not have even been paying attention. Humans cannot be depended on to solve problems; not when it involves emotion, loyalty, and just plain forgetfulness.

How does your innovation address the problem?

If a computer is used, in place of third-party students, the school administrators do not have to worry about students being emotional or having loyalty to friend groups.

The Bully Band will never ask itself:

What if my friends find out that I told on them?

What if I don’t give the right account and let the victim down?

What if I get the wrong person in trouble?

Will I still be popular if I say what I saw?

Who has used your innovation? What do they think of it?

The Bully Band prototype is not fully functional yet. I look forward to the day when it can be tested. I have gotten a positive response from people interested in using The Bully Band. Many think that it has a lot of potential and can be a great asset to school systems and the students of tomorrow.

What are your next steps for the innovation?

My next steps for The Bully Band are to complete the software in more advanced forms of code so the system is fully functional. From there, I would like to raise money to apply for a Utility Patent, and find investors or buyers to put The Bully Band on the market. I would also like to continue modifying the design of The Bully Band so that I have the best product possible on the market.

What skills do you think social innovators need to promote the health and well-being of children and families?

What advice do you have for social innovators promoting the health and well-being of children and families?

I think social innovators should immerse themselves in the problem they are trying to solve.  I would also advise innovators to look outside the box when solving a problem. In many cases where there is a problem, it probably hasn’t been resolved already because the obvious solution is impossible. By looking outside the box, you can see how to avoid the obvious and outsmart the elements.