When our daughter Emma was born, I was fortunate to work as a nurse in the Division of Otolaryngology (ENT) here at Connecticut Children’s. Almost immediately we noticed that her nasal passages looked a bit narrow, so I mentioned it to the pediatrician and he took a quick look and said that she was fine. I mentioned it a couple more times and was dismissed, so I called ENT where I worked and scheduled her an appointment. It was there where it all began.

We saw Katherine Kavanagh, MD and she knew me as a nurse in the department, but treated me just like every other mom. She listened to my concerns and began to notice a few other subtle things that looked a bit different with Emma. Shortly before Emma turned five months old Dr. Kavanagh had shared that she thought Emma needed to follow with Craniofacial and Genetics because she thought she may have Crouzon Syndrome.

This syndrome can cause craniosynostosis, also known as a premature fusion of the skull, midface hypoplasia, which is a smaller midface and in some cases can cause breathing issues and eye problems, vision loss, hearing loss, and overall there is a distinct facial difference. It’s rare, affecting only 1 per 60,600 births. Some of the next two years was a bit of a blur, but within the week we saw both Genetics and Craniofacial and the diagnosis was confirmed a few weeks later with the final Genetics results.

Now that Emma had a diagnosis, we had a better idea of what to watch for, and where to go from there. Next we saw an Ophthalmologist to have her eyes checked, an Audiologist to have her hearing checked, multiple ultrasounds of her head, and a CT Scan to check for that premature fusion of her skull bones. The results indicated that Emma was fused at multiple sites. We knew this would mean surgery, so next we meant with Paul Kanev, MD and Charles Castiglione, MD of the Craniofacial Team to determine what the plan of care would be. At this point Emma was about seven months old, and surgery was scheduled for a Total Calvarium Remodel, for when Emma would be just about nine months old. What that meant is that the doctors would expand Emma’s skull in both the front and back of her head, placing dissolvable pins and plates to allow more room for her brain to grow. In the meantime, Dr. Kavanagh had ordered a sleep study and Emma’s results indicated that she had minor Central Sleep Apnea, so she would briefly stop breathing and then wake herself and breathe just fine. This then earned us a ticket to see the Neurology Department, where we met Jennifer Madan-Cohen, MD.

With all of this going on we had realized that we never had Emma baptized and wanted to have this done prior to surgery, so at eight months of age we planned the baptism. The morning of baptism we were all getting ready, and I looked over at Emma and it appeared to me that she was having a seizure. A week later Emma was in her Dad’s arms and the same episode occurred. We notified her team of doctors and also had a routine follow up with Ophthalmology who told us that at this point Emma had hemorrhaged her retina in one eye, and had swollen optic nerves on both sides, which they thought was due to increased pressure in her head. It was the evening at this point so I called Craniofacial and they contacted Neurosurgery and wanted us to bring Emma in first thing in the morning for another head ultrasound with the possibility that she may need a shunt in her head to drain some fluid. My husband and I put Emma and her big sister Abby to bed and sat on the couch and cried together. The next morning, we arrived at Connecticut Children’s and it turned out that Emma did not have too much fluid, but that her poor brain was being smooshed by her skull. It was causing everything that was going on from the swollen optic nerves, hemorrhaged retina, irritability and maybe even the seizures. No shunt was needed at this time. It made sense why Emma cried so much, especially at bedtime because the pressure in her head was worse when you would lie her flat to sleep. With these results the Craniofacial Team decided to move up Emma’s surgery to the next week.

I remember arriving to pre-op and Emma was so happy and playing, but all I could think about was that she had no idea what was coming, which I guess was a good thing. I can remember passing her off to the Anesthesia crew and she was smiling and waving goodbye as they carried her into the operating room. It was the longest seven and half hours of our lives. The Operating Room was great with frequent updates during the surgery, and the Craniofacial Team had prepared us that Emma’s appearance would change after surgery since they were expanding her head both front and back. As planned she did receive a blood transfusion and they were able to give Emma almost two more inches of room in her skull.

After surgery Emma was sent to the Pediatric Intensive Care Unit (PICU) for close monitoring. It was there, during the first night that we meant the most amazing nurse Ally Wooton. She was with us through our darkest hours, by our side. Words can’t describe what Ally’s caring, kind, compassionate demeanor meant to us that night. As the next couple of days passed Emma’s eyes swelled shut, which the team had prepared us for, but as a nine-month old baby, that frustrated her even more. I can still remember the glimmer of light four days after surgery when the swelling began to go down just enough that Emma could see a little bit out of one eye. She was so happy, and so were we because she seemed a bit more comfortable. By this point we knew we would get to go home soon, at least within the next day or so.

Arriving home was a bit scary, but to Emma she acted as if it never happened, which is why kids are so great. Over the next year we continued with multiple follow-up appointments with all of her specialists and all seemed good.

Over the next few months, episodes of what we thought were seizures began to appear more often, at least every few weeks, which earned us a few more trips to the Emergency Department at Connecticut Children’s. After a couple of trips to the hospital we sat down with Dr. Madan-Cohen and developed a plan of care for when these episodes occurred so we could manage them at home. They were not sure why the seizures were continuing to happen, but it prompted more testing and the results coupled with what the Ophthalmologist found once again with swollen optic nerves, led us to skull surgery number two.

We felt more prepared this time knowing what to pack for the hospital, what to expect with Emma after surgery, and furthermore what our discharge home would be like. As any parents would be, we were still nervous and knew recovery would be tough because she was two now, and how would we ever keep her calm and entertained while she recovers? I knew her facial appearance would once again change, so a few days prior to surgery I began calling around looking for a photographer to take professional photos of her. I already fell in love her with face not once, but twice and knew that it would yet again look different following surgery. I loved that little face so much that I wanted to capture it. When the photographer heard our story she never charged us for the photo session, and as it turned out her daughter was a nurse here at the hospital. The day came, and six and half hours later surgery was done, and Emma was heading to the PICU. To our surprise she did not look very different. They only operated on the front of her skull this time once again placing pins and plates and expanding her head to allow for her brain to have room to grow. Within a few hours after surgery Emma was sitting up in bed eating a banana and a peanut butter and jelly sandwich acting like nothing had ever happened. About five days later we went home, and back to life.

While I was home from work caring for Emma I noticed there was a Craniofacial nurse position that was open so I applied for it, and got the job. I have always said everything happens for a reason, and to me this was proof of that. There is a reason that my daughter Emma has Crouzon Syndrome, and that I am able to work for the Craniofacial Team at Connecticut Children’s as the Clinical Care Coordinator. 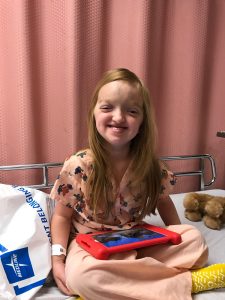 Fast forward to this past March of 2017. Emma was now four years old and loving pre-school. She began complaining of headaches and eye pain, which then moved to what we thought were seizure episodes. She was heading to the school nurse almost daily and when she was playing she would start crying because her head hurt. We went through most of her specialists; ENT, Ophthalmology, Neurology, Neurosurgery, Craniofacial, had an MRI done, and then a spinal tap, which gave us our answer. Emma had too much fluid in her head because her skull was once again smooshing her brain. Dr. Paul and Dr. Charlie (as Emma calls them) began devising a plan to help Emma. By this time, it was May. The plan was that they were going to expand just the back of her head to create more space for Emma’s “smart brain” as she calls it.

We have always been very open with Emma with what is coming for surgeries, procedures or appointments, so we began to prepare her. She started telling her friends and teachers that her “smart brain” needed room so she would have surgery to open up her head. I am not sure how the kids in class handled that, but Emma seemed at ease talking about it.

This surgery took almost 6 hours and titanium plates were placed in the back of Emma’s head. The surgeons were able to go in through the same scar over her head and minimally shaved her head, you could barely even tell. The swelling was minimal, and once again Emma was up eating just a few hours following surgery. Besides some restrictions for a month following surgery, Emma was doing great. Immediately the headaches, eye pain, and seizures stopped. She woke up happy each day and has not complained of any pain since. This should be her last skull surgery, and Emma continues to amaze us each day.

We continue with follow-up appointments with Craniofacial, Neurosurgery, Neurology, ENT, Ophthalmology, Audiology, and Speech Therapy. My husband and I are always so thankful for Emma and how well she is doing. Her and her big sister at the best of friends, and now we try to raise awareness about Craniofacial disorders any way we can. I love Craniofacial, the patients and their families. I don’t wish that Emma had to go through all that she has, but I am grateful that I am able use that to understand first-hand what many of the families go through.