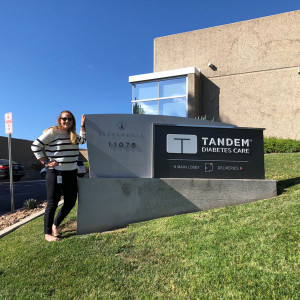 It was Easter weekend 2011, when, on a lark, Annie Cooper pricked her finger with her dad’s glucometer to test her blood sugar. It was sky high. A freshman in high school at the time, Annie remembers wondering if it was all the Easter candy that caused the spike. Her father, a Type 1 diabetic from the age of 21, knew exactly what was going on.

That Monday, her pediatrician sent her to Connecticut Children’s where endocrinologists confirmed she had Type 1 diabetes. How she handled the news from there is emblematic of Annie’s approach to life and the disease and a testament to the care she received at Connecticut Children’s, says her mom, Jennifer Cooper.

“Annie has taken a diagnosis that has pretty life-changing aspects and she’s turned it into a springboard to new opportunities,” she says. “She never felt sorry for herself. She sees diabetes as a challenge as a way to live a healthy life-style and help others who have been newly diagnosed. I really think her experience with everyone at Connecticut Children’s has been a factor in her looking at it that way.”

Annie was a rower in high school and went on to row with the Division I program at the University of Delaware, from which she graduated in June with a degree in sociology. She has run a marathon and half marathon. She has also worked at an American Diabetes Association summer camp in Arizona, where she was a mentor, role model and counselor to little girls. Twice she has served as a panelist at Diabetes Program College Night events at Connecticut Children’s. Everything after high school is doable, she told her college-bound peers.

Her diabetes advocacy work in college is what helped her land her a job with Tandem, a diabetic device company in California. She and other members of the College Diabetes Network chapter at the University of Delaware were taking part in a diabetes awareness event, when she struck up a conversation with a Tandem sales representative and inquired about opportunities. An interview followed and then a job offer.

Having learned a lot about managing diabetes from her dad, Annie says she didn’t use the support programs at Connecticut Children’s Diabetes Program as much as other teens. What she did need, and got from the Diabetes Program team, was the reassurance of knowing they were there should a challenge arise.

While traveling in Europe, Annie says she emailed diabetes program Medical Director Dr. Cem Demirci with a question and got a response from him within an hour. A month after graduating in June, she moved to California to start a job at Tandem and, as the flight was landing, her glucose pump suddenly stopped working. In a panic, Annie texted Michele Perriolat, a registered dietician and certified diabetes educator at Connecticut Children’s, who walked her through how to reset it and gave her gave her instructions for back up.

“She did a good job of calming me down,” recalls Annie, now 22. “Michele and Dr. Demirci are the best support system I could have asked for.”

At Tandem, Annie works in sales and covers the Great Lakes region. She spends her days talking to patients and parents, answering their questions about diabetes and helping them use their devices. Her final appointment with Dr. Demirci before moving was bittersweet, she says.

“I owe him everything,” explains Annie. “He opened my eyes and gave me the confidence and support I needed to find my passion for diabetes awareness.”