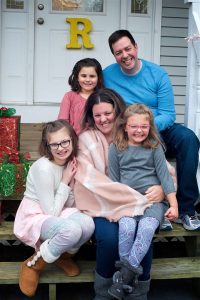 For Amanda and Christopher Renz, pulmonology issues have been a long-standing family affair—along with related medical problems.

“Our journey in the medical world began shortly after the birth of our first daughter, Molly, in 2005,” said Molly’s mother, Amanda Renz. “By the time she reached her first birthday, she had suffered through nearly a dozen ear infections. We spent more time at her ear, nose and throat office than anywhere else. She needed pressure-equalization tubes inserted through her ear drums as well as having her tonsils and adenoids removed. But she continued to have multiple medical challenges that led us to many different specialists, who never seemed to talk to one another.”

“In 2008, our second daughter, Kennedy, was born. She had terrible acid reflux, and we saw multiple specialists, but we still got no answers to help our daughters,” Amanda said. By the time their third daughter, Zoey, was born in 2012, her acid reflux made Kennedy’s look mundane.

“Zoey screamed for hours and days on end,” Amanda said. “We even ended up in the emergency room a few times because she screamed for so many hours and refused to eat.”

“We finally made the decision to try a gastroenterologist at Connecticut Children’s,” Amanda said. “I made the call, and we met Dr. Bella Zeisler, the co-director of the Aerodigestive Disease Program. I liked her very much and instantly felt she would help our daughter. I made an appointment for Kennedy that same day. After six years, we finally got Kennedy the treatment that she needed to properly control her reflux.”

Although it was managed, Dr. Zeisler wasn’t satisfied. She recognized that Kennedy seemed to cough too frequently and mostly with eating and drinking. She referred her to the Aerodigestive Team, a multidisciplinary group of physicians, including specialists in otolaryngology, pulmonary medicine, gastroenterology, speech and language pathology (swallow specialists), and surgery. The team maintains both clinic days and operating-room days where their schedules overlap.

“When we met with the team, we found that Kennedy had been aspirating while eating and drinking,” Amanda said. “Otolaryngologist Nicole Murray, MD, led the team, along with Dr. Zeisler and pulmonologist Craig Lapin, MD. Together, they decided to do endoscopies and an injection in her laryngeal cleft. The cleft is a congenital condition in which there is an opening between the larynx and the esophagus that allows food to enter the lungs.”

“The process made such a difference for Kennedy that we eventually took both of our other children to the Aerodigestive Clinic,” Amanda said. “The team discovered that all three of them needed the laryngeal cleft repaired, and the fixes helped each in different ways: Kennedy coughed much less, Zoey has not gotten croup as many times and Molly has stopped having a constant husky cough.” 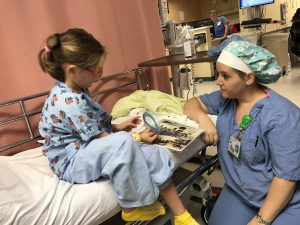 Ideally, the whole Aerodigestive Team will meet a new patient for analysis and diagnosis, sharing observations, questions and conclusions. “We work together on issues that overlap,” says pulmonologist Anne McLaughlin, MD. “It can be as simple as a chronic cough to more complicated cases like major breathing issues, major feeding issues, that sort of thing. So, there’s a pretty big spectrum of patients that we see. But it’s really nice for the patients because they see all the providers at one time and we discuss all the patients at the same time. There’s a lot of overlap—the mouth, the trachea, the esophagus, it’s all right there. One problem can contribute to another, and a lot of times if you’re only looking at one issue and the other things are contributing, the symptoms never get better because you’re not addressing all the things that are contributing to, say, the cough. And that’s where the multidisciplinary approach really comes in.”

That teamwork also applies to treatment: If a child needs to be examined in an operating room with a scope (a camera on the end of a tube that can show doctors what’s happening deep in a throat, stomach, intestines or other part of the body), all three specialists who use scopes will be there together. The team approach minimizes anesthesia time and, more importantly, it maximizes diagnostic accuracy for the child as a whole because each specialist sees not only what they can do to help, but also how each system is affecting the other nearby systems. This allows an extremely sophisticated, unique and targeted treatment plan to be developed.

“This team approach is unique and amazing,” Amanda said. “Instead of presenting one doctor with a list of symptoms, we instead get multiple doctors’ insight and perspective into our daughters’ health. From the minute we arrive for clinic, we are treated as if we are known. The doctors are personal and thorough as they treat each patient as an individual, even three little girls from the same family!”

“Our lives had become a carousel ride of doctor’s appointments, medical interventions and figuring out what was next, until we found this clinic,” Amanda said. “What was three different doctors multiplied by three children became manageable and meaningful when we went to one appointment where these three specialists collaborated and saw our children at the same time. Medications and treatments began to make sense as we stopped simply putting Band Aids on problems and started figuring out why there were problems in the first place.”

According to the Renz family, the team approach to medicine is crucial, especially in systems like aerodigestive, where so many pieces rely on each other to work properly.

“We feel blessed to have a team like this available for our children’s care,” Amanda said.