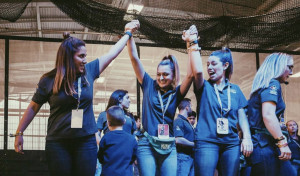 Walking out of the Fieldhouse in February of 2016, after just completing my first HuskyTHON, I was inspired: by the 3,000+ UConn students who came together to prove that there is strength in numbers, by the support given by the entire state of Connecticut showing that there is so much good in the world if you look in the right places, but most importantly by the 50 Miracle Families who show that strength is not shown in size, but shown in heart, passion for others and some pretty great dance moves.

Now, four years later, these feelings stay true as ever. During my time with the HuskyTHON community I have seen the kids at Connecticut Children’s Medical Center do the impossible and for that reason alone we will try to do the same for them. Last year, HuskyTHON raised a record breaking $1,021,485.37, meeting the million dollar milestone for the first time in program history, but more importantly showing the millions of miracles that lie ahead. This was a joyous moment that connected every person in the Fieldhouse to a universal cause, but it was the strength of the kids that allowed for HuskyTHON to feel this moment as one.

Whether it was Gavin having a sword fight in the middle of the Fieldhouse surrounded by thousands of students cheering him on or Abbie and Quinn singing “A Million Dreams” on stage, this night and every night after is dedicated to allowing kids to do what they do best: just be kids. Every kid should experience a childhood full of possibilities and free of medical treatments. One day we will dance in celebration of this dream becoming a reality, but until then we will dance for more laughs, more complete families, more future world changers, and for all the tiny humans who deserve the chance to grow up.

In just two weeks I will step into the Fieldhouse for my final HuskyTHON as an undergraduate student at the University of Connecticut; yet, HuskyTHON and its mission to “Raise Them Up’ will stay with me long after my time in college comes to a close. We are this generation fighting for the next, and this is a fight that requires every single person that wants to make a change in the lives of others. The kids combat the toughest of battles and this is our opportunity to come together and demonstrate the power of unity, but above all, show our little superheroes we can be strong for them.

Learn how you can support HuskyTHON >