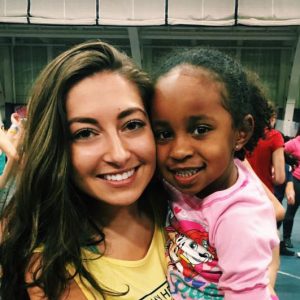 The first time I participated in HuskyTHON as a freshman at UConn, I was nervous. I didn’t really understand what all the hype was about, but I figured if everyone is doing it and chooses to do it every year, it must be fun. When the opening ceremonies began, it started to dawn on me that I would not be sitting for the next 18 hours, and honestly, I didn’t think I could do it. Saying it was easy would be a lie. But there is something about the energy in the field house that keeps everyone going throughout the night. With each additional kid who entered the field house, came more and more cheers and clapping from the students. As the night continued, being surrounded by kids that were treated at Connecticut Children’s Medical Center and their families and seeing them play, dance, and smile made me forget about the fact that I couldn’t feel my feet. That energy replaced the feeling of fatigue with an immense feeling of joy. Once I had experienced it first hand, I had to do it again.

It wasn’t until my second HuskyTHON, this time as a Dancer Representative for my team, that I began to notice that it wasn’t just the 50 families that we invited to attend that received care from Connecticut Children’s, it was also so many people in the UConn community. I couldn’t believe how many of my peers had benefited themselves or knew someone personally who had benefited from the outstanding care at Connecticut Children’s. This only fueled my passion to raise even more money throughout the night. 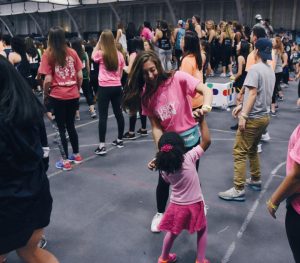 Also fueling my passion was Lily. Lily was one of the HuskyTHON children that my team got to spend the night with that year. She was 4 years old and it was her first ever HuskyTHON! She was nervous during the opening ceremony to get on stage and share her Miracle Word, hers being “Motivation.” Nonetheless, she got up there in front of close to 3,000 college-aged students, and screamed into the microphone. The entire field house cheered louder than they had the entire night and her nervous disposition was replaced with a giant smile. Later that night, she got a Spongebob airbrush tattoo on her arm. I asked her if that was her favorite show. She replied that it was but she only watched it in the hospital. That conversation that I had with Lily validated that this is why we do what we do, so that one day, not a single child will have any memories relating to a hospital, that they will all get the fun, carefree, pain-free, childhood that they deserve. But until we reach that moment, we fundraise all year long, and we dance. So that’s what Lily and I did. We danced the night away! For that night, she got to be a just a kid. There was no talk of surgeries but only if she wanted to go on the inflatable obstacle course for the 5th time in a row.

Now, for my third HuskyTHON, I am extremely honored to be on the 2018 Management Team, and plan the best night of the year with 27 other of the most For The Kids people. This year we have a goal of raising $1,000,000 For The Kids, but we cannot reach that goal without help from people like you! We invite you to be #AllInForTheMillion with us, and give these deserving kids the best HuskyTHON they have ever experienced. Every donation counts, no matter how small. The kids treated at Connecticut Children’s have had to overcome obstacles and show more strength than many of us have had to show in our entire lives. On February 17th, nearly 3,000 people in the UConn community will come together to show our little superheroes that we can be strong for them! Every dollar brings us one dollar closer to our goal and one dollar closer to ending childhood illness. Most importantly, dancing for 18 hours means giving kids the chance to be kids. Together, we can.

Donations can be made at huskython.org

The Connecticut Children’s locations listed below are closed today, August 6, due to power outages: