Science, gymnastics, basketball, Chinese — at age 11, Samara has a lot of passions, and a signature approach to all of them.

“I really like winning,” she says, flashing a megawatt smile. “My classmates voted me ‘Most Competitive’ and I’m proud of it.”

But not long ago, her ambitions were sidelined by health issues. She was exhausted. Her stomach hurt, and she was plagued with digestive problems. It was a distraction at school, where she’s a devoted, curious student, fascinated with science and how bits of knowledge fit together like puzzle pieces. She started missing out on the activities that mean the most to her, including a rigorous schedule of gymnastics. 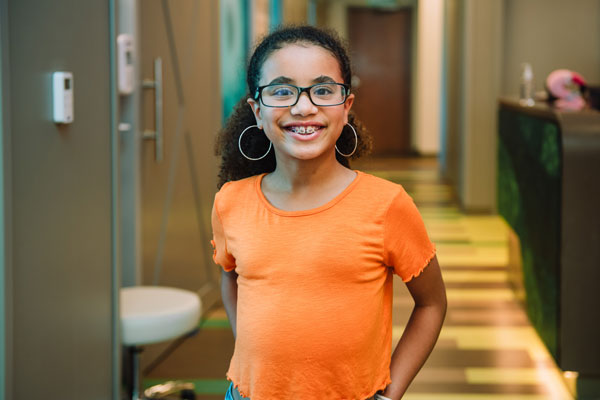 “I would dread going to gymnastics because I didn’t feel well,” Samara says. “But then, when I couldn’t go, I was really sad.”

Looming over all of this were two troubling facts: Despite a healthy diet, Samara was losing weight – and her height had flat-lined for close to a year.

In December 2018, Samara tested positive for Crohn’s disease, a type of inflammatory bowel disease (IBD). The diagnosis explained why Samara had been feeling so poorly and stopped growing, but it opened the floodgate to other questions. Crohn’s is a complex disease, affecting each person differently. It presents specific challenges for children and teens. After a series of mixed messages from Samara’s doctor at the time — and nearly six months of phone tag, but no appointment, with another regional children’s hospital — Samara’s parents, Amber and Joshua, felt overwhelmed.

“We didn’t have a good sense of what was coming or what could possibly happen. It didn’t feel like something that was manageable,” says Amber.

The family needed someone to guide them through the details of the disease, and map out a treatment plan. And after six months of delays, they needed it fast. A friend suggested Connecticut Children’s gastroenterology division, headed by Jeffrey Hyams, MD, one of the world’s leading experts in pediatric IBD.

Three weeks after calling, Samara had her first appointment with Connecticut Children’s specialists. If it weren’t for a family vacation, she could’ve been seen even sooner.

“I just wanted to start feeling better,” says Samara. “Knowing I didn’t have to wait made me very happy.”

Dr. Hyams assembled a team of nurses, nutritionists, other clinicians and even a “patient concierge” to meet with Samara and her family. Crohn’s is a chronic illness, but current research — including groundbreaking work by Dr. Hyams — is making a huge impact on how it’s managed and the quality of life of those affected by it. Dr. Hyams and the gastroenterology team walked Samara and her family through all of it.

“We were given a full sense of how this disease was impacting Samara specifically, and what to expect,” says Samara’s mother, Amber. “It was the ‘Dr. House’ approach to Samara’s care – a whole, united team that could help us put the puzzle together.”

“A multidisciplinary approach to disease control benefits everyone,” says Dr. Hyams. “As we search for solutions, the whole patient is cared for — meaning a greater probability to diagnose and then decrease or completely eliminate symptoms.”

“It’s had its perks”

First, the team needed to heal Samara’s intestine inflammation, which had directly impacted her growth. Samara was placed on a regular schedule of intravenous (IV) medication; about once a month, she comes to Connecticut Children’s new infusion center, where she is hooked up to an IV for several hours.

These appointments are more fun than they sound. Connecticut Children’s infusion center, which opened in April 2019, is one of the first in the nation to provide patients with a fully interactive environment. During infusion treatments, which take place under canopies of digital trees and personal lighting controls, Samara can create her own avatar and explore another world. The experience gives kids a sense of control, and creates a community that reminds them that they’re not alone in their treatment process.

“I was really angry when I was told I had Crohn’s,” says Samara, “but it’s had its perks. The infusion center is awesome! I get to play virtual reality games.”

The medication, along with a tailored gluten-free nutritional plan, yielded quick results. In one month’s time, Samara gained 10 percent of her body weight. She started feeling better too. “I have a bunch of energy,” she says. “At this point my diagnosis doesn’t affect me too much.”

She’ll continue getting infusions every month or so, closely monitored by Connecticut Children’s gastroenterology team.

“Dr. Hyams has been wonderful,” says Amber. “He’s always listening and paying attention to all the different things Samara wants to be able to do.”

“There are so many opportunities”

And there is a lot Samara wants to do.

She recently started playing basketball. She’s back at gymnastics, practicing twice a week and competing with her team. She has big, broad plans for her future: “I want to travel and see more places in the world,” she says. “I like being in exciting places.”

At school, she’s as focused as ever. “I like Chinese because it’s nice to be able to communicate,” she says. “And I especially like all kinds of science. It’s cool to learn about how things work and see it all come together.”

As for career dreams? “It’s really tough for me to decide,” she says, “because there are so many opportunities.”