Written by grateful mom, Christina B. 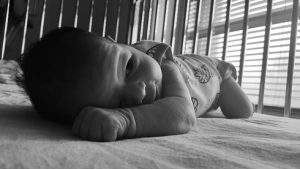 We had spent a total of twenty-one long days at Connecticut Children’s Medical Center. At only five days old, Fiona became unresponsive when it came time to nurse on a Sunday evening. She had what was considered to be an abnormally low body temperature when taken rectally.

I was persistent, telling Ryan, her father, that something wasn’t right. He insisted she was just sleepy, she was a newborn, after all. I didn’t buy it.

After being transferred to Connecticut Children’s Medical Center by ambulance from our area hospital, Fiona had a brief spell where she momentarily stopped breathing. Once stable, she was admitted to the PICU, where she was monitored closely for about forty-eight hours and began vigorous antibiotic treatment for an unknown infection. At this point, Fiona’s team of doctors could not tell us if she would be okay.

As her vitals continued to stabilize, Fiona had been moved to a general hospital room upstairs. She continued to be closely monitored. Miraculously, she had been able to maintain her body temperature at a healthy 98.6 degrees Fahrenheit, all on her own (a first since birth)! Her activity levels had greatly increased. She had opened her eyes, finally, and began responding to noise and was able to show she had begun to regain her strength. Fiona, with her tiny little hands, held on to my finger so tight for the very first time. A moment in which at one point, I never thought I’d get to experience with her.

Fiona had gone through countless blood tests and cultures, urine tests, attempted spinal tap, x-rays, CT scan of the brain, as well as an MRI on her brain. Thankfully, the tests that were successfully taken had all come back normal.

The morning of our sixth day at Connecticut Children’s Medical Center, we were given the official diagnosis of bacterial meningitis, and would be here for an additional sixteen days to continue her treatment. Later that afternoon, she was brought down to the operating room to put in a central line for her antibiotic treatment for the remainder of her stay. 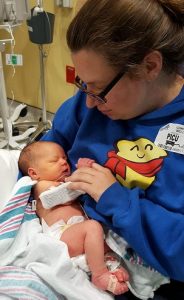 Over the next few days, Fiona’s team of doctors felt it was only necessary to monitor her oxygen levels continuously, rather than all of her vitals. She was now down to two wires instead of being hooked up to five! Fiona had the appetite of a healthy newborn baby and was dirtying diapers appropriately. Her weight gain was considered “stellar” on multiple occasions, even after going through many tests and procedures in which she had to fast.

I felt like we were hitting different milestones with Fiona than the norm… mainly because, looking back, we were. At two weeks old, Fiona’s team decided it was safe to transfer her to the Connecticut Children’s unit at Saint Mary’s Hospital in Waterbury. This was much closer to home, and better yet, being able to transfer meant that Fiona no longer needed all that the Hartford campus had to offer. At this point, she only needed to be hooked up to the monitor while she was sleeping. Her apnea, which was considered normal for a newborn at this point, was nearly nonexistent!

Only a few days after arriving at Saint Mary’s Hospital, Fiona was doing so well that she was taken off all monitoring. She only needed to have her vitals checked every eight hours, which was the same amount of time in between when she was due for her antibiotics. As the days passed, she became stronger and stronger, continuing to act like the typical, healthy newborn we had hoped for.

Finally, it was Monday morning, the morning of Fiona’s discharge date. I walked out to my car to get Fiona’s car seat ready for her. Upon coming back to the 4th floor, Fiona’s nurse was at the door waiting for us. She handed me my precious baby girl, just shy of one month old. For the very first time in three weeks, I was able to hold my newborn daughter and walk with her, free of any wires! My baby girl, so strong… she made it!

Later in the morning, Fiona was due for a hearing test, since hearing loss is a common long-term affect for those diagnosed with meningitis. To our surprise, Fiona had what is considered to be normal hearing. She could perceive speech 100%, but had some damage to her left ear. She is unfortunately unable to hear some higher pitched tones. If hearing loss is all we have to deal with, we’ll take it, especially if it means our baby girl is healthy and home with us at last. 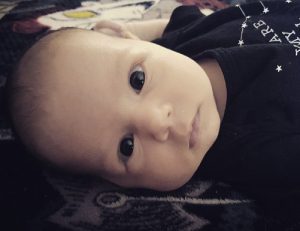 We are beyond fortunate and forever grateful for Fiona’s outcome. If it wasn’t for the amazing team at Connecticut Children’s Medical Center, both Hartford and Waterbury campus, I don’t know where we would be. Things like this are not supposed to be anyone’s reality… At one point we feared the worst.

Now, in just a few short days, Fiona will turn two months old. Thanks to Connecticut Children’s Medical Center, Fiona is thriving, and we are so happy she is here with us today.

BROWSE BY CATEGORY
BROWSE BY MONTH
Show More Show Less
Newsletter Sign-up
Want our latest Blog posts sent directly to your inbox once a month? Sign-up below.
Subscribe
Social Media
Back to Top