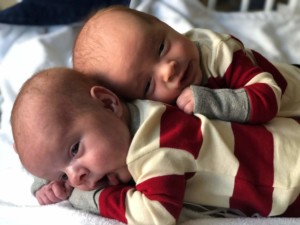 When Amanda and Derek Williams learned they were expecting twins, they knew they would be introducing their two year old son to a doubly fun big brother experience. But stockpiling on diapers, wipes and onesies took an immediate backseat when one of their little boys was diagnosed in-utero with aortic coarctation – a congenital condition where the heart’s main blood vessel carrying oxygen-rich blood from the left ventricle to all other organs is narrowed.

Notwithstanding, they were excited for the big day they could meet their sons – Bennett and Chase – knowing that Connecticut Children’s divisions of neonatology and cardiology would offer nothing but the best care. The Williams had a team and plan in place. They were ready.

A Day Full of Surprises

On October 4, 2018, Bennett and Chase – identical twins – made their grand entrances at 35 weeks gestation. Both brothers were placed in the Neonatal Intensive Care Unit (NICU) for monitoring and new discoveries were made when nurses were unable to insert a feeding tube into Bennett’s stomach. Hours after birth, little Bennett was diagnosed with Type C Esophageal Atresia with Tracheoesophageal Fistula – meaning that Bennett would not be able to properly eat or gather nutrients nor display proper breathing function because his esophagus was not disconnected from his air passage.

Within his first week, Bennett underwent surgical repair of the heart, performed by Clinical Director, Cardiovascular Surgery, Dennis Mello, MD. At week two, Brendan Campbell, MD in the Division of General Surgery addressed Bennett’s esophagus. Both procedures were successful and Bennett is now home – healthy and happy – but it took a while to get there.

Home Away from Home 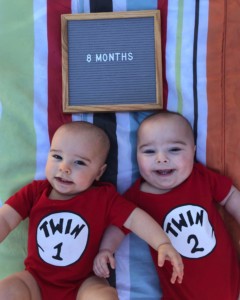 “In total, we spent four and a half months in the NICU,” says Amanda. “If it wasn’t for the nurses and physicians, I am not sure we would have gotten through it.”

Amanda recalls she and Derek felt split in trying to care for two babies – one healthy and the other recovering – and a busy toddler, who also is on the autism spectrum. Chase, Bennett’s twin, would make the visit to Connecticut Children’s NICU every morning with his mother and stay most of the day. Whenever Chase would become too fussy, Amanda remembers, other NICU nurses would cuddle and care for him so she could tend to Bennett’s needs.

“They were always so attentive. When you place your most precious possessions in someone else’s hands – literally – the team that cares for them become like family. We spent so many ‘big days’ at Connecticut Children’s – Thanksgiving, Christmas, New Year’s … staff made sure we got to celebrate these big things in little and not so little ways. They even got Santa to come visit the boys!”

Treating the whole patient is the goal at Connecticut Children’s and aligns with the goals of the Neonatology division, says Annmarie Golioto, MD, Medical Director, NICU East. Because babies can’t communicate their needs in ways clinicians can understand, partnering with parents and other family members is key to successful outcomes. Parents and care-givers are encouraged to participate in daily rounding with the clinicians and offer suggestions on how they would like to see care managed.

“We strive for family-centered care. If a mother or father feels heard and are actively involved in their baby’s care, the baby can only benefit. Everybody that comes here to work every day wants to give their genuine best. Their hearts are in the right place and they are also extremely capable. You can’t ask for better than what we have,” says Dr. Golioto.