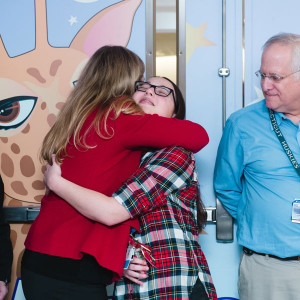 When Rose Robison first glanced at her daughter Brianna’s Christmas list, she was expecting to find all the trappings of a 15-year-old’s desires: clothes, jewelry, accessories, and so on. What she didn’t anticipate, however, was a written request to meet the Connecticut Children’s Medical Center’s NICU staff at UConn Health in Farmington that saved her daughter’s life.

“I was surprised this made her top 10,” said Rose. “I thought to myself, ‘How many 15-year-olds would ask for something like this?’ Brianna had mentioned a few months earlier that she’d love to at least speak with her NICU doctor via phone, this made me realize this needed to happen.”

On July 20, 2003, Brianna was born at 23 weeks and six days, weighing at 1 lb., 5.2 ounces, delivered via caesarean section. She spent her first four months under the care of Ted Rosenkrantz, MD, and several nurses. Prior to this past Christmas, Brianna had never met or spoken to the NICU staff.

“It would be one thing to talk to them over the phone, but I wanted to know what they were like, what they looked like, and to be with the people who cared for me for the first four months of my life,” said Brianna. “Ultimately, I wanted to thank them for saving my life.”

On Christmas night, the Robison’s were in the midst of a board game marathon when Brianna’s sister pulled out what Brianna thought was a new game.  Instead her sister, Isabella, read the story Rose wrote about Brianna’s birth leading all the way to the time the family would visit Connecticut Children’s NICU at UConn Health to meet the people who played a role in her development. It just so happened to be the following day.

“It was incredible how this managed to come together,” said Rose. “One day, I was driving home from New Hampshire, and on a whim, I called the NICU. When I got in contact with the nurse manager, I was surprised when she confirmed that Dr. Rosenkrantz and some of the nurses were still there and excited to meet Brianna. It wasn’t a matter of how they can make this happen, but when.”

When Brianna and Rose arrived in the company of various family members, they were greeted by Dr. Rosenkrantz and Carrie Racicot, who was the night time nurse for many shifts while Brianna was in the NICU. Racicot arrived at her shift three hours early to meet Brianna.

“They were very warm and welcoming,” Brianna said. “Dr. Rosenkrantz answered all my questions and explained everything to me. It was very interesting.”

Dr. Rosenkrantz showed Brianna the giraffe incubator—how its four pillars look like legs, and how the body has an extending arm that looks like the neck. The giraffe incubator was the only one in the NICU at the time of Brianna’s birth, and she was the first baby in it.

“Seeing pictures of myself, to see what I looked like, to see a baby my size was really eye-opening,” Brianna said. “It gave me a better perspective of the work they did. Growing up, I loved giraffes, so I never put two and two together until recently.”

Rose attributes Brianna’s well-being to the work Dr. Rosenkrantz and the NICU nurses, as Brianna is in perfect health.

“When they first saw Brianna, the look on their faces were priceless,” said Rose. “They were happy to see such an amazing outcome. We thanked them a million times, but Dr. Rosenkrantz said we should thank ourselves, our family for providing support, love, care and for Brianna for being so strong. It was very humbling.  Needless to say, it was a very emotional day for Brianna and our family.”