My daughter Skye is nine months old, and the happiest child. Like most children her age, she loves to explore her world physically. Skye will reach and touch, respond to sights and sounds, and especially enjoys playing with her four year old big brother, Julius. Without the treatment she receives from Connecticut Children’s, I know Skye’s interactions with the world would be limited.

When I brought Skye for her one month checkup, I shared my concern about her hips. Skye’s pediatrician recommended I see a neurologist at Connecticut Children’s, where she was diagnosed with Spinal Muscular Atrophy Type 1 (SMA). SMA is a hereditary disease that impacts the nerve cells in the brain stem and spinal cord that control speaking, walking, breathing and swallowing, leading to muscle weakness and atrophy. The disease generally manifests early in life and is the leading genetic cause of death in infants and toddlers.

Soon after her diagnosis, she became very sick and was admitted to the hospital for three weeks. At two months she began a course of treatment that included a medication to help improve motor function. At seven months she received a gene therapy treatment known as ZOLGENSMA.

Skye was the first child treated with gene therapy at Connecticut Children’s. Gyula Acsadi, MD, PhD, division head of neurology and Skye’s neurologist, told me she was the perfect candidate for ZOLGENSMA. She has the most severe form of SMA and she was in the right age range for that drug. I know that it was very time consuming for Dr. Acsadi to get approval in order to give Skye the gene therapy treatment, and we feel lucky to have him as Skye’s physician.

I spend a lot of time reading and researching everything I can about SMA. I know that if it weren’t for this treatment she would probably already have a feeding tube, respiratory assistance and limited mobility. Instead, she is almost sitting, her head and neck are really strong, and she is reaching above her head. Every week we see her reach new milestones.

Children with SMA often have a number of breathing issues, which are caused by weakened chest muscles, making it difficult to fight off respiratory illness. Skye was sick with a cold a few weeks ago, and I didn’t have to bring her to the hospital. Skye’s treatment made her strong enough so that we could treat her right at home. Luckily, we didn’t end up in the hospital during cold and flu season! We were even able to have friends visit, which would have been too dangerous if Skye weren’t receiving these treatments. 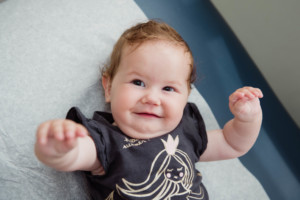 Having gone through this experience with Skye, I am so happy that Connecticut approved a mandatory newborn screening for SMA. It is important every child receive screening for SMA as early as possible because there are treatment options available that work particularly well if diagnosed early. I have not seen any side effects from Skye’s treatment. Instead, all I see is my daughter is getting healthier and stronger. The world of SMA is expensive, and I admit it is a struggle. However, when you see your child getting better, you see the future in brighter colors.