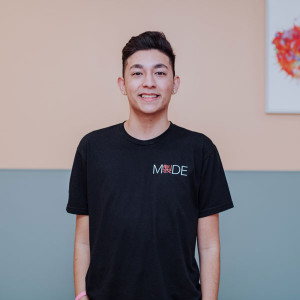 David Alvarez III, 18, is a typical college freshman. He’s concerned about his classes at the University of Bridgeport, where he’s pursuing a bachelor’s degree in business management; studying for tests; getting his homework done; and spending time with friends.

But on top of those concerns, David makes time for regular appointments at Connecticut Children’s Medical Center in Hartford. David receives ongoing therapy for spinal muscular atrophy (SMA), a rare genetic neuromuscular disorder. In people with SMA, neurons that transmit signals from the brain through the spinal cord to the muscles are lost, which prevents the muscles from receiving the brain’s signals. This can lead to muscle weakness and deterioration, called atrophy.

It would be easy for someone in David’s position to be upset or angry. But rather than letting his condition get him down, David has worked hard to stay positive. With the help of advanced treatment for his SMA at Connecticut Children’s, David now shares his encouraging outlook with other young people through his own clothing business.

David’s mom, Madeline, noticed that something wasn’t quite right with David early on. “In kindergarten, he was always on his tiptoes, and his soccer coaches shared with me that he was slower than the other players,” Madeline says. “Plus, he was always falling down.”

Madeline brought these concerns to the attention of David’s pediatrician, and then Madeline and David began seeing an orthopedic specialist to search for answers. It was a slow process that didn’t yield results. When David was 11, he underwent a muscle biopsy to test for muscular dystrophy, which came back negative. “The doctor told me we had to keep searching for what was wrong with David, because otherwise, he was going to be in a wheelchair by the time he was 13,” Madeline says.

The Alvarezes wanted David to live as normal of a life as possible, so they decided to stop the testing. David stayed active in basketball, football, soccer, karate and swimming, but he still lagged behind his peers. On family outings to parks, David would have to rest after five or 10 minutes of walking, and he had to cross streets at the corner ramps because he couldn’t lift his legs over curbs. When he was 15, David told his mom that he was having trouble getting up and down the steps on his school bus, so she started taking him to school.

Through it all, however, David remained positive. “It never deterred me,” he says. “I never was like, ‘Well, this is my life, and I’m gonna be unhappy.’ I was always having fun, and I was happy. I know a lot of people would say they can’t do this or that because they have a medical condition. I might not have been able to do a lot of things, but at least I could say I’d tried.”

Just before David turned 17, his pediatrician was retiring, and Madeline requested his medical records. “I started reading through David’s records, and I realized we’d never been referred to a neurologist,” Madeline says. “My husband suggested we look for someone in Hartford.”

That led Madeline to Gyula Acsadi, MD, PhD, head of the Division of Pediatric Neurology at Connecticut Children’s Medical Center. “He seemed like a great, awesome doctor,” Madeline says. “I decided we should make an appointment with him. Thank God we did.”

After Dr. Acsadi met with David, Madeline recalls that he had a look that seemed to say he knew what was wrong with David, but he wanted to be sure. He suggested that David undergo genetic testing, and they agreed. The test results showed that David had SMA.

“You never want anything bad to happen to your child,” Madeline says. “If it could be me, I’d rather it would be me. I didn’t know what SMA was. I was heartbroken, and I started to cry.”

Dr. Acsadi told the family that he understood he wasn’t delivering great news, but there was hope. The U.S. Food & Drug Administration recently had approved a new therapy, Spinraza (nusinersen), to treat SMA.

Spinraza works by increasing the body’s production of spinal motor neuron protein, which helps preserve the neurons that transmit signals from the brain. The treatment begins with a series of loading doses, which help doctors get a good level of medication into patients’ spines to start. The first three doses are given every 14 days, with a fourth dose given 30 days after the third. After that, patients receive maintenance doses every four months to sustain their medication levels.

David is in the maintenance-dose phase of his treatment, so every four months, he visits Dr. Acsadi to receive his Spinraza injection. At each treatment session, Dr. Acsadi inserts a needle into David’s spine and withdraws 5 milliliters of cerebrospinal fluid. Then he injects 5 milliliters of Spinraza into David’s spine. Every milliliter is taken or given in one-minute increments, so David has to lie still for 10 minutes with the needle in his spine.

“It’s a little invasive — I’m not gonna lie,” David says. “But with Dr. Acsadi, after we’ve done it so many times now, I’ve gotten more comfortable with it. The whole process is pretty quick.”

David’s whole family comes with him to every appointment: Madeline; his father, David Jr.; and his little sister, Ariana, 10. Ariana holds David’s hand during each of his injections.

Since he started receiving Spinraza injections, David has noticed tremendous improvements in his physical abilities. “After my first loading dose, I came home and went to bed, and my left arm was hanging over the edge of my bed,” David remembers. “When I woke up, I was able to raise my arm at a 90-degree angle. I never could do that before. It might not seem like much to most people, but to someone with SMA, that kind of thing is major.”

As David has continued his Spinraza treatments, along with physical therapy, he’s grown stronger and healthier. At the beginning of 2018, David weighed just 108 pounds. One year later, David has put on 22 pounds of muscle with his new ability to work out and lift weights. “I feel stronger, and I look stronger,” David says. 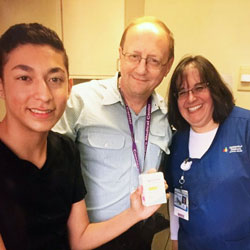 David and his mom are grateful for the outstanding care he has received from the neurology team at Connecticut Children’s. David says Nanci Stolgitis, Dr. Acsadi’s nurse (pictured here with David and Dr. Acsadi), is “the most caring, loving person. She’s awesome. I love her.”

“Dr. Acsadi’s been like our superhero,” Madeline adds. “He gave us hope. It’s just the kind of person he is. He’s humble and kind, and he really listens. He’s the best doctor I’ve ever met.”

Madeline said the entire team at Connecticut Children’s has been wonderful to their family. “The minute we walk into the hospital, they go out of their way to make my daughter — who isn’t even a patient — feel comfortable,” she says. “I recommend them 100 percent.”

Big plans for the future

With his newfound strength and his optimistic outlook, David is focused on his university studies and developing his clothing line, MADE Clothings. MADE is founded on David’s message of having a hopeful attitude and overcoming adversity. He plans on traveling to schools around Connecticut to speak about MADE Clothings and the power of love and happiness.

David has high hopes for the years to come. Though he admits that “Mom’s probably not going to like hearing about this,” he hopes to be living in Los Angeles in five years, growing MADE and spreading his message of positivity and perseverance.

David knows his Spinraza therapy will play an important role in his plans. “I hope to be in peak physical condition in my 20s,” he says. “I’m excited to see what the future holds. Life is good right now, and I’m happy, but in five years’ time, I think it’ll be even better for myself and my family.”

“I look at David now, and I’m just so proud of him,” Madeline adds. “I’m the happiest and luckiest mom in the world to have a son like him. The way he’s grown, the way he shares his story with others and encourages them, it’s great. If he can overcome what he’s been through to get where he is now, you and your family can too.”

To learn more about Spinraza therapy and whether your child might benefit from it, contact our neurology team.