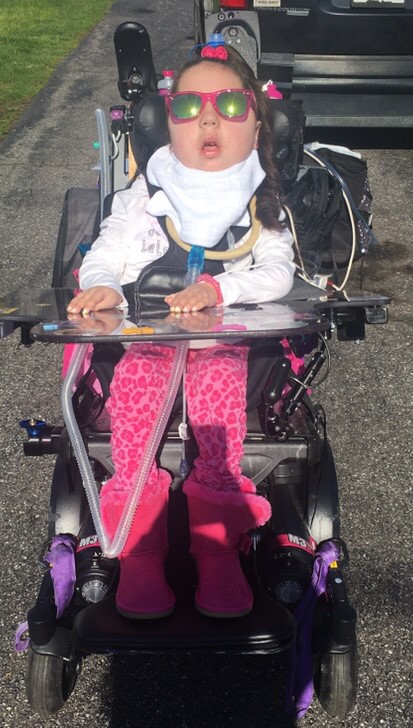 When my daughter Eva was a baby, someone called her “Eva the Diva.” At the time, we didn’t realize how much she was going to really grow into that name. She’s strong-willed and does what she wants when she wants, but she lives a very happy life. She loves swimming, shopping, visiting amusement parks, and everything Disney and “girly.”

When Eva was 6 months old, she was diagnosed with spinal muscular atrophy (SMA) type 1. SMA is a hereditary disease that impacts the nerve cells in the brain stem and spinal cord that control speaking, walking, breathing and swallowing, leading to muscle weakness and atrophy. Eva’s disease affects most of her physical movements including the ability to breathe, cough and swallow. She would never sit, stand, crawl or walk. She was admitted into the hospital when she was 7 months old and spent 4 months there. As she became unable to breathe on her own, she had a tracheostomy tube inserted at 10 months old. The tracheostomy tube was connected to a ventilator to assist her breathing, which she required 24 hours a day. At this same point, because she was unable to swallow food, she had a gastrostomy tube (g-tube) inserted. The g-tube connects to a feeding pump, which enabled her to eat. After four months in the hospital, Eva was able to go home with around-the-clock nursing care.

Eva, who is now 8 years old, is non-verbal due to her tracheostomy, but she has many ways to communicate. One of those would be by using her tobii dynavox speech device that she uses with her eyes to communicate and for school work. Many people don’t realize SMA does not affect the brain, so there is no reason to put her in a special education classroom. She attends first grade and enjoys being challenged. In her spare time, Eva enjoys cheerleading on the Pop Warner Challengers Team, which is for children with special needs, and spending time hanging out with her older brother Noah. We do need to keep Eva home from school during cold and flu season. When you are sick and your body creates mucus, you develop a strong cough in order to clear the mucus. When a child has SMA, their muscles are too weak for a strong cough, trapping the mucus in the lungs and making it difficult to breath.

Gyula Acsadi, MD, division head of neurology at Connecticut Children’s, has seen Eva since she was 3 years old. I have always been impressed by how hard he fights for the children to get them what they deserve. You can tell he really cares for his patients and wants to find them the best treatment possible. Case in point: Dr. Acsadi suggested we take part in a drug trial for SPINRAZA, a new medication that has shown promising results in treating SMA. When the SPINRAZA drug trial was approved by the FDA in December 2016, we started this treatment and the results have been amazing!

In the 2 ½ years since Eva has been on SPINRAZA her health has greatly improved and she has grown noticeably stronger. Prior to this treatment, Eva would be admitted to the hospital due to illness two or three times a year. Now instead of being admitted to the hospital, she’s been able to fight her illnesses at home and recovers much more quickly. She is on her 11th SPINRAZA treatment and we are still seeing improvements. I am sure at some point it is going to plateau, but we continue to see more movement than she has ever had.

We have always felt that Dr. Acsadi really cares for his patients, but I have noticed the same compassion across the entire team at Connecticut Children’s. SPINRAZA is given as an injection into the fluid in the spine during a medical procedure called intrathecal injection so we have worked with radiology, sedation services, and respiratory and everyone has just been wonderful. Eva is also a patient of Mark C. Lee, MD in orthopedics and will be having scoliosis surgery this summer. Although I am nervous about surgery, all of the wonderful experiences I have had with everyone at Connecticut Children’s makes me feel so much better. She has always had excellent care and everyone is always very helpful and knowledgeable.

If another parent was considering starting SPINRAZA treatment for their child with Dr. Acsadi, I would want them to know that the results are life changing! They have increased her strength and her movement but more importantly stabilized her respiratory condition.

Sign up to receive the latest news and blog posts from Connecticut Children’s via email!