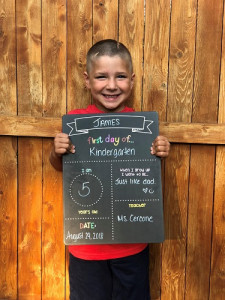 My younger son, James, is 5 years old, and he has two settings: off and on. When he’s on, he goes full speed. He keeps me on my toes, but he’s always happy. He loves to play video games with his older brother, Nathan, who’s 10. James doesn’t sit down much. He’s into anything that’s active. At kindergarten, James likes less-structured activities, such as gym class, and creative outlets, such as art.

It’s incredible that James can do so much and be so active, because at one point, I was terrified my son would never be the same after he suffered a skull fracture. At the time, the doctors told us he might never speak again.

Today, James never seems to stop talking! You can hardly notice anything happened to him. James is our little miracle, and we owe it all to Markus J. Bookland, MD, and the amazing Neurosurgery team at Connecticut Children’s.

A sight no parent ever wants to see

I remember the exact date: It was Nov. 5, 2016, and I was doing some yard work. We had the garage open, as we were in the process of doing additions and renovations to it. My husband, Al, had recently built a set of stairs up to the second floor that we were finishing.

James, who was 3 at the time, went up that flight of stairs. We didn’t have the floor done up there yet, so little James took a step onto the insulation — and stepped right on through. He fell 9 feet onto the garage floor. I heard something in the garage, but I wasn’t sure what had happened, so I went to investigate. That’s when I found my little boy lying there.

I scooped James up and ran into the house, calling for Al and Nathan. We live five minutes away from Connecticut Children’s, and Al and I agreed that we could get James there faster than if we called for an ambulance. We jumped into the car and drove there as fast as we could.

‘They sprang into action’

When we got to Connecticut Children’s, I ran inside the emergency department to get help. They sprang into action immediately. I hope I’m never in that kind of situation where I have to see it again, but the way everyone moved was incredible. There was a sense of urgency, of course, but no one looked panicked. It was reassuring to know these people had this under control.

They got James and me into a room, and I gave them details about what happened. Naturally, I blamed myself, but they comforted me. “It’s not your fault, Jenn,” they told me. “It was an accident.” At the same time, the Connecticut Children’s team had people talking to Al and Nathan, who were waiting in the hallway. The team even had a child life specialist there to speak with Nathan so they could see how he was. While the Emergency Medicine and Neurosurgery teams saw to James, they still took time to care for the rest of our family as well.

I’d been in denial about how bad James’ injury was, thinking maybe he’d just bumped his head and everything would be fine. But then Dr. Bookland came and talked to Al and me about the situation. He said James’ brain was swelling, and the team needed to perform a craniotomy on James, which would involve removing part of his fractured skull to reduce the risk of brain injury by allowing the brain to swell safely. We agreed, and they got him into surgery. It seemed like forever since I rushed into the emergency department, but when I looked at a clock, it had only been a half-hour since we’d arrived.

The wait – and the support

James’ neurosurgery took three hours. Afterward, Dr. Bookland talked to Al and I in the waiting room. He said James had made it through the surgery. However, Dr. Bookland was concerned that, because the injury happened in the area of the brain responsible for speech, James might not be able to speak when he woke up. There was nothing to do but wait and see.

The team placed James in a medically induced coma with a breathing tube, and he remained like that for six days so he could heal and recover safely. James was in the pediatric intensive care unit (PICU), and the Connecticut Children’s team gave me a room on the PICU floor where I could stay at night, so I didn’t have to be far away from him. I stayed with James pretty much 24 hours a day, leaving only in the mornings of school days so I could help Al get Nathan off to school before heading right back to the hospital.

We had such wonderful support during our stay. Nurses Michelle Boivin and Brenden Orsi were on duty the night we came in. Michelle would take the time to answer my questions, and she explained events that happened and why they happened so I could understand them. She told me it was OK to be scared, which was reassuring, because I was terrified. Michelle and Brenden were on duty with James for three of those six days, and they got to know James so well that Brenden could tell James was about to try fighting off his sedation before it ever happened so they could work to keep James safely sedated.

On the sixth day, James could breathe on his own without the breathing tube, so the team pulled him out of his sedation and waited for him to wake up. That day was better than the day James was born, because when he woke up, he said, “Mom?” That was such a relief. I said to myself, “OK, he can talk; we’re good.”

Going home and the road to recovery 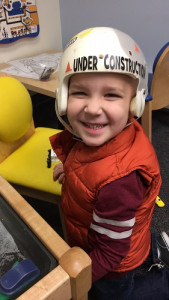 After James woke up, the team moved us from the PICU to the sixth floor. We learned James would need to wear a special helmet to protect the area of his brain with the missing section of skull until his repair surgery later on. The Hanger Clinic, which has a location within Connecticut Children’s, made James a customized helmet during his stay. I wanted James to have a sense of humor about the situation and not worry so much about his helmet, so I ordered some stickers online with bulldozers and a sign that read “Under Construction.”

Two weeks to the day after James’ fall, the team said we could take him home until it was time for his skull-repair surgery. James walked out of the hospital on his own, which was a remarkable feeling for me.

In mid-December, we went in to see Dr. Bookland again, and James had another CT scan. The scan showed James’ brain swelling had gone down, so the team scheduled James’ repair surgery, called a cranioplasty, for Dec. 19 with Dr. Bookland. The second surgery went great. I learned they had frozen the portion of James’ skull they had removed during his craniotomy and saved it for the cranioplasty, rather than using a plate. Dr. Bookland told us that using James’ skull would be better for James, and the surgical team would only need to use small connector plates to put the pieces back together again.

After the procedure, we stayed in the PICU overnight. It was nice to see all the familiar faces there, and the nurses were excited to see James. They said he was a little miracle.

We had kept James out of his preschool since his accident. Even with his helmet, we didn’t want to risk him getting hurt. But after the repair surgery and getting cleared by the Neurosurgery team, James went back to school in January like nothing had ever happened, aside from having a large “C”-shaped scar from his forehead line to behind his ear.

James saw Dr. Bookland every six months after that so they could continue to monitor his progress. In July 2018, the Neurosurgery team released him. However, I called Dr. Bookland in January 2019 to ask his opinion about a stutter James has recently developed. We can’t be sure if this is related to James’ injury, but Dr. Bookland recommended that we consult with the Connecticut Children’s Speech-Language Pathology team. Now James attends speech therapy appointments so they can work on the stutter. Dr. Bookland reminds me that there was a high chance James would never speak again after his accident, so if he comes away with a stutter that we can work on, we’ll take that.

Today, James has no memory of his accident. We’ve explained that he hurt himself and that’s why he sees Dr. Bookland. Al and I will explain to James about his accident and injury later on.

Nathan knows James was hurt, and he knows he had to wear a helmet for a while, but he doesn’t comprehend the full scope of how serious his brother’s injury was. Al and I thought that was too much for him to handle at the time. We didn’t want him to worry or be scared for James. When Nathan gets older, we’ll explain more about James’ accident and treatment.

One of the ways I coped was by writing about James’ accident, surgery and recovery. The day after the accident, I started a blog where I could update friends and family members on James’ condition instead of making 50 separate phone calls every evening. I didn’t realize it at the time, but some of our loved ones shared the link with their networks, and there was a whole group of people whom James had never met following his progress and rooting for his recovery. I haven’t updated the blog in a while, but it’s a pretty thorough record of the thoughts and feelings I experienced at the time. It was therapeutic to work out my feelings as best I could, and I encourage other parents in that sort of difficult situation to find a healthy method of self-expression.

My biggest personal struggle since James’ accident is not to become a “helicopter mom.” I know he needs room to grow and develop, but it’s hard sometimes to let him be a typical 5-year-old when I know how close we came to losing him. We’re so lucky that he walks and talks and is perfect. 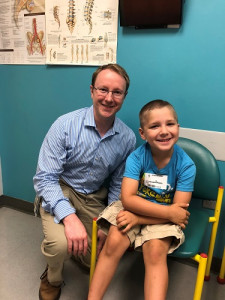 The thing that has changed the most for us as a family is that we realize how fortunate we are. We have a second chance with James, and Connecticut Children’s is the reason we have that chance. Their expert care is what has allowed us to watch James grow and flourish.

The fact that James can talk — and, boy, does he talk — that’s amazing to me. He’s my little chatterbox. Sometimes, like any parent might, I find myself getting annoyed at how he’s always talking. But then I think to myself, “OK, Jenn — he could have lost that, remember?” It would be devastating to never hear his voice again.

We interacted with a lot of departments and teams at Connecticut Children’s during our time there, from Emergency Medicine and Neurosurgery to the teams on the PICU and the sixth floor, and now speech therapy. We were lucky to have such expert care. Whatever we needed, they were there to help us. They make you feel like there’s nothing to worry about because they have this situation under control for you.

Whenever I talk with the people at Connecticut Children’s, I thank them for what they’ve done for us. I can never say “thank you” enough. It’s not a big-enough gesture to truly express how I feel about everything they’ve done for my son and our family.

Connecticut Children’s is a Level 1 trauma center, verified by the American College of Surgeons. To learn more about our expertise, please contact our Neurosurgery team.