By Kathleen Mayko and Tony Sabonis, Maeve’s and Rowan’s parents 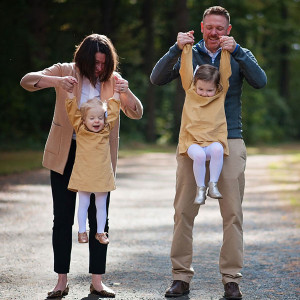 Our daughters, Maeve and Rowan, are typical precocious little girls. Maeve, 4, started preschool in fall 2018. She’s bubbly and vivacious, and she likes reading, dancing and animals. She lights up a room with her energy. She loves being outside, loves going to the library, and can write her name and count to twenty. Rowan, who turned 2 in February 2019, likes a lot of the same things as her older sister and follows her lead in interests. Rowan is adventurous and inquisitive. She’s the first to climb, jump or explore and loves asking “why?”. Each of our girls calls the other her best friend.

Looking at Maeve and Rowan today, you’d never know they each had neurosurgery within months of their births to correct craniosynostosis, a rare condition that involves a premature fusion of the bones in the skull. We were lucky to find Dr. Jonathan Martin, an expert in the treatment of craniosynostosis, as well as his wonderful team at Connecticut Children’s Medical Center. We owe our girls’ good health to them.

We tried for a long time to have children, so we were thrilled when we learned we were pregnant with Maeve. But when Maeve was born, we noticed that she had a misshapen head, with a pointed ridge on the back of her head. Initially, pediatricians thought her strange head shape was because of her positioning in the womb or the way she was lying in her bassinet.

We sought a second opinion and connected with a different pediatrician near our home in western Massachusetts. We found Dr. Jeannette Tokarz, who’s affiliated with Baystate Medical Center. Dr. Tokarz was concerned and recommended that Maeve have a CT scan, which led to a craniosynostosis diagnosis, specifically a fusion of the left lambdoid suture, when she was 3 weeks old.

Time is of the essence with craniosynostosis. The earlier you have a diagnosis, the more options you have for treatment and we were lucky to have such an early diagnosis. We also were lucky that Baystate Medical Center had recently formed a partnership with Connecticut Children’s for pediatric neurosurgery. Dr. Tokarz referred us to Dr. Martin, and because the partnership with Baystate was so new, we made the trip to Hartford to see Dr. Martin.

After multiple meetings with us, examining Maeve, and discussing the diagnosis and treatment options, Dr. Martin performed an endoscopic strip craniectomy to treat her craniosynostosis when she was 2 months old. Dr. Martin made a small incision in Maeve’s skull and cut a strip out of the fused skull suture that was about an inch long. That little strip opens the suture and allows the skull bones to move and be shaped by therapy after surgery. This endoscopic procedure only is possible in children who are younger than about 6 months, so we were fortunate that Maeve was diagnosed early enough for this to be an option, rather than a more invasive alternative that involves opening the skull during surgery.

Given that craniosynostosis only occurs in around one in every 2,000 births, we were not concerned when we learned we were expecting our second child. However, when Rowan was born, we also saw irregularities in her head shape. We had concerns, but the doctors assured us that, in most cases, craniosynostosis isn’t a hereditary condition, and it was highly unlikely Rowan would have the same condition as her sister.

We continued to have concerns as Rowan grew, so we again consulted with Dr. Tokarz, who referred us back to Dr. Martin. He immediately recognized the symptoms and diagnosed craniosynostosis, specifically a fusion of the sagittal suture.

By this time, the partnership between Baystate and Connecticut Children’s was established, but we had such a positive experience with Dr. Martin and his team that we asked to go back to Hartford. Rowan underwent the same endoscopic surgery to correct her craniosynostosis when she was 2 and a half months old.

As part of the follow-up care from their craniosynostosis surgeries, the girls had to wear helmets. The helmets ensured that their skulls grew normally after surgery and that there would be no lasting physical effects. The helmets were created specifically for each girl. Maeve wore her helmet for about ten months, and Rowan wore hers for about eight months.

Additional follow-up care has been minimal. One month after each girl’s surgery, they completed developmental testing to ensure they were progressing well. Maeve also had another check before her third birthday and in each instance they passed with flying colors. They also have regular eye exams, to ensure they do not develop issues or symptoms.

We see Dr. Martin and his team for regular follow-up appointments, and he warns us that there’s a tiny possibility that the girls could be affected somehow down the road, but as the girls get older, it gets less likely that they’ll experience any future complications.

No words for our gratitude

As a parent, you feel helpless when your child needs surgery. Your whole purpose is to take care of them, to protect them, but there’s nothing you can do in this situation. You have to find a team of experts you can put your trust in, and that’s what we found with Dr. Martin and his team.

The nurses and coordinators we interacted with were always so kind and helpful. From the first time we met all of the neurosurgery team, they were so caring and understanding of what we were going through. It’s nerve-wracking when you think your little baby girl, whom you fought so hard to have, is going through this kind of surgery. But each of them did all they could to help keep us comfortable and informed. Even during the surgeries, they took time to update us and let us know regularly that things were going well. When you’re in the waiting room, desperate for reassurance, that small gesture is so important.

And, of course, we owe everything to Dr. Martin. His expertise is amazing. He treats our girls as if they were his, and he informed and comforted us through the entire experience. We can’t thank him enough for everything he’s done for both of our girls.  Every year during the holidays, we send a Christmas card to Dr. Martin and his team, and we always write them a brief note of thanks, but we can never fully put into words the depth of what they’ve done and how we feel about them. In a word, they are extraordinary.

We can’t imagine going anywhere else if our girls ever need serious medical care in the future. As parents, we have a duty to do what’s best for our kids, and we think the care at Connecticut Children’s is the best.

When we were in the Connecticut Children’s PICU, each girl was gifted a blanket, something to keep them cozy during their stay. It was small gesture, but it’s become a big deal for us. We use the blankets regularly, and we talk with Maeve and Rowan about their blankets and their surgeries. It’s helped us turn what could have been a difficult memory into a positive conversation with our daughters. It also shows how each small detail was thought of and made significant by Connecticut Children’s staff.

Today, the girls are growing and thriving and their scars are small and usually hidden by their hair. If you didn’t know any better, you could never tell they had surgery. We don’t talk about it often, it isn’t something that comes up regularly in conversation, so people are always shocked and surprised when they hear the girls had neurosurgery when they were so young.

Because of the excellent care Maeve and Rowan received and their continued amazing growth and development, their experiences have become memories we can talk about, rather than something we’re living with every day of our lives. That’s an amazing thing. We’re very fortunate, and we have Dr. Martin and Connecticut Children’s Medical Center to thank for that.

If you think your child may have craniosynostosis, contact our neurosurgery team for a consultation.