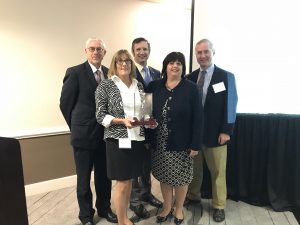 “I am honored and humbled to have been chosen as the 2017 recipient of the Safety Champion Award in recognition of my advocacy of safe teen driving in Connecticut,” said Chapman. “It is particularly meaningful to be selected for the award by some of the most ardent safety advocates in the state, including children’s hospitals, state agencies and other organizations that promote youth and traffic safety.”

Chapman lost her son in 2002 in a crash involving a teen driver. Since then, she has dedicated herself to preventing teen motor vehicle crash deaths. Through her efforts, she has been a leading advocate to improve Connecticut’s graduated driver licensing laws. She stepped aside from her role as president of !MPACT on October 1.

“This year marks 15 years since my son Ryan died as the result of a car crash. Since then, Connecticut, led largely by the Department of Motor Vehicles, brought together a diverse coalition of safety partners to address the public health risks of teen driving,” said Chapman. “We together, along with state legislators, have made significant progress in the last several years to educate and raise awareness of the risks of teen driving and address those risks through the adoption of protective laws and programs. No one person could have done it without the others. I am privileged to walk among them.”

“Sherry Chapman has been a strong and forceful leader in saving lives of teen drivers, beginning many years ago when she helped start discussions in DMV about stronger safety measures for these teens. Through her organization, !MPACT, and her own loss, she focused her energy on spreading this critical safety message. We applaud her work and all the safety awareness she has brought to thousands of young drivers across our state,” said Michael R. Bzdyra, commissioner of the Department of Motor Vehicles.

“We are thankful for Sherry’s advocacy on such an important issue as teen driver safety,” said Borrup. “Her efforts have made an immense difference in the lives of countless teenagers and families across the state.”

Dr. Pina Violano of Yale New Haven Children’s Hospital remarked, “we can’t begin to give Sherry the kind of credit she truly deserves for the reduction in teen crashes over the last ten years.”