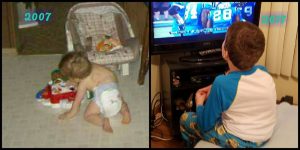 Joshua was born in 2006 with spina bifida, which led him to develop severe scoliosis by the time he was three. His previous providers had tried bracing, but he was in and out of surgery for other conditions so often that he could not wear the brace consistently.

“I immediately had a panic attack when I heard that Joshua was going to be his first official VEPTR patient but after researching him I was put way at ease,” says Joshua’s mom, Stacie. “Once the VEPTR was placed we saw immediate results. He was taller and straighter than he had ever been before. I was amazed.”

Connecticut Children’s is the only hospital in the state to offer vertical expandable prosthetic titanium rib (VEPTR), a life-changing device that helps young children with intractable spinal deformities.

Today, Joshua is 11 years old and is “doing great,” Stacie says. “He loves to read and watch movies, and play on his tablet, along with playing with his cousins. He has numerous revisions as well as a few rod replacements due to growing. Joshua has a bunch of different doctors at the hospital that we love as well, but for Dr. Thomson we have lengthenings every 6 months and see him every 3 months or longer depending.”

“I couldn’t be prouder of this hospital,” Stacie continues. “The staff is so friendly and caring to the kids and us parents. I couldn’t ask for a better hospital to treat my son. Dr. Thomson is my hero just like his other doctors that he sees, but if it wasn’t for him my son might not be here.”