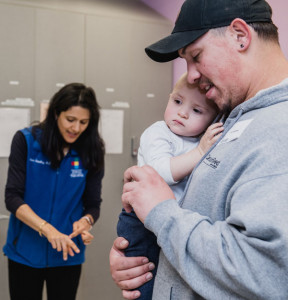 Orthopedic surgeon Dr. Sonia Chaudhry is the only pediatric hand surgeon in Connecticut and she’s here at Connecticut Children’s.

Ashley Denison remembers the worry that washed over her when doctors told her that her son had no thumb on his left hand just moments after he was delivered in April 2017. How would he hold a ball, play sports or do anything? she wondered. Would he be bullied by other kids? Would he have to be home schooled? She and her husband just wanted their son to be happy, but now they weren’t sure that would be possible.

Their dread quickly turned to hope the moment they met with Dr. Sonia Chaudhry, a pediatric orthopedic surgeon at Connecticut Children’s, in November 2017. Within minutes of meeting her, the couple knew they made the right choice. Chaudhry specializes in congenital hand anomalies and microvascular surgery and is the only pediatric hand surgeon in Connecticut. Her kind, but confident demeanor immediately put them at ease.

“I was thinking, ‘I like her,’” Ashley says of that first appointment.

Chaudhry explained the options available to correct their son Julian’s congenital condition, known as bilateral thumb hypoplasia. The couple opted for one called pollicization, which involves making a new thumb out of the index finger on his left hand. They came back in November when Julian was 19 months old to undergo the surgery.

After taking pictures of the new thumb to share with Ashley and Justin, Chaudhry wraps Julian’s hand and arm in a long cast to protect his hand and the temporary pin holding the new thumb in place. The smile on Chaudhry’s face when she came out of the operating room assured them that everything had gone well. An even bigger thrill came two weeks later when the couple watched anxiously as a Chaudhry and a medical assistant removed the cast from Julian’s arm and they saw his new thumb for the first time.

“I almost cried,” Justin said about his first glimpse of his son’s hand. “You could barely notice. Obviously, you could see a scar, but you’d really have to stare at his hand to know he has four fingers instead of five. Dr. Chaudhry did a fantastic job.”

“He’s going to be able to hold cups like this now,” said Ashley, gripping an invisible cup to demonstrate. “He plays the piano. He plays the drums. Now he can hold his drum sticks.”

Julian sleeps peacefully in his mother’s arms as she and her husband marvel at the new possibilities for their son and the amazing care they received from Dr. Chaudhry, the team in Orthopedics and everyone else they met at Connecticut Children’s.

“We were so impressed,” says Ashley. “From the nurses to the people at the front desk. Even when you’re calling they are so helpful.”

“Dr. Chaudhry made us feel like she was family,” adds Justin. “I would feel comfortable calling her about anything. Dr. Chaudhry knew what she was doing and we knew that in the first five minutes and that’s really what it’s all about; knowing you can trust someone with your child. She was always right there.”

Learn more about our Orthopedics services >