Depending on which day you ask her, 6-year-old Lily will tell you that she wants to be a ballerina or a firefighter when she grows up. But those professions require standing up straight, and until two years ago, Lily couldn’t.

She was born with a spine so severely curved to the side that it looked like the letter “C.” That kind of curvature wouldn’t just prevent a career as a ballerina, it could prevent Lily’s growth and development, as her internal organs would not have room to grow properly.

The conventional treatment for this condition involves surgery to implant an adjustable rod on the spine and then more surgeries each year to extend the length of the rod, slowly pulling the spine into an upright position, in the same way that periodic adjustment of braces straighten and move teeth. But unlike braces, each of these rod adjustments involves full back surgery with general anesthesia, significant recovery time and the risks associated with any surgery.

Fortunately for Lily’s family, they chose to bring her to Connecticut Children’s, where orthopedic surgeon Mark Lee, MD, offered the family the option of trying a new technique using something called the Magec Rod. The basic idea is the same as the conventional treatment—a rod surgically attached to Lily’s spine and periodic adjustments to its length, so it will pull her spine straight over time—but in this case, the rod contains magnets, so it can be adjusted from the outside in a simple office visit in 15 minutes with no surgery, no pain, no anesthesia, and no real recovery time.

Lily comes in, lies on a table, and the doctor moves a hand-held device over her spine. The magnets in the device pull on the magnets in the Magec Rod, and extend the length by a few millimeters. Then Lily goes home, like nothing ever happened.

In just her first year with the rod, Lily had several adjustments that pulled her spine into an almost-vertical position. And last December she had a second surgery to replace the Magec Rod, which had reached its full extension, with a longer model to accommodate Lily’s future growth. That rod should stay in place until she is 10, when it will be replaced with a third and final rod.

“Through it all,” says her father, Tony, “Lily proved to be my hero. As well as she did getting through the original surgery, she was even more brave and poised this time, because the first time, she didn’t really understand what the surgery entailed, as she was so young. For this second, most recent surgery, she knew about the pain and recovery and rehab, but she still faced it and made it through with a smile.”

Lily isn’t just a hero to her parents; she is a miracle. They always wanted children, but nature had other ideas. “I did the in-vitro thing seven times, and that didn’t pan out,” her mother, Dawn, says. “We had one miscarriage and one ectopic pregnancy, and then one more try with in-vitro. And when that didn’t work, we said, ‘That’s it; it’s just going to be us and dogs, and we’re OK with that.  We’ll just live our lives. It’s in God’s hands, and if it’s meant to be, it’s meant to be.’”

And that is how they were living their lives. Then, one New Year’s Eve, they were sitting at home when the phone rang. It was Tony’s cousin calling to say that her daughter was pregnant and would not be able to raise the baby. She wondered if Tony and Dawn wanted to adopt the baby when it was born. “I’ll never forget that call,” Tony says. “We had looked into adopting in the usual way, but there’s so much involved with that. But with this situation, everything was happening just the way it should happen. Everything came together with very little intervention from us. Lily literally fell into our lives.” 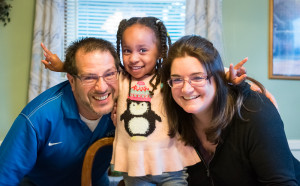 To look at Lily today, you can barely tell that she has any kind of physical problem. She runs, jumps and embraces life with all the enthusiasm of any 6-year-old. If anything, she is brighter and more lively than most.

“She has tons of stuffed animals,” Tony says, “and she treats them as her very own children. She tucks them in at night (all 15-20 of them) and kisses them awake every morning. She is going to be an amazing parent someday.”

She’s also enjoying being in Connecticut Children’s television commercial and ad campaign, which launched in May 2019. “She was genuinely excited to be able to have a chance to inspire and encourage other kids who might have medical issues that they must deal with every day, just like her,” Tony says. “She absolutely loved the entire experience.”