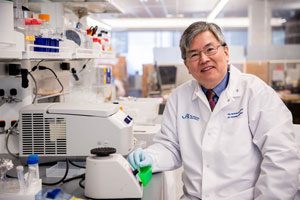 Distinguished oncologist and cancer researcher Ching C. Lau, MD, PhD, division head of our Center for Cancer and Blood Disorders, was recently published in Nature, the international journal of science. Dr. Lau’s research investigates the genomic landscape of childhood cancers and the genetic alterations that may give rise to childhood cancer.

Connecticut Children’s physicians recently co-authored an important study about a newly described inflammatory syndrome appearing in children across the nation 2-4 weeks after a COVID-19 infection or exposure. The syndrome has since been named multi-system inflammatory syndrome in children or MIS-C. There is now concern the number of these cases may rise given the latest spikes in infection rates in states in across the country.

Thanks to an extraordinarily generous seven-figure gift from the Mandell-Braunstein family, the Center for Digestive Diseases at Connecticut Children’s Medical Center has established The Mandell-Braunstein Family Endowed Chair for Pediatric Inflammatory Bowel Disease. The gift will allow the Center for Pediatric Inflammatory Bowel Disease at Connecticut Children’s to expand both its research and clinical treatment efforts, which have already earned the Gastroenterology Division a designation as one of the best in the nation from U.S. News and World Report.

Using a patient’s personal genetic makeup, a team of medical researchers led by a Connecticut Children’s gastroenterologist has discovered a new way to predict if a child newly diagnosed with Crohn’s disease will require major surgery within 3 to 5 years.

A $500,000 gift from the Reid R. Sacco Adolescent and Young Adult (AYA) Cancer Alliance will help Connecticut Children’s Medical Center expand the availability of clinical trials to adolescents and young adults with cancer, a patient population that has not seen as many therapeutic advances in cancer treatment over the past 30 years as compared with younger and older patient populations. The new gift brings the Alliance’s total giving to Connecticut Children’s to $1 million in memory of Gene and Lorraine Saccos’ son, Reid, who died in 2005 at the age of 20, following a two-year battle with sarcoma.