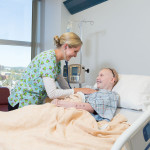 When Genevieve was 10 years old, her parents had no idea that a routine doctor’s visit would lead to a cancer diagnosis. Or that she would begin her summer vacation the very next day as an inpatient at Connecticut Children’s. Genevieve had acute lymphoblastic leukemia (ALL), a cancer of the blood and bone marrow that occurs when abnormal cells in a part of the body begin to grow out of control. After a month of inpatient treatment and approximately three months after diagnosis, Genevieve’s cancer went into remission, and for the last two years she’s continued chemotherapy to keep it that way. Read Genevieve’s story > 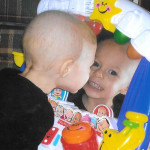 When Madisen was almost 2 years old, she told her mother she had a “boo-boo.” Little did her mother know, the “boo-boo” was actually a tumor the size of a grapefruit—engulfing her kidney. Madisen was diagnosed with a clear-cell sarcoma of the kidney, an extremely rare type of kidney cancer comprising about 3 percent of all pediatric renal tumors. Today, Madisen is a healthy, happy middle-schooler who is excited about trying out for drama and the softball team this fall. Read Madisen’s story > 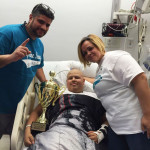 Armani suffered a football injury and was treated for a break that would not seem to heal. After a PET scan, CAT scan, x-rays and MRI, Armani and his family learned the definitive diagnosis: he had osteosarcoma. Osteosarcoma is the most common malignant bone tumorand it most frequently shows up in adolescence, being more common in boys. Fortunately, if the tumor is found early and has not metastasized, as was the case with Armani, the prognosis is very hopeful. Read Armani’s story > 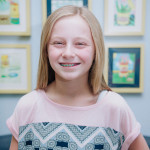 Charlotte is a sweet, soft-spoken girl with a big heart and an even bigger message for children diagnosed with cancer: “Don’t be scared and never give up!” As a cancer survivor, 11-year-old Charlotte speaks from experience and truly “walks the walk.” And, as the inspiration behind a growing fundraising phenomenon known as “PJ Day for the Kids,” the Coventry middle school student has been inspiring people from across the state to support children battling cancer and blood disorders at Connecticut Children’s. Read Charlotte’s story > 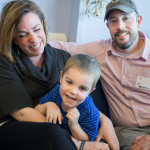 When Gavin was two years old, he had what was thought to be an ear infection, until his face started swelling. Four days later, after the swelling kept getting worse, the pediatrician ran a battery of tests and called at 7:30 the next morning. “He said, ‘Your son has leukemia, and you need to take him to the emergency room right away,’” his mother Lindsay recalls. Two days after being diagnosed, surgeons put in a port-a-cath (a device inserted under the skin and into a vein) so that his doctors could more safely deliver chemotherapy and get blood samples. He was declared in complete remission in May 2017, but he will continue chemotherapy until 2020. Read Gavin’s story > 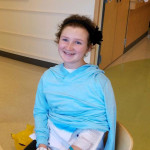 It was the last week of first grade in 2011, and Morgan went to bed with an earache. “I thought it was just that she was worn out,” says her mother, Kathy. “But when she woke up she was throwing up to the point of passing out. We called 911, and fortunately the medics that arrived recognized some of the other symptoms that she had and said it looked neurological. So they took her straight to Connecticut Children’s.” Morgan was diagnosed with a rare form of cancer called glioblastoma. “Morgan is a heroine who has battled through a pair of surgeries, radiation and chemotherapies,” says neurosurgeon Paul Kanev, MD. “She has remained a cherished and optimistic child, and her outcome is a celebration of the collaboration of each team member caring for her and the support of her wonderful family.” Read Morgan’s story >

For more information about the Center for Cancer and Blood Disorders, or to schedule a virtual or in-person appointment, please call: