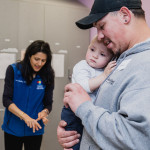 Julian was born with a condition called bilateral thumb hypoplasia. When he was 19 months old, he came to Connecticut Children’s to undergo a procedure called pollicization, which involves making a new thumb out of the index finger on his left hand. The surgery was performed by Connecticut’s only pediatric hand surgeon, Sonia Chaudhry, MD. “You’d really have to stare at his hand to know he has four fingers instead of five,” says Julian’s father, Justin. “Dr. Chaudhry did a fantastic job.” Read Julian’s story >

When Lily was born, her spine was curved almost into the shape of the letter “C.” She had severe scoliosis, and there was concern it would interfere with her internal organs as she grew.  Lily is being treated with  the MAGEC Rod, which uses magnets to adjust the rod externally, reducing the need for surgeries. Read Lily’s story >

For more information about orthopedics, or to schedule a virtual or in-person appointment, please call: