Diana and Jarrod Perry remember sitting in the neonatal intensive care unit (NICU) at Connecticut Children’s, hearing that their newborn daughter needed open-heart surgery – and that her condition was so unique, specialists from the Divisions of Cardiac Surgery, Cardiology, Neonatology, General Surgery, Orthopedics and Plastic Surgery were working together to create a whole new playbook.

“As parents, we were terrified,” says Diana. “We didn’t know what to say or do.”

But our pediatric cardiac surgeons did. 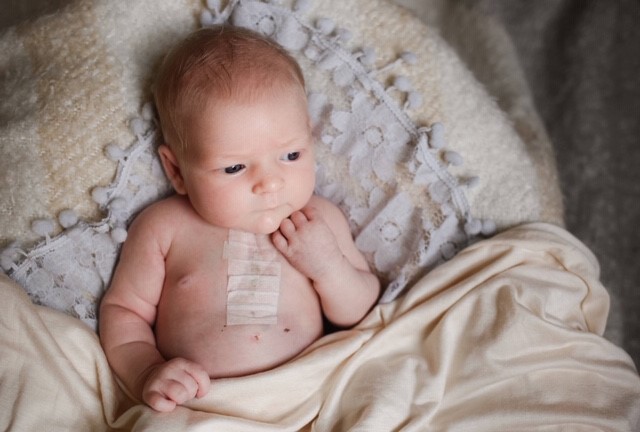 Delilah Perry was born in June. Right in the middle of her chest, in a spot about the size of a quarter, you could see her heart beating right through her skin. She’d been born without a sternum, the chest bone that usually sits right above the heart. She was rushed to Connecticut Children’s Neonatal Intensive Care Unit (NICU), where tests showed that in every other way she was healthy. But to protect her heart and her lungs, she needed surgery. Her diagnosis was quite uncommon, with few case reports in the medical literature – so her doctors had to figure out the best treatment strategy.

A multidisciplinary team approach was used to plan out Delilah’s case. They took their time, and reached out to peers all over the country. And they made sure to include Jarrod and Diana in their process.

“We didn’t even have to ask any questions – they gave us all the information they had, as soon as they had it,” says Diana. “It made us feel safer that they were so honest and transparent. We really felt held as a family.”

“The time and people to make the right decision”

A few days later, our cardiac surgeons closed the gap where Delilah’s sternum should be. As Jarrod and Diana followed along on the EASE app, the team opened Delilah’s chest, brought the edges of her ribs together and connected them with absorbable sutures. After a short stay in the pediatric ICU for three days after surgery, she was able to go home.

The timing of the procedure was key: Because Delilah was just 5 days old, her tissues were naturally elastic, which helped prevent extra pressure on her heart and avoided the need for any prosthetic material to close the gap. Her body’s natural healing process will essentially grow a new sternum where her ribs meet. Thanks to that decision, her road to recovery is straightforward. Delilah’s pediatrician will keep a close eye on her sternum as she grows, but in all likelihood, she won’t need any special follow-up or care long-term.

And so, to Diana and Jarrod’s astonishment, it’s almost as if the whirlwind of Delilah’s first week never happened. At home in Cromwell, she is happy and healthy, and getting acquainted with her 4-year-old brother, Jack – who, after some initial skepticism, now loves holding her.

“It’s wild. When she was born, it was obviously very serious. You’re thinking, ‘Is this going to end well?’” says Diana. “But because Connecticut Children’s took the time and all the people to make the right decision, the remarkable thing is that Delilah might just get to be a typical kiddo. She couldn’t have been in a better place.”