When she was 12 years old, Lindsay Fritz wrote a letter to her future self. “Don’t worry, you got this,” she wrote. “You are bent, not broken.”

The year before, a routine physical had revealed a curve in her spine, and she’d been referred to Connecticut Children’s for X-rays. The diagnosis: adolescent idiopathic scoliosis.

On the verge of her teenage years – a time when it’s tough enough to feel different, and to accept the body you’re given – it was an unexpected blow.

“I know you will get angry, sad, frustrated and tired of this,” she wrote to her future self. “Remember your family, friends and doctors… Someone will be there for you.”

Now 14 years old, Lindsay’s journey with scoliosis continues. And she wants to help other kids on theirs.

If unchecked in a growing body, scoliosis can advance as much as one degree per month, eventually causing pain and impairing breathing. If it becomes severe enough, it requires major surgery.

But Lindsay was diagnosed early, and given a careful treatment plan by Connecticut Children’s orthopedic specialists, led by Jeffrey Thomson, MD. At the most extreme, her curve was 34 degrees; another 10 to 15 degrees, and she would’ve been a candidate for surgery. But Dr. Thomson and the Connecticut Children’s team have been able to control Lindsay’s scoliosis with a series of custom back braces and a special regimen of physical therapy. (Connecticut Children’s physical therapists are among a limited number of specialists in the nation certified in the Schroth Method, research-supported exercises for managing scoliosis.) 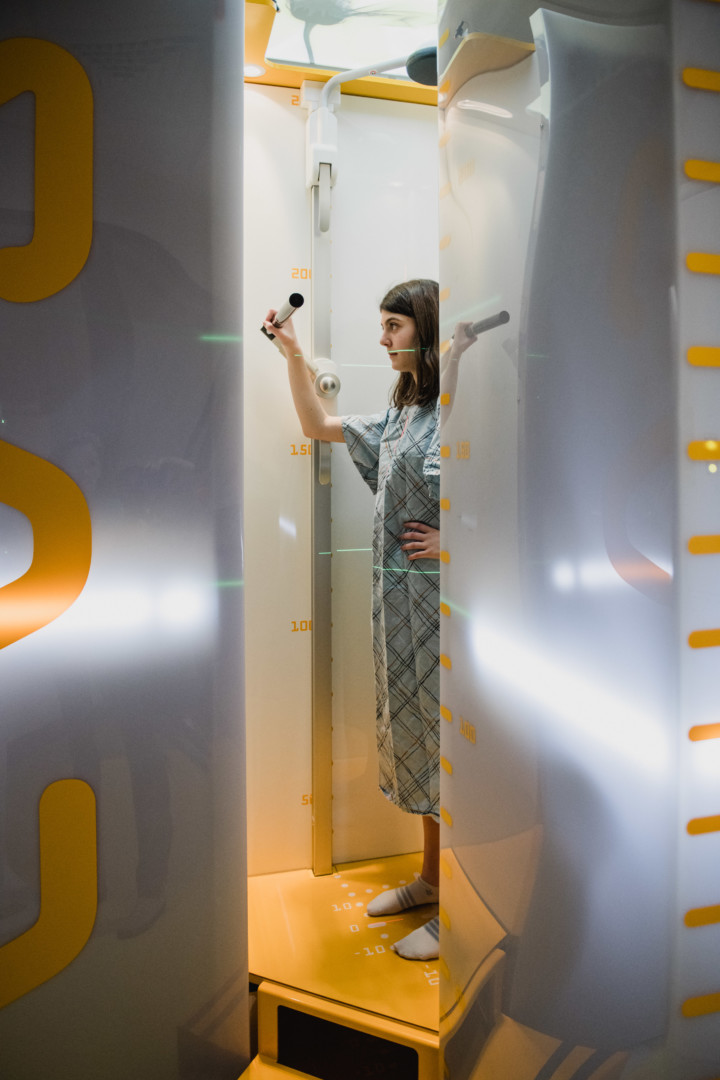 This all requires keeping a close eye on Lindsay’s spine, with X-rays at least every six months. With traditional X-rays, that could amount to a lot of radiation exposure. That’s why Connecticut Children’s uses a state-of-the-art EOS X-ray machine: It emits significantly less radiation than most X-rays, and produces high quality scans and 3D models of large parts of the body. For patients, the experience is better too. Having an EOS scan is more like being in a photo booth than a piece of medical equipment. They can stand upright, and their medical team is in communication with them the whole time.

As a result, families drive from all over New England and New York to use Connecticut Children’s EOS machine, which is the only one in the state. For Lindsay’s family, it was right around the corner. The timing was lucky too: Connecticut Children’s acquired the machine in late 2018, and Lindsay was the first patient to use it.

“I love it,” says Lindsay. “It’s a really cool piece of technology.” Her parents, Jennifer and Todd, were thrilled.

“As a parent you always get nervous about radiation exposure,” says Jennifer. “Knowing that Lindsay was going to be subject to at least two X-rays a year for a series of years, we were all really excited to use a machine with such a limited radiation dose.”

“It’s quick, the kids love it, and we get very high-quality images with very low radiation,” says Dr. Thomson. “It’s been wonderful.”

Lindsay’s parents encourage her to think of scoliosis as just one piece of who she is, rather than something that defines her. “You fit the condition into your life, not your life into the condition,” says Jennifer.

Lindsay has taken that advice and run with it – or rather, danced with it. With Dr. Thomson’s blessing, she dances competitively in lyrical, pointe ballet, jazz, tap and musical theater, with dance classes five nights a week. Every Wednesday, she teaches a tap and jazz class to a group of awestruck seven- and eight-year-olds. Meanwhile, she’s getting straight As in the ninth grade.

She makes it look easy, but amid all the demands and pressures of a busy teenager, that’s not always the case. At slumber parties, she’s the only one in a back brace. Physical therapy and X-rays and fittings take time away from homework and dance and friends. Every time she gets a new brace, there’s an inevitable adjustment phase, with nights tossing and turning trying to get comfortable enough to fall asleep while encased in hard plastic.

But she usually finds a way to bring herself around: to keep the brace on; follow the treatment plan; stay positive.

She returns, again and again, to the progress she’s making. Once she’s done growing in a few years, her curve should hold steady on its own, no bracing required. “I’m know I’m headed in a good direction,” she says. She’s grateful for what this experience has taught her about herself and her own resolve. She’s handled it all, says mom Jennifer, with maturity and grace.

Her team at Connecticut Children’s has noticed.

“Lindsay’s very positive and very interested in what’s going on,” says Dr. Thomson. “She takes an active role in her health. She’s a great role model.”

That’s just what Lindsay aims to be: a role model. As her own journey with scoliosis continues, she is driven by the thought of other teens beginning theirs.

She’s interested in a career as a pediatric orthotist, the medical specialist who makes and fits braces and splints. “I think going through this as a kid will really help me relate to my patients,” she says. (Her inspiration is her own orthotist at Connecticut Children’s, Megan Chamis.)

She’s a member of the support network Curvy Girls, which connects support groups for teens with scoliosis. There are local meetings throughout the year, and an annual conference with attendees from all over the world. Last year, she raised money that made it possible for a young women from Africa and her mother to attend the annual conference in New York. Eventually, she hopes to be a chapter leader.

It was at the Curvy Girls 2018 conference that Lindsay wrote the letter to her future self. In it, she reminded herself that she has family, friends and doctors to turn to every time she feels frustrated or tired. She vowed to be someone who offers the same support to others.

“Be aware of other girls just like you,” she wrote. “Stop and talk to them and help them.”

Lindsay’s advice for youth with scoliosis