Milagros knew in her heart that her daughter was sick. But for a long time, no one else seemed to believe her.

Jazz, age 3, had been plagued with mysterious symptoms for months. She’d been spitting up for no reason, and waking with bad headaches. Milagros brought her to doctors all over Massachusetts, but no one found anything.

It wasn’t. When Jazz’s tests came back normal, Milagros felt desperation creeping in. “I looked at Dr. Singhal and said, ‘Please don’t tell me she’s good and send us on our way like everyone else,’” she remembers.

This time, that’s not what happened.

Want to learn more about our Center for Cancer & Blood Disorders?

Dr. Singhal suspected Jazz’s symptoms might be from pressure on the brain – and she knew how to find out for sure. Since Connecticut Children’s is an integrated health system, patients have instant access to more than 30 pediatric specialties. Dr. Singhal tapped into that network to help Jazz get a brain MRI, a test that other hospitals and Jazz’s local pediatrician had refused to run.

It showed a buildup of fluid in Jazz’s brain, and a cancerous tumor the size of a plum.

“Had I believed those other doctors, Jazz wouldn’t be here today,” says Milagros. “Dr. Singhal heard me, saw my desperation, filtered through to find out what was wrong. She saved Jazz.”

Jazz is adopted. She came into Milagros’ life as a result of a different health crisis: Several years ago, Milagros was struck with an autoimmune condition that affects nerves and muscles. For almost a year, she was blind and paralyzed. At several points, doctors were sure she wouldn’t survive. When she pulled through, and regained her full health, she and her four biological children made a decision: They would open their home, and their family, to kids in need.

“I was left for a reason,” says Milagros. “That’s when we started fostering.” She fostered Jazz from birth, and formally adopted her last July. A few months after that, Connecticut Children’s discovered the tumor in Jazz’s brain.

Milagros says Jazz has “three angels”: The first is the family’s long-time doctor, Paul Salva, MD, who referred Jazz to Connecticut Children’s and continues to play a big role in her life. The second is Dr. Singhal.

“Dr. Martin could almost sense how I was doing,” says Milagros. “If I had a million questions, he was never rushing to leave the room. He would give me the truth, and make sure I understood. That was very important to me.”

Days after Jazz’s MRI, Dr. Martin successfully removed the tumor from her brain. With such a sensitive surgery, there was a chance Jazz might struggle to walk or talk again. Within hours, she astonished everyone by sitting up and asking for a chair.

“She made sure everyone saw her doing it the same day,” Milagros says. “She’s feisty.”

> Related: Through the Storm: Keilany’s Story 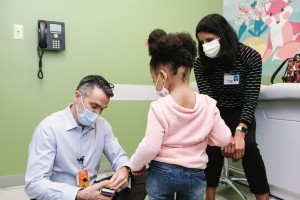 Jazz spent almost a month recovering at Connecticut Children’s, first in the pediatric intensive care unit (PICU), then on the MS8 inpatient floor. She had round-the-clock care from the Pediatric Hospital Medicine team, specializing in the unique needs of a hospitalized child and their family. “Everyone was amazing,” Milagros says. “They kept Jazz’s spirits up, and offered me that extra support. I never felt alone.”

Jazz also had the support of her adoptive family. Her oldest sibling, age 23, drove in with hot chocolate and sausages every morning. The 18-year-old stayed by her bedside, along with Milagros. The other two, ages 14 and 16, held down the fort at home with Gramma. Her adoptive aunts and uncle helped with home-cooked meals and anything else the family needed. When Jazz left Connecticut Children’s, and went to Massachusetts General Hospital for proton radiation therapy, all four siblings (plus the family dog) came with her and Milagros, thanks to temporary housing provided by the nonprofit Christopher’s Haven.

“My children are my heroes,” says Milagros. “We’re a team. We do it all together.”

Jazz now follows up with Eileen Gillan, MD, in Connecticut Children’s Center for Cancer & Blood Disorders. She’ll meet with our medical genetics experts soon, to see if she has genetic markers for other types of cancer. If she ever needs access to clinical trials, she can find more than 100 currently ongoing right here. If she ever needs the latest genomics research, she’ll be plugged in thanks to a partnership with world leader The Jackson Laboratory. As she grows, she’ll receive Connecticut Children’s specialized support and resources for pediatric cancer survivors.

Jazz’s family has a nickname for her: “Pequeña Guerrera,” or “Little Warrior.” When she was born, she had to fight for her life. Then, in her third year – dealing with months of illness, followed by brain surgery and radiation – she had to battle for her life again. Through it all, she keeps bouncing back to her fierce, cheerful self. She’s always humming and dancing. She’s obsessed with the song “Old Town Road,” and serenades her siblings with it every chance she gets. When it comes to doctor’s appointments, Milagros often gets the sense that Jazz is reassuring her. While preparing for her last MRI, Jazz said reassuringly, “No more boo boos, Mom, they’re all gone.” She was right – the MRI came back clear. The tumor is completely gone, and there is no sign of cancer.

Lately, she’s been insisting on returning to dance class. After the past six months, Milagros can’t help but feel protective. But she also knows that her youngest daughter won’t let anything get in her way.

“She’s strong and determined,” says Milagros. “Little Warrior, that’s what she is to us. A miracle.”