To solve a life-threatening heart defect, Ellis Schwartz-Mosca’s care team at Connecticut Children’s had to think big – by thinking small.

On Oct. 27, Connecticut Children’s pediatric cardiac surgeons successfully implanted the world’s tiniest mechanical heart valve into Ellis’ heart. He was just 2 months old, and weighed only 7 pounds 9 ounces. Until recently, this outcome was beyond imagination for such a small baby at Connecticut Children’s. 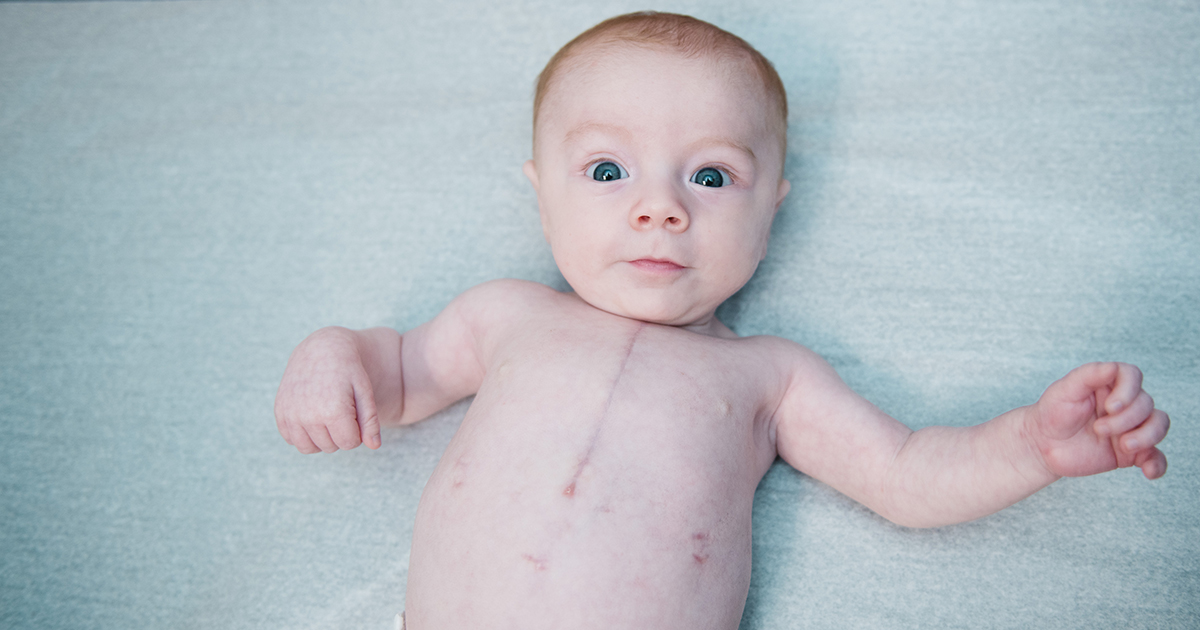 The biggest team for the smallest patients

Alyse was 20 weeks pregnant when a routine anatomy scan first showed a problem in Ellis’ heart. Her Hartford HealthCare team sent her and husband Mike to the baby experts at Connecticut Children’s.

Connecticut Children’s fetal cardiology team used advanced cardiac imaging to look at Ellis’ heart in utero. What they found was extremely serious: a condition called critical aortic stenosis, and that parts of the left side of Ellis’ heart were too small. To survive, Ellis would need intensive care from the moment he was born, and a heart procedure within a few days.

“Everyone was incredible,” says Alyse. “They were on top of everything.”

When Ellis was born in late August, everybody – mom, dad, and experts from both health systems – were ready. 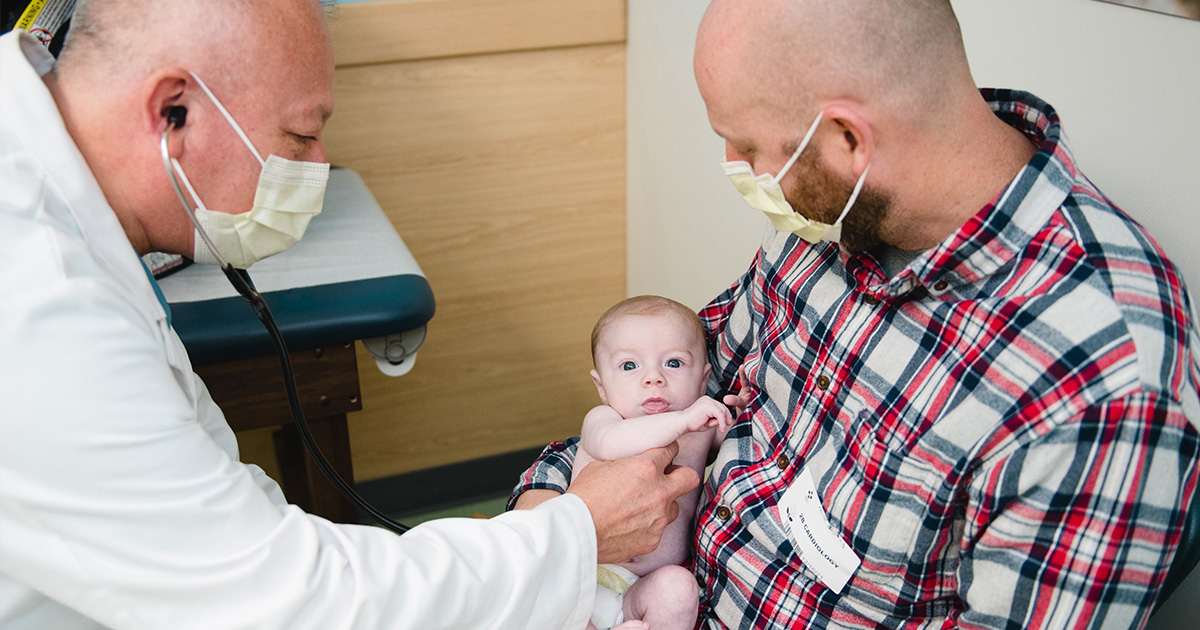 “It’s incredible what they can do”

Three days after Ellis was born, Connecticut Children’s cardiac catheterization team performed a procedure to help Ellis’ heart function better, giving him time to grow bigger before any future open-heart surgery. Using a long, thin tube called a catheter, director of Interventional Pediatric Cardiology Cesar Igor Mesia, MD, and Caitlin Heyden, DO, placed a tiny balloon in Ellis’ aortic valve and inflated it, opening the valve to allow more blood to flow through it to Ellis’ brain and body.

“It’s pretty incredible what they can do,” says Alyse. Using the EASE app, she and Mike were following along every step of the way, grateful for regular updates throughout the complex procedure. “It was a scary day. This is our child’s heart,” she says. It helped knowing whose hands he was in.

“We trusted the staff and the doctors,” says Mike. “We knew how well they were taking care of him.”

The surgery was a success – a major achievement for little Ellis. But he had one more heart problem to overcome before he could thrive. And because he was still so small, this one would require a solution that, just a few years ago, didn’t exist. 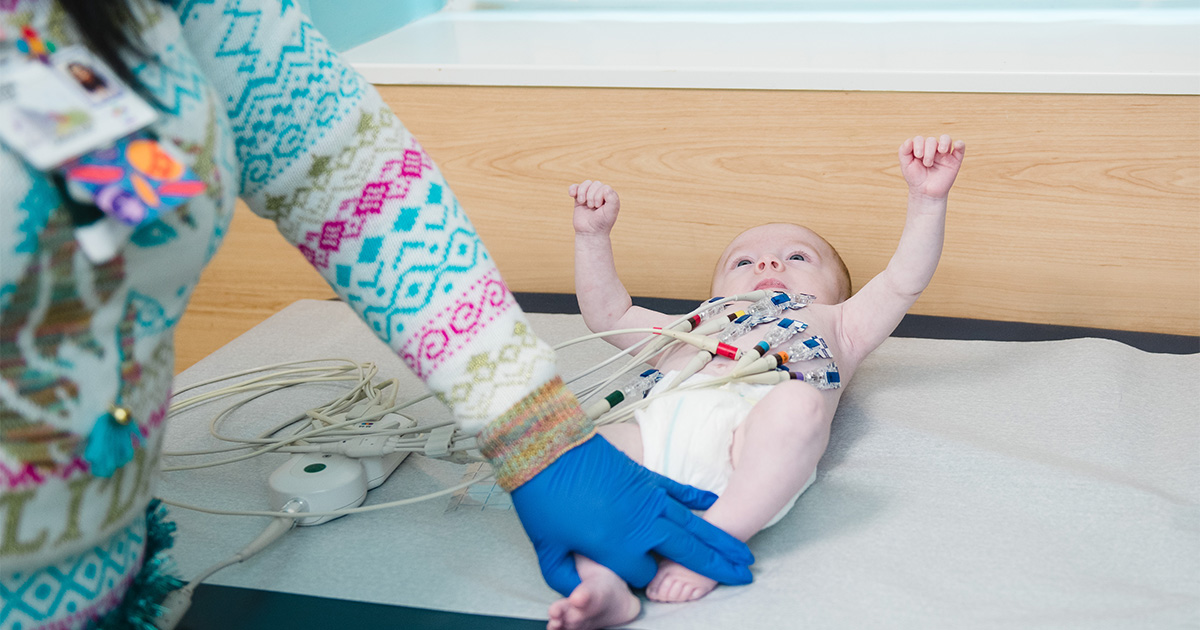 Because the left side of Ellis’ heart was underdeveloped, his mitral valve was too small. With his other heart issues repaired, his care team waited, and watched, to see if that valve would function well enough on its own. Unfortunately, it didn’t. Ellis still needed a ventilator to breathe, and he wasn’t gaining weight.

Connecticut Children’s doctors gathered with Alyse and Mike, and told them about a tiny device that could make a big difference. They could replace Ellis’ abnormal valve, they explained, with a mechanical one – the smallest model available, created especially for newborns and infants. At 15 millimeters wide, it’s only about the size of a dime. But it’s creating a whole new world of possibilities for patients like Ellis.

“This is an example of the highest complexity of patients we care for at Connecticut Children’s, and are able to successfully perform cardiac surgeries on,” says Dr. Mello.

When Ellis was 2 months old, he had his second open-heart surgery. Dr. Mello successfully replaced his mitral valve with the smallest pediatric mechanical heart valve in the world.

“I can’t imagine not having good people to go through this with,” says Alyse. “We’re so grateful that, just 20 minutes away, we have the greatest children’s hospital.”

These days the family, who lives in Cromwell, follows up regularly with Dr. Mesia, including weekly phone check-ins and regular MyChart messaging.

But all of that is down the road. As for today? Ellis is 4 months old, willful and bright, the picture of health. He’s proof that, even for babies born with serious heart problems, the chance to thrive is no longer beyond imagination.

No surprise: He also seems to be a natural trailblazer.

“He’s doing amazing. He’s chatty all the time,” says Alyse. “We found out very quickly that he’s in charge.”