From the time he was an infant to the year he turned 21, John Hoffman could mark the months by visits with Jeffrey Hyams, MD.

Dr. Hyams, an internationally-recognized researcher who heads Connecticut Children’s Division of Gastroenterology and the Center for Digestive Diseases, Hepatology and Nutrition, helped guide John’s care through the liver transplants that saved his life – twice. He led the treatment plan that allowed John to grow up with sports and sleepovers and a fairly normal childhood. He drew so much blood from John’s arm over the years, John and his parents nicknamed the vein on the inside of John’s right elbow “Hyams’ Vein.” 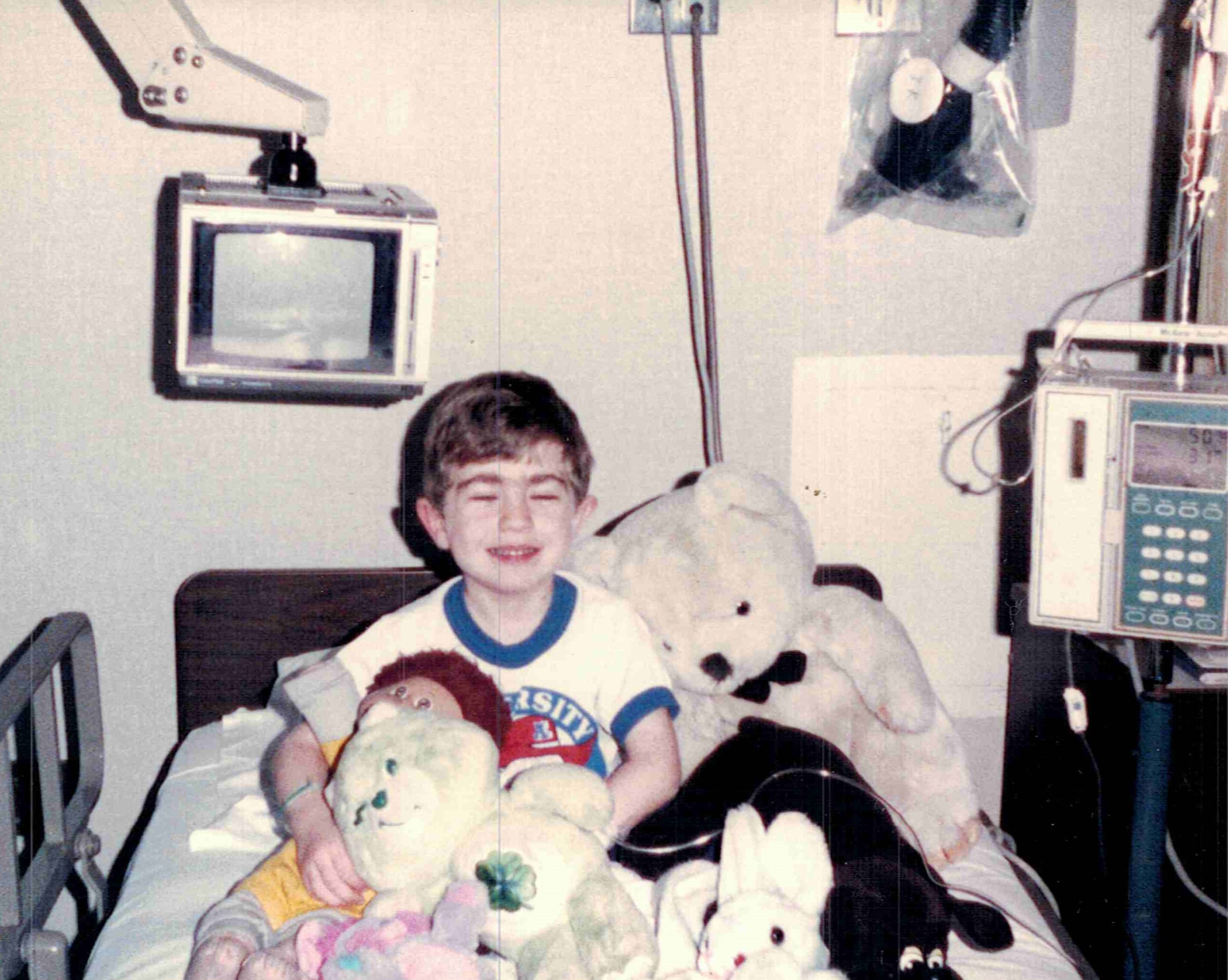 So about two years ago, when John got a call about a technology job at the state’s only dedicated pediatric health system, he thought immediately of Dr. Hyams. He thought of all the clinicians who’d helped him grow up. He thought of the team who supported his parents through their hardest decisions.

On the phone, he asked the recruiter, “Are you talking about Connecticut Children’s? I can absolutely tell you why I should work there.”

“I hadn’t even had an interview yet,” John remembers, “but from that point on, I couldn’t imagine working anywhere else.”

When he got the job, he texted Dr. Hyams the good news.

“Connecticut Children’s was always behind us”

When Dr. Hyams and John first met, Dr. Hyams was just out of his fellowship training and John had just been born – he was only 2 or 3 months old. Dr. Hyams diagnosed John with biliary atresia, a liver disorder that is always fatal without surgery or a transplant. 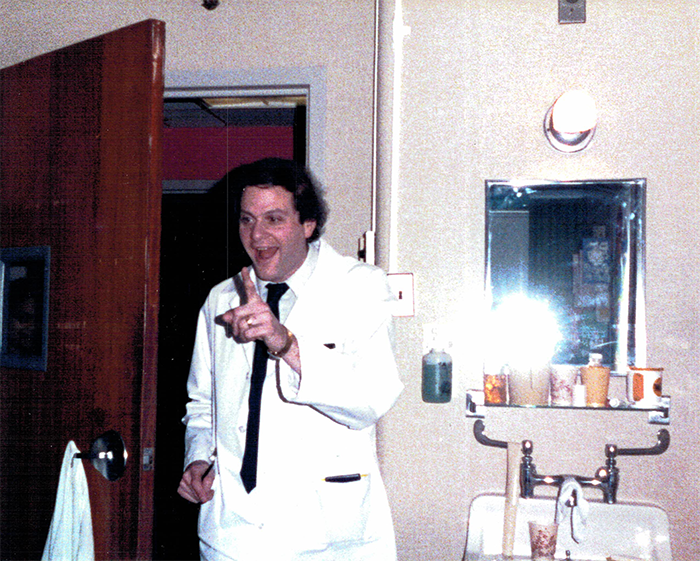 “That was around the time liver transplantation was just becoming art and science,” says Dr. Hyams. He and his team worked closely with the Pittsburgh physician then pioneering the procedure, and at 13 months old, John became one of the tiniest patients ever to undergo a successful liver transplant.

It saved John’s life, but his health challenges were far from over. Over the next decade and a half, Dr. Hyams and his team saw John every few weeks, carefully monitoring his blood levels and liver biopsies. They watched John grow up, and became close friends with his parents. The nurses made him gifts, and took turns watching him. If John’s liver numbers spiked, it was Dr. Hyams who sent him to the hospital, and managed his care to get things back on track.

And when John was 16, it was Dr. Hyams who delivered the news: He needed a second liver transplant. The family put John’s name back on the transplant list – and for the next nine months, they all carried beepers and waited.

“Truly, this was life or death every step along the way,” says Dr. Hyams.

> Related: Need specialty care for your child? Find a Connecticut Children’s location near you

On that difficult journey, John’s family never felt alone. “Connecticut Children’s was always behind us,” says John. “They were always there, anytime we had a question. They always gave us peace of mind.”

Finally in July, in the middle of the night, the beepers went off. John, who was at a sleepover with his cousins, went home and woke his mom. With their bags packed and the sun just starting to rise, family friends came by to wish them luck.

“That was when it all caught up with me – the gravity of the situation. I was really scared,” says John. “But we had to go.”

“I’m where I’m supposed to be”

Since that second transplant, John’s health has been strong. His visits with Dr. Hyams finally ended when he turned 21. A few years later, Dr. Hyams attended John’s wedding – “one of the great, unbelievable pleasures of my life,” says Dr. Hyams.

John and wife Karen went on to have three children, now ages 3, 6 and 9. And John went on to build a career in technology – which eventually, through that fateful phone call in November 2018, brought him right back to Connecticut Children’s. 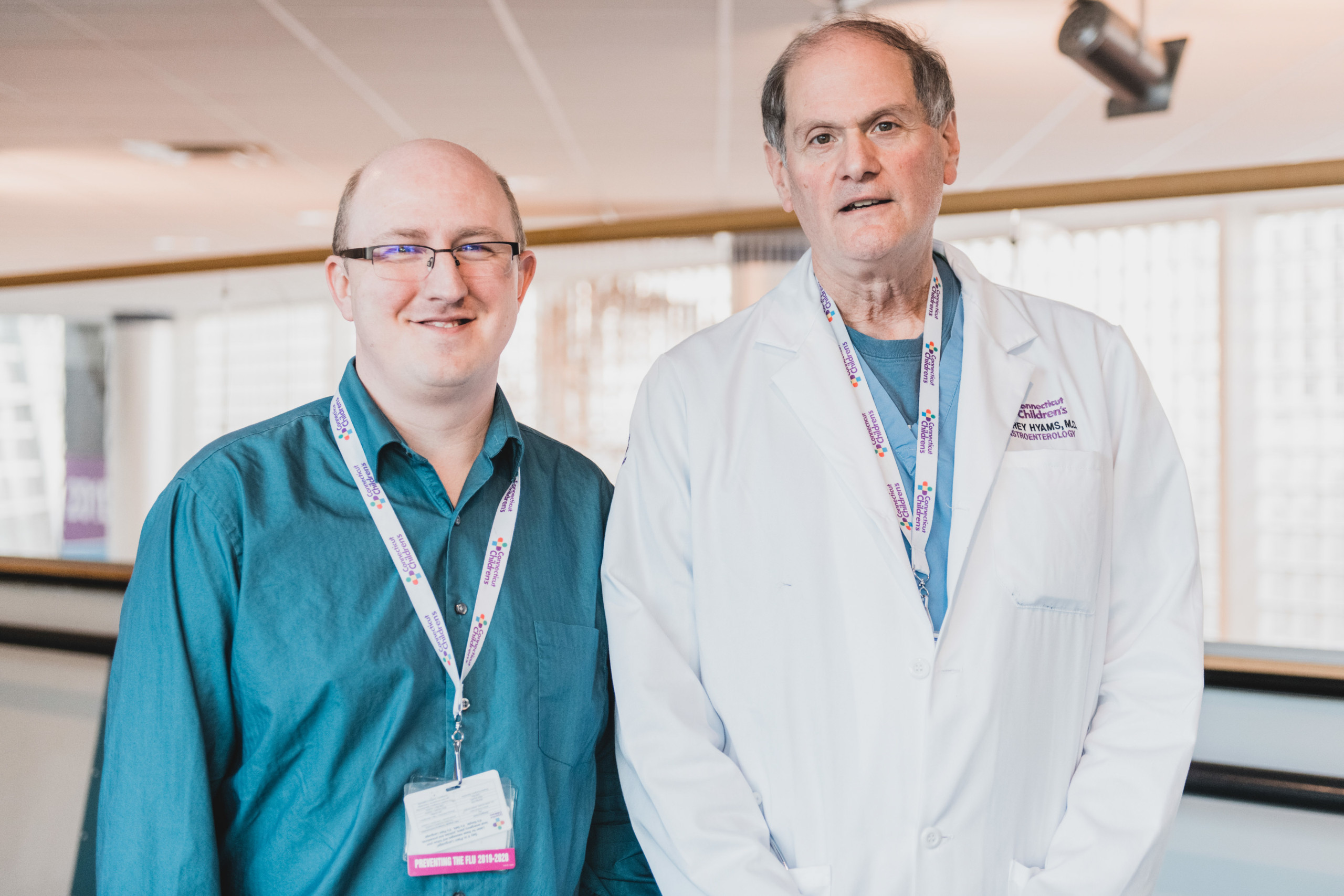 When John started his job in the Information Systems Engineering department, building and updating servers, his first assignment was for Connecticut Children’s Division of Gastroenterology– the division that Dr. Hyams leads.

“You can’t make this up!” says Dr. Hyams. “It has been a remarkable story, an intergalactic confluence of events. It’s overwhelming.”

When John was younger, he didn’t tell many people about his health situation. But this new chapter at Connecticut Children’s has helped him embrace it. He’s working on a memoir, and has started a blog, johnstransplantjourney.com, to document his experiences.

“I want patients to know that there’s somebody around who can identify with what they’re going through,” he says. “I want them to know there’s hope.”

In the meantime, his work at Connecticut Children’s has connected him to a deeper sense of purpose.

“I’ve come full circle. I’m where I’m supposed to be,” John says. “I love that every project and every step of the way, I’m helping Connecticut Children’s care for kids.”