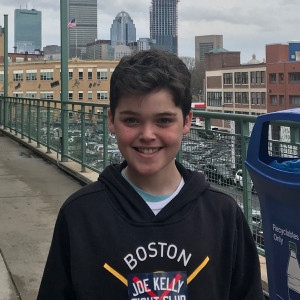 On the outside, my son, Patrick, appears to be a typical 12-year-old boy. He likes hanging out with his friends. He’s a good student. He’s in the ski club at his middle school, and he’s excited to start playing baseball in the spring. He loves video games, robotics and technology.

What makes Patrick amazing is that he does all this with cystic fibrosis (CF), a genetic disorder that produces thick mucus in his body that affects his respiratory and digestive systems.

CF is a difficult condition for any family to deal with. Through it all, we’ve depended on the incredible care we’ve received at Connecticut Children’s Medical Center. The doctors and staff members give Patrick and our family the support we need to cope with his disease.

My husband, Kevin, and I first got the inkling that something might be wrong during my first ultrasound while I was pregnant with Patrick. The ultrasound showed Patrick had an echogenic bowel, which is a bowel that appears very bright on the ultrasound, as bone would look. The doctor’s office called us after that appointment and said it could be a sign of the placenta bleeding and Patrick having swallowed the blood, or it could be a sign of a genetic anomaly.

We went through genetic counseling and decided we wanted to have an amniocentesis done to see what specific mutation Patrick had. There are more than 1,000 possible mutations for CF. It turned out Patrick had the homozygous DeltaF508 mutation, the most common disease-causing mutation in the CFTR gene, the gene that causes CF.

I was a nurse before Patrick was born, so I knew a little about CF. Mostly, what I knew was that patients didn’t have pleasant outcomes, and it was a complicated process. It’s a real shock as a parent to know your child has this disease. You can’t really prepare for something like that.

Answers from a trusted friend

As it happens, I’ve been friends with Melanie Sue Collins, MD for more than 40 years. We grew up together and lived a couple of houses down from one another as kids. My mom happened to go to a birthday party for Dr. Collins’ mom, and Dr. Collins was there. My mom was chatting with Dr. Collins and mentioned our situation with Patrick, and Dr. Collins told my mom to have me call her.

We met with the entire CCCFC team a week before Patrick was born, and we discussed the care he’d receive, how often we’d see them, his basic treatment plan and other important details. I learned that CF research and treatments have come a long way from the information I had read in my nursing books. Patients with CF are able to live full, productive lives despite their disease. Having the support of the pulmonary team and being able to walk through every step was a huge help for us.

When Patrick is well, he comes into the pulmonary division for a checkup every two months. When he’s sick, those appointments happen every month or more often as needed. Patrick has regular pulmonary function tests that evaluate his lung volume and capacity, as well as the rates of air flow into and out of his lungs. Patrick sees either Dr. Collins or Craig Lapin, MD during his visits, and these tests help the doctors determine the course of his treatment.

Patrick sees nutritionist Lisa Devine as part of his care at CCCFC. CF patients require a high-calorie, high-fat, high-sodium diet, and the nutritionist ensures Patrick is getting the calories he needs to stay healthy. Patrick also has a gastrostomy tube (G-tube), which we had placed when he was 9, to help him get the number of calories he needs. When patients with CF are sick, they’re supposed to triple or even quadruple the number of calories they take in because they lose calories so quickly when they’re ill, but Patrick just couldn’t keep up, and he was losing too much weight. I think the G-tube is the best decision we’ve made for Patrick’s care. It’s one fewer stressor he has to deal with.

Patrick regularly takes more than 20 medications each day, and he receives three respiratory treatments every day. It takes two and a half hours to administer his treatments every day, and that’s when he’s well. When he’s sick, his respiratory treatments are four to five times per day, which means three and a half to four hours of treatment time. On top of this, Patrick regularly uses a machine called an intrapulmonary percussive ventilator, or IPV, to help break up mucus in his chest. Unfortunately, Patrick requires too much medical attention for me to continue working as a nurse, but I often tell people I’m still a nurse — I just have one patient, and I don’t get paid anymore.

In addition to his CF, Patrick has asthma and tracheobronchomalacia, which means his trachea and bronchi (windpipe) aren’t as rigid as they should be and can collapse more easily. And, on top of his pulmonary conditions, Patrick sees different specialists at Connecticut Children’s for other conditions. The specialists he has seen include:

That requires a lot of coordination to make sure Patrick’s doctors are on the same page. I’m sure it’s a challenge on the part of the CCCFC team, but they make it look easy.

At school, Patrick carries inhalers to manage his asthma and pulmonary issues. I sometimes bring his nebulizer to school and perform chest physiotherapy during the day. He also carries pancreatic enzymes to help him break down the food he eats and absorb nutrients. He sometimes forgets to take them, but he’s learning.

For the most part, Patrick just goes with the flow when it comes to his care. When he was young, he didn’t know he was any different than the other kids. But when he was in third grade or so, he started noticing that the other kids didn’t have to take medicine before they ate or do breathing treatments.

Even so, he’s been quiet about his CF. Not a lot of people at school have known about his condition. It wasn’t until middle school that he started to open up to his close friends about his disease. In language arts class, the students were asked to write about adversity that they’ve faced in life, and Patrick wrote about his CF and the care that’s involved.

Patrick used to be very self-conscious about his G-tube. When he would swim, he used to cover the tube with a shirt so no one could see. But this past summer, when his older sister, Mollie, had her friends over to go swimming, Patrick didn’t wear the shirt while he swam for the first time. I think he’s becoming more comfortable with the tube and with letting people know about his condition.

We all have our roles to play in Patrick’s care, and they’re all important. For example, I’m Patrick’s primary medical caregiver at home. I’ve always been a planner, a list-maker, someone who always thinks of the future. But with Patrick’s CF, I’ve learned not to think too far ahead. It’s better for Patrick if I can try to stay in the present and do what I can to build a strong foundation for him day by day.

Kevin, Patrick’s dad, works full-time, and health insurance is especially critical when you have a child with a chronic disease. Kevin copes with Patrick’s condition by fundraising for CF research. He organizes the Last Saturday in July golf tournament each year, which raises money for the Connecticut chapter of the Cystic Fibrosis Foundation. Our family members and friends help with the tournament as well.

My mom helps us tremendously. She watches over Mollie when Patrick is in the hospital, and she supervises Patrick’s medical regimen if Kevin and I are away. She’s a huge source of support.

But I think Mollie may have the most important role as Patrick’s sister. She helps Patrick feel “normal.” She treats him just as any big sister does an annoying kid brother, and she gives him a hard time, but she’s always the first one to defend him when he needs it.

… And his second family too

The pulmonary team at Connecticut Children’s has been like a second family to Patrick and all of us since before Patrick was born. They’ve been with us for almost 13 years now, and they are always there for us. Whenever Patrick is admitted to the hospital, R.B. Curtis, the CCCFC Pediatric Care Coordinator, stops in to check on him, as does his social worker, Deana Phillips.

Everyone in the department works well with Patrick and really cares about him. They probably know him almost as well as we do. They help us feel like we have some control over Patrick’s CF, even though it’s tough to know how it’s going to progress. Whenever we have problems, questions or concerns, we know we have the resources to help us.

I’ve referred other families to Connecticut Children’s and the CCCFC. I tell them they absolutely can trust their children to this team. They focus on the well-being of the whole child, rather than just treating the disease or condition. They aim to make their patients and families comfortable. They’re willing to go above and beyond to create positive experiences at times that might not otherwise feel so positive.

The most important member of Patrick’s care team: himself

Patrick’s probably the bravest person I’ve ever known. He’s never known a life without medications, respiratory treatments, blood draws, X-rays and operations. He’s had his ups and downs, but through it all, he’s maintained a positive attitude, a great sense of humor and incredible compassion for others.

Every day, it seems like there’s something new Patrick does or says that surprises me. He had a wish fulfilled by the Make-A-Wish Foundation last summer, and he wanted to visit the Googleplex, Google’s corporate campus in San Francisco. We spent five days out there, and he was incredible throughout the whole trip.

Patrick is an amazing person. I’m so proud to be his mom. And I’m grateful for the extraordinary care Patrick receives each time we walk through the doors at Connecticut Children’s.

For more information about how we can help if your child has CF, contact our pulmonary medicine team.