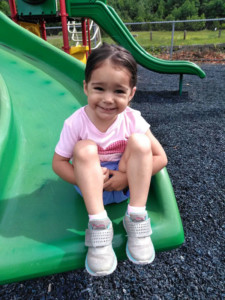 When you’ve got three brothers, you learn to hold your own. That’s how it is for 3-year-old Maddison. When she’s not pulling goofy faces at the baby, Nolan, she’s tagging along with her older brothers — Jaxon, age 11, and Brayden, age 8 — when they play basketball and soccer, or she’s scaling a jungle gym, or tearing around on her bike. She is always ready for a dance party. “Could be at the mall, could be at a restaurant, literally anywhere she hears music, she just starts to dance,” says mom Erin.

The outgoing, playful attitude has always been part of Maddison’s personality. But the jungle gym, the bike and the exuberant dancing are new.

“From last spring till now, she’s a different girl,” says Erin. “Before, she always played cautiously and carefully. She wouldn’t try things like basketball or soccer. Dancing was just swaying her hips back and forth. Now she’s twirling, jumping, using every inch of the room. She’s jumping! It’s like I have a whole different child.”

The transformation started last spring, when Erin and Maddison’s dad, Patrick, brought Maddison to the pediatrician for a swollen knee. They assumed she’d twisted it while playing in the yard, then discovered that it wasn’t a simple injury after all. Pediatrician Marc Cerrone, MD, referred Maddison to Connecticut Children’s. After X-rays and bloodwork, Connecticut Children’s Rheumatology division, led by Barbara Edelheit, MD, diagnosed Maddison with polyarticular juvenile idiopathic arthritis.

Erin and Patrick were stunned. “Honestly, we never suspected,” she says. “I’d never heard of any kids with arthritis.”

She’s not alone. Arthritis is much more commonly associated with adults — but in fact, nearly 300,000 children in the U.S. have some form of it, along with the joint pain, stiffness and swelling that can accompany flare-ups. Maddison’s type, juvenile idiopathic arthritis, is the most common for children under age 16. There’s no certain cause (idiopathic means “of unknown origin”), but researchers continue to improve how it’s managed.

“Not many doctors do that”

Dr. Edelheit is among these researchers, as well as directly working with patients. She started seeing Maddison every few months, and immediately connected with her — and with her brothers, since Maddison’s appointments are sometimes a family affair.

“Dr. Edelheit is wonderful. When I have the whole troupe with me, she talks to all of them, and makes them all feel important,” says Erin. As for herself, “I knew nothing about arthritis or how we were going to plan this out. Dr. Edelheit answers all my silly questions and takes them all seriously. In my experience, not many doctors do that.”

Dr. Edelheit started Maddison on three medications plus a multivitamin, and monitored her closely. Nine months later, Maddison’s in medicated remission – which means she feels great. Her medication is down to just one prescription and a multivitamin.

“I am so happy Maddison has Dr. Edelheit to treat her and help her through this stage of life,” says Erin. “I have never met a doctor so understanding and caring of both Maddison’s needs and my concerns as a parent.”

“You can’t stop her”

Before this medical journey began, Maddison never complained of discomfort. Erin assumed that she was just a careful, cautious child, and not particularly interested in athletics. But after her diagnosis and nine months of treatment, she’s fearless.

“Before she was treated, she wouldn’t do half the stuff she does now. Today she’s climbing playgrounds with no fear, jumping around outside, and even crawling on the ground on her knees,” says Erin. “It may sound silly, but these are big accomplishments. It makes me so happy to see her acting like every other child her age, being active and trying new things.”

“Maddison goes for anything now,” she says. “You can’t stop her.”