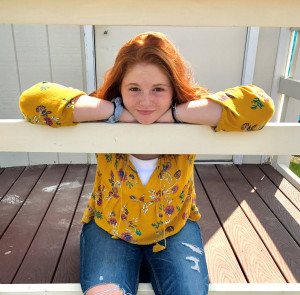 I can’t imagine having a better daughter than my little girl, Rylie. She’s 16 and a sophomore at Hall High School in West Hartford, Connecticut. Rylie’s an honor-roll student and plays on the school tennis team, among other activities.

I know the teenage years often involve drama, but Rylie understands better than most that there are more important things to be concerned with. That’s because Rylie was diagnosed with acute lymphoblastic leukemia (ALL) when she was 6. ALL is the most common form of childhood cancer, accounting for about 20% of all cancers diagnosed in people younger than 20.

While I’d never wish for any other family to go through what we endured with Rylie’s diagnosis and treatment, the bright side is that we didn’t have to face our challenges alone. We had amazing support from our community and the team at Connecticut Children’s Center for Cancer & Blood Disorders. Their care and comfort helped us persevere even through the toughest times, and Rylie has come through as happy and healthy as I ever could have hoped.

Growing up, Rylie was a healthy and active child. She never really had to go to the doctor for anything, and I rarely had any concerns about her. Even when Rylie was a little girl, I could take her hiking on Talcott Mountain with no problems. So it concerned me when Rylie had trouble keeping up during a fundraising walk at our local reservoir. Even though she wasn’t quite 6 yet, I knew that was a walk she normally would have completed easily.

Later, I learned that Rylie had gone to the school nurse a few times for pain in her legs, and the nurse said it probably was just growing pains and not to worry too much about it. Then there was about a week where I had to wake Rylie up for kindergarten, which was very unusual. She normally loved school, but that week, she said she was tired and didn’t want to go. At that point, she hadn’t missed a day of class all year.

When I called Rylie’s pediatrician’s office, the nurse said they should see Rylie, so I brought her in. The doctor said Rylie should have some bloodwork. The test results showed Rylie was anemic, so the pediatrician put her on vitamin D and recommended that we monitor Rylie over a few months. One month later, Rylie’s test results were better, so I felt relieved.

I later found there are several instances in which a patient with leukemia can have false-negative test results, and this was one of them. Luckily, the pediatrician said we should test Rylie one more time just to be safe. I brought her into the office on a Monday for her blood test. The next day, the pediatrician’s office called to say they needed to see us that evening. I tried to put it off — Rylie had swimming lessons, I said, and I wasn’t sure we could make it. But the receptionist told me, “We need you to make it.”

That startled me. I brought Rylie in, and the pediatrician told me that it wasn’t clear what was going on with Rylie, but it could be some sort of blood disorder or leukemia. Then he said, “I don’t want you to freak out. I’ve made an appointment with a great doctor I know personally over at Connecticut Children’s.” He said we were meeting with Arnold Altman, MD, the next day at 9 a.m.

When we arrived at Connecticut Children’s that Wednesday morning, the staff directed us to the hematology and oncology clinic. The team there pretty much had Rylie’s diagnosis of ALL as soon as we walked in the office.

I called my mom and boyfriend and told them that I needed them to meet us at the hospital. They came, and we didn’t leave Connecticut Children’s for almost three weeks after that. 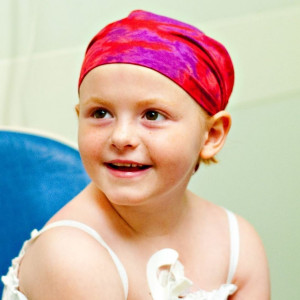 The Connecticut Children’s team put in Rylie’s implanted port for medications the day after her diagnosis and started her chemotherapy the day after that. After that first three-week stretch, Rylie’s treatment involved many visits to Connecticut Children’s, both inpatient and outpatient, for her chemotherapy and other cancer treatments. Even when Rylie wasn’t actually in the hospital, we were still going three to four times per week for her many treatments.

The whole process took about two and a half years, but the first year and a half was the most rigorous and intensive for Rylie. Through it all, though, she was a rock. Rylie never complained about her therapy or how she felt. When she lost all her hair, she didn’t even want a wig. “Why would I want a wig?” she asked. “Who cares? So I don’t have hair. It’ll grow back someday.”

Rylie’s perseverance and positive attitude made the treatment process bearable for all of us, even when she was getting spinal taps every week, going to chemotherapy all the time and taking mountains of medications at home. There were times when it was obvious Rylie didn’t feel well, but she still tried to be positive. She would make up songs about rubbing her feet or bringing her Gatorade during treatment to help pass the time and make me smile.

After the first year and a half, the next year of Rylie’s treatment was the maintenance phase. We only needed to go to the hospital once a month for her checkups, and she could go back to school, although she did miss a week every month because of her medication regimen.

Rylie explained to all her friends that her blood was sick, but it was going to get better, and she had a team of great doctors and nurses who took care of her and made her treatment fun. She told them about the clowns and dogs she got to see at Connecticut Children’s, as well as how she got to do art projects and become a master at air hockey during her visits.

We got incredible care from everyone at Connecticut Children’s during Rylie’s treatment. Dr. Altman, Rylie’s doctor, was the head of the department at the time. He let us know about how survival rates for patients with ALL had improved so much because of the findings from the latest clinical trials and the new treatments researchers had discovered.

Dr. Altman is retired now, and Rylie mostly sees Eileen Gillan, MD, during her regular checkups. Rylie and I are involved with the Cycle of Life, a celebration of survivors of pediatric cancer, and we met Dr. Gillan through that program. Rylie has also seen Kerry Moss, MD, who works with the REACH for the STARS Survivorship Program. REACH (research, education, advocacy, and continued life and health) for the STARS (survivors tackling all roadblocks successfully) provides guidance, specialized care and support to survivors of childhood cancer to help them make smart life choices based on what they’ve gone through and what their bodies have undergone during treatment.

Everyone at Connecticut Children’s was there for us in every way possible during Rylie’s care. Melissa Goddard, Rylie’s primary nurse, was such a source of support for us and still is, even after she left the hospital and moved to Florida with her family. In the beginning, Rylie was nervous about having her implanted port accessed, and Melissa worked with her to come up with a plan for how they would do it together. She even gave Rylie tubes and other pieces to use on her doll, which had a port of its own. Melissa always knew what it took to help Rylie feel comfortable and at ease.

Of course, Melissa wasn’t the only team member we leaned on during Rylie’s treatment. Barb Cohen, another nurse, is awesome. She was the nurse Rylie always requested on days Melissa was off. And there were nights when we’d rush Rylie to the emergency department at Connecticut Children’s because she had a fever, and we weren’t sure if she was having a reaction to her medications. Every time we walked in those doors, we knew we were in good hands and that we’d be taken care of. It was a safe place for us.

The staff members anticipate both their patients’ needs and the parents’ needs, and they do a great job taking care of everybody. I can’t tell you how many times Rylie would be asleep in her hospital bed at night, and one of her nurses would come in and say, “I know how Rylie’s doing, but how are you doing? What can I help you with?” Not only did they do a great job caring for my little girl, but they also helped me cope with everything that was going on. I’m very grateful for that.

A source of strength and support 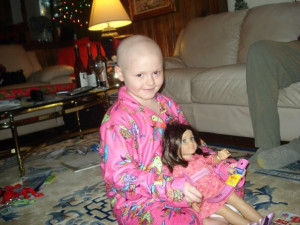 Rylie has taken the lessons she learned during her treatment and applied them in her work for cancer patients and survivors like her. In addition to the Cycle of Life I mentioned before, Rylie is involved in our local Relay For Life, which raises money for the American Cancer Society. Even as I write this, Rylie is preparing for a mother-daughter tea to raise money for her school’s Relay For Life club. She worked with her school’s ceramics department to make mugs to be auctioned off at the tea.

Rylie also has helped organize fundraisers for the Hematology/Oncology Fund at Connecticut Children’s, such as PJ Day for the Kids at her high school. Rylie teamed up with Nick Wesoloskie, who created PJ Day in honor of his sister, Charlotte, to bring the event to her school. Today, West Hartford is one of the state’s top fundraising towns for this event.

Rylie’s talking about potentially going into nursing, physical therapy or psychology as a way of continuing to help people and give back. I don’t know if Rylie would have turned out this strong or compassionate if she’d never had ALL. But she knows she was very lucky, and she’s driven to do anything she can to help ease the journey for other kids who are on the path she has traveled. She’s the strongest, most dedicated 16-year-old I know.

I know there are other families out there who are going through what we went through, worrying about what to do because their child has cancer and they don’t know what the next step is. If you’re in that situation, you should know you’re not alone.

You are in the best hands possible if you have the team at Connecticut Children’s on your side. You’re in for a fight, but I don’t think there’s a better group of doctors or nurses anywhere. They’re just the best. If you were putting together a dream team of caring, educated people to help your child take on their cancer, this is the team you would want. No matter what happens, they will be there for you.

Contact our Center for Cancer and Blood Disorders team to learn how we can help if your child has acute lymphoblastic leukemia or another form of cancer.