Charlotte Wesoloskie is a sweet, soft-spoken girl with a big heart and an even bigger message for children diagnosed with cancer:

“Don’t be scared and never give up!”

As a cancer survivor, 11-year-old Charlotte speaks from experience and truly “walks the walk.” And, as the inspiration behind a growing fundraising phenomenon known as PJ Day for the Kids, the Coventry middle school student has been inspiring people from across the state to support children battling cancer and blood disorders at Connecticut Children’s Medical Center.

What started out as a family grassroots fundraiser – raising $500 in its inaugural year and nearly $198,000 in the past year – benefits patient care, research and family assistance programs at Connecticut Children’s Center for Cancer & Blood Disorders.

“I like that it helps others kids,” said Charlotte, who, at 21 days of age, was diagnosed with rhabdomyosarcoma, a rare but aggressive type of cancer that forms in soft tissue, often in the arms, legs, chest or abdomen. She has been cancer free for the past 10 years. 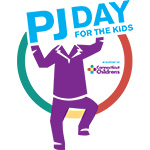 Proposed in 2011 by Charlotte’s older brother, Nick, PJ Day has been a way for the family to give back and – with the help of countless others who wear PJs to work or school one day a year for a dollar donation or more – support the world-class care that Connecticut Children’s provides for children with cancer.

“You just never know,” said Charlotte’s mother, Tara Wesoloskie, RN, a perioperative nurse at Connecticut Children’s who chairs the annual event, now entering its eighth year. “We never saw this cancer diagnosis coming. One day you’re taking care of patients; the next day you are on the other side of the bed.”

Charlotte, who is the youngest of three children, has never known life before cancer or PJ Day.

In May 2007, three weeks after Charlotte was born, Tara discovered a lump in her newborn’s ribcage during a late-night feeding. “It was a lump that was growing exponentially,” she said. “It grew to be the size of a baked potato.”

Tara and her husband, Cory, took Charlotte to Connecticut Children’s for evaluation, where they were introduced to Michael Isakoff, MD, a nationally renowned sarcoma expert. Sarcomas are cancers that develop from connective tissues in the body, such as muscles, fat, bones, the linings of joints, or blood vessels.

Charlotte, who weighed just 8 pounds at the time, was diagnosed with rhabdomyosarcoma (RMS), a type of sarcoma made up of cells that normally develop into skeletal muscles, the muscles used to move parts of the body. The cancerous mass measured 6 cm x 9 cm.

According to the National Cancer Institute, rhabdomyosarcoma makes up only 3.5 percent of cases of cancer in children 0-14 years of age, with only 350 cases seen across the country per year.

“Each year, we see approximately three to four children at Connecticut Children’s diagnosed with rhabdomyosarcoma,” said Dr. Isakoff, who serves as Clinical Director of the Center for Cancer & Blood Disorders. “Charlotte’s situation was especially rare; she was a young infant and her tumor was growing very rapidly.”

In the year that followed, Charlotte underwent multiple rounds of chemotherapy and six surgeries in which four ribs and soft tissue were removed from her right side.

“It was really a challenging year for her,” Tara said. “We worried about how she could be okay after all of this.”

Upon meeting Charlotte today, you would never know she had once battled cancer. Although she still comes to Connecticut Children’s for annual checkups at the Center for Cancer & Blood Disorders, she is not on any medications and is as active as the next sixth-grader.

“It’s amazing what she can do today,” Nick said.

Charlotte is a fast-pitch softball player, a Hula-Hoop enthusiast and an honor roll student, who loves to ride bikes and swim and has career aspirations of being a surgeon. In addition to actively raising funds and awareness about pediatric cancer through PJ Day, she has also participated in a number of other activities to benefit patient care at Connecticut Children’s, including HuskyTHON, Radiothon, Cycle of Life, Concorso Ferrari & Friends, Jamie’s Run, and the ribbon-cutting ceremony at Lyman’s Orchard Sunflower Maze.

Through it all, Charlotte loves spending time with her brother Nick, who is now 14 and entering high school, and her sister, Caroline, who is 12 and in the 7th grade.

“We’re so lucky to have her,” Caroline said.

And, of course, Charlotte will be helping her family and friends plan for the 8th Annual PJ Day, which became an official state day of awareness in 2017 with legislation naming the second Friday of each December as “PJ Day.” Each year, Charlotte and her best friend, Madisen Yanez, who is a fellow-cancer survivor and attends the same school, choose matching PJs for PJ Day, which this year will be Friday, December 14.

“PJ Day is so much larger than our family now,” Tara said. “It has grown so far beyond that. For us as a family, there has been closure. PJ Day gives people a chance to rally around other kids with cancer at Connecticut Children’s.”

PJ Day for the Kids

Connecticut Children’s experts from many specialties work together to provide our pediatric patients specialized care from diagnosis, to treatment through follow-up. Our cutting-edge therapies, extensive family education and support services encourage independence and a high quality of life. PJ Day for the Kids is one of many signature events at Connecticut Children’s that supports our efforts to help children grow healthy.

Interested in spending a day in your PJs? It’s for the kids, of course! Charlotte and Madisen would love for you to join them on December 13, 2019.