Upon entering a room, here are some things that 3-year-old Vondel is likely to do: take off his shoes, start running laps and pause only to coax a smile out of whoever’s in range. He’s a trickster, say parents Jade and Douglas, and a natural comedian.

The Cardiology and Pediatric Intensive Care Unit (PICU) teams at Connecticut Children’s can attest to that. Last spring, three days after open-heart surgery, Vondel padded out into the middle of the PICU floor. When his Cardiology team saw him and asked if he wanted to go home, Vondel’s pitch-perfect response made everyone burst out laughing. “Yeah,” he chirped, as if it the answer were obvious. In fact, it was the moment Jade and Doug had been wishing for since Vondel’s birth.

“They helped him recover even faster”

When Vondel was in utero, Jade’s doctors detected a heart murmur. When he was born, they confirmed an atrioventricular (AV) canal defect: a hole in the wall separating the upper chambers of his heart, along with a leakage from one of his heart valves. He would need open-heart surgery, but not until he was big enough. For the first two years of his life, Jade and Douglas brought him regularly to Connecticut Children’s to monitor his heart, and waited, and worried. 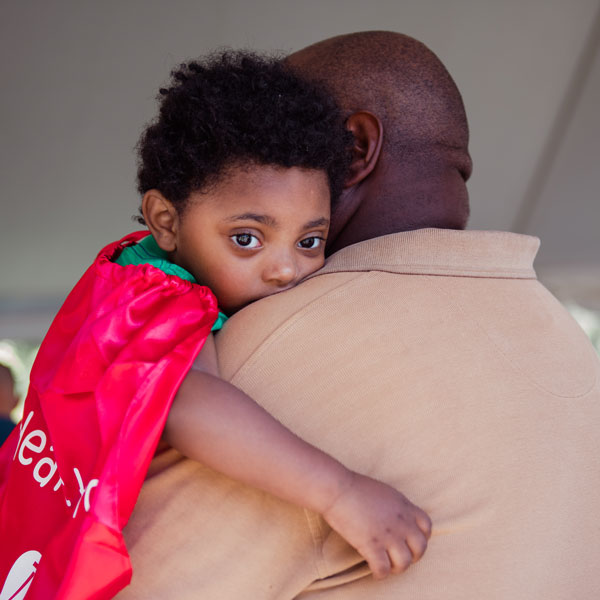 “That cloud was lingering over us for two and a half years,” says Jade.

The surgery to patch Vondel’s AV canal and repair the heart valve took just under three hours, and was a success. The next day, Vondel was already trying to get out of his hospital bed and walk. On the fourth day, he sauntered out to the PICU hallway and told the team he wanted to go home – about five days ahead of schedule.

He’s always been strong-willed, say Jade and Douglas, and perhaps that’s partly why he bounced back so quickly. But they’re also convinced that the team surrounding him had a lot to do with it.

“The comfort they gave him helped him recover even faster,” says Doug. He and Jade were touched by how compassionate everyone was, making sure Vondel was taken care of in every moment, bringing by a therapy dog and giving him toys and a blanket. Every time there was a shift change, the outgoing staff brought their replacement by to introduce Jade and Doug in person.

“They made sure we were comfortable too,” says Jade.

“We’re so grateful we did the surgery here,” says Doug. “They did a wonderful job.”

During his time in Connecticut Children’s PICU, Vondel “captivated a lot of hearts,” says Jade. While he’ll probably check in with a cardiologist for the rest of his life, his follow-up appointments now are just every six months, and his daily life is the picture of health.

He’s a bundle of energy, always ready to race around whatever room he’s in: the apartment, the library, the waiting room before bloodwork. He’s compassionate, rushing to offer comfort if he sees another child who’s upset. He’s also back to being a trickster, jumping on sofas and making a beeline to switch off the lights when nobody’s looking.

When he was undergoing surgery, Jade remembers thinking, I need you to be my pain in the butt again, because that’s how I’ll know my little boy’s good. Eleven months later? “He’s good,” she laughs.

“We are eternally grateful to Connecticut Children’s,” she says. “The cloud’s been lifted.”