Newborns often have temporary pimples or blotches that disappear soon after they are born. It’s also quite common to see birthmarks on their skin at birth or shortly after. Birthmarks range from hardly noticeable to disfiguring, but no matter how large or small they are, they can be upsetting.

Birthmarks can be flat or raised, have regular or irregular borders, and have different shades of coloring from brown, tan, black, or pale blue to pink, red, or purple.

They’re mostly harmless and many even go away on their own or shrink over time. Sometimes birthmarks are associated with other health problems, though, so talk to your doctor about whether this might be the case for your child.

Birthmarks can’t be prevented and they’re not caused by anything done or not done during pregnancy. There’s no truth to old wives’ tales about “stains” being caused by something the mother did or ate. The cause of most birthmarks is unknown. They can be inherited, but usually are not. They are typically not related to trauma to the skin during childbirth.

There are two main types of birthmarks, which have different causes. Vascular (blood vessel) birthmarks happen when blood vessels don’t form correctly — either there are too many of them or they’re wider than usual. Pigmented birthmarks are caused by an overgrowth of the cells that create pigment (color) in skin.

The most common vascular birthmarks are macular stains, hemangiomas, and port-wine stains:

Macular stains. Also called salmon patches, angel kisses, or stork bites, these faint red marks are the most common type of vascular birthmark. They’re often on the forehead or eyelids, the back of the neck, or on the nose, upper lip, or on the back of the head. They may be more noticeable when the baby cries. Most often they fade on their own by the time a child is 1 to 2 years old, although some last into adulthood. 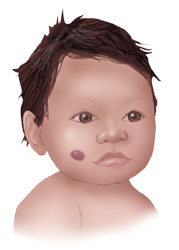 Hemangiomas. Hemangiomas are classified as superficial when they appear on the surface of the skin (“strawberry marks”) and deep when found deeper below the skin’s surface. They can be slightly raised and bright red and sometimes aren’t visible until a few days or weeks after a baby is born. Deep hemangiomas may be bluish because they involve blood vessels in deeper layers of the skin.

Hemangiomas grow rapidly during the first 6 months or so of life, but usually shrink back and disappear by the time a child is 5 to 10 years old. Some, particularly larger ones, may leave a scar as they regress that can be corrected by minor plastic surgery. Most are on the head or neck, although they can be anywhere on the body, and can cause problems if their location interferes with sight, feeding, breathing, or other body functions.

Port-wine stains. These are discolorations that look like wine was spilled on an area of the body, most often on the face, neck, arms, or legs. Port-wine stains can be any size, but grow only as the child grows. They tend to darken over time and can thicken and feel like pebbles in midlife adulthood unless treated. They never go away on their own. Ones near the eye must be assessed for possible problems involving the eye.

The most common pigmented birthmarks are café-au-lait spots, Mongolian spots, and moles:

Café-au-lait spots. These very common spots are the color of coffee with milk, which explains the name. They can be anywhere on the body and sometimes increase in number as a child gets older. One alone is not a problem. However, it’s wise to have your child checked if there are six or more spots that are larger than a pencil eraser (for a younger child), or larger than a dime (for an older child). Many café-au-lait spots can be a sign of neurofibromatosis (a genetic disorder that causes abnormal cell growth of nerve tissues).

Mongolian spots. These flat, bluish-gray patches are often found on the lower back or buttocks. They are most common on darker skin, such as on children of Asian, American Indian, African, Hispanic, and Southern European descent. They usually fade — often completely — by school age without treatment.

Moles (congenital nevi, hairy nevus). Mole is a general term for brown nevi (one is called a “nevus”). Most people get moles at some point in life. One present at birth is called a congenital nevus and will last a lifetime. Large or giant congenital nevi are more likely to develop into skin cancer (melanoma) later in life, although risk is low in both. Smaller congenital nevi may have a slight increase in risk. Moles can be tan, brown, or black; flat or raised; and may have hair growing out of them.

When to Call the Doctor

A doctor should check a birthmark when it first appears to determine its type and what kind of monitoring and treatment it needs, if any. Call the doctor if a birthmark ever bleeds, hurts, itches, or becomes infected. Like any injury where there is bleeding, you should clean the wound with soap and water and, using a gauze bandage, place firm pressure on the area until the bleeding stops. If the bleeding doesn’t stop, call the doctor.

Open sores sometimes form with hemangiomas and can get infected. Pigmented birthmarks rarely cause other problems, although moles should be checked throughout life for changes in size, color, or texture, which may be normal or could be a sign of skin cancer.

Pigmented birthmarks are usually left alone, with the exception of congenital moles and, occasionally, café-au-lait spots. Moles — particularly large or giant congenital nevi — sometimes are surgically removed, though larger ones may be more difficult to remove. Café-au-lait spots can be removed with lasers (highly concentrated light energy) but often return.

Vascular birthmarks, on the other hand, can be treated. The exception is macular stains, which usually fade away on their own; ones at the back of the neck may be more persistent but are not very noticeable.

Port-wine stains and certain hemangiomas can be disfiguring and embarrassing for children. Hemangiomas are usually left alone, as they typically shrink back into themselves by age 10. Larger or more serious hemangiomas often are treated with medication.

Lasers are the treatment of choice for port-wine stains. Most lighten after several treatments with a “pulsed-dye” laser, although some return and need re-treatment. Laser treatment is often started in infancy when the stain and the blood vessels are smaller. Marks on the head and neck react well to laser treatment. Special opaque makeup also can hide a port-wine stain.

It can be a shock at first to see a birthmark on your newborn. Nobody is perfect, yet many people have an image of a perfect baby in their heads. If the birthmark is clearly visible, people might ask questions or stare, which can feel rude. It helps to have a simple explanation ready to handle intrusions like this. Most people mean no harm, but it’s also OK to let them know if they’ve gone too far.

Even at a young age, kids watch how their parents respond to situations like this. This is where they learn how to cope with others’ reactions. Talking simply and openly about a birthmark with kids makes them more likely to accept one as just another part of themselves, like hair color. And practice simple answers they can use when asked about it: “It’s just a birthmark. I was born with it.” It’s also important emotionally for kids to be around supportive family and friends who treat them normally.

Note: All information is for educational purposes only. For specific medical advice, diagnoses, and treatment, consult your doctor.