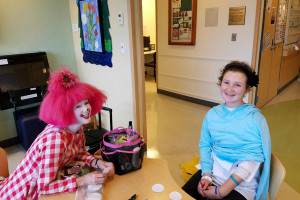 It sometimes seems like the biggest problems start with something small. In Morgan Platt’s case, it was an earache.

It was the last week of first grade in 2011, and Morgan went to bed with an earache. “I thought it was just that she was worn out,” says her mother, Kathy. “But when she woke up she was throwing up to the point of passing out. We called 911, and fortunately the medics that arrived recognized some of the other symptoms that she had and said it looked neurological. So they took her straight to Connecticut Children’s Medical Center.”

The doctors there did a CT Scan and an MRI, and neurosurgeon Paul Kanev, MD drove down from Massachusetts in the middle of the night to look at the results. He said that the problem was in Morgan’s left temporal lobe, the part of the brain responsible for speech and comprehension. He thought she probably had an astrocytoma, a relatively treatable tumor. “He said if that was the case, in in a month we wouldn’t know any of this happened,” Kathy says.

But when Dr. Kanev operated on Morgan, what he found was not astrocytoma at all; it was Grade 4 glioblastoma, the same form of cancer that struck senators John McCain and Ted Kennedy. As their circumstances demonstrated, the prognosis for adults diagnosed with Grade 4 glioblastoma is dire—survival is measured in months. But happily, children tend to fare a little better, particularly when the child has an indomitable spirit like Morgan’s.

Glioblastoma is thankfully rare: According to Morgan’s oncologist, Eileen Gillan, MD, Connecticut Children’s sees three or four children with glioblastoma every year. And it is very difficult to successfully treat. Morgan is one of the lucky ones. “Morgan is a heroine who has battled through a pair of surgeries, radiation and chemotherapies,” says Dr. Kanev. “She has remained a cherished and optimistic child, and her outcome is a celebration of the collaboration of each team member caring for her and the support of her wonderful family.”

Throughout her treatment, Morgan maintained an unfailingly positive attitude and shows a maturity that is startling for a 14-year-old.  She painted a ceiling tile in Connecticut Children’s with the message, “Stay Positive, Stay Strong,” And today she is participating in activities at the Shoppes at Farmington Valley to promote Pediatric Cancer Awareness Month.