When 26-year-old Jonathan Sales was diagnosed with cancer for the second time in his life, he and fiancée Alyssa Griffin, 27, had an emotional conversation. With all the uncertainty ahead, there was one thing they knew: They didn’t want to wait any longer to be married.

Jonathan, a seventh grade science teacher at Oakville’s Swift Middle School, and Alyssa, an IT specialist for nonprofit Save the Children, have been together seven years, and engaged since 2018. Their wedding had been set for May 2020. A big venue had been reserved, vendors lined up, and deposits made for a rehearsal dinner, hotel blocks and all the rest.

Eleven days later, surrounded by 75 loved ones and a coterie of devoted hospital staff, Jonathan and Alyssa said their vows at Connecticut Children’s. 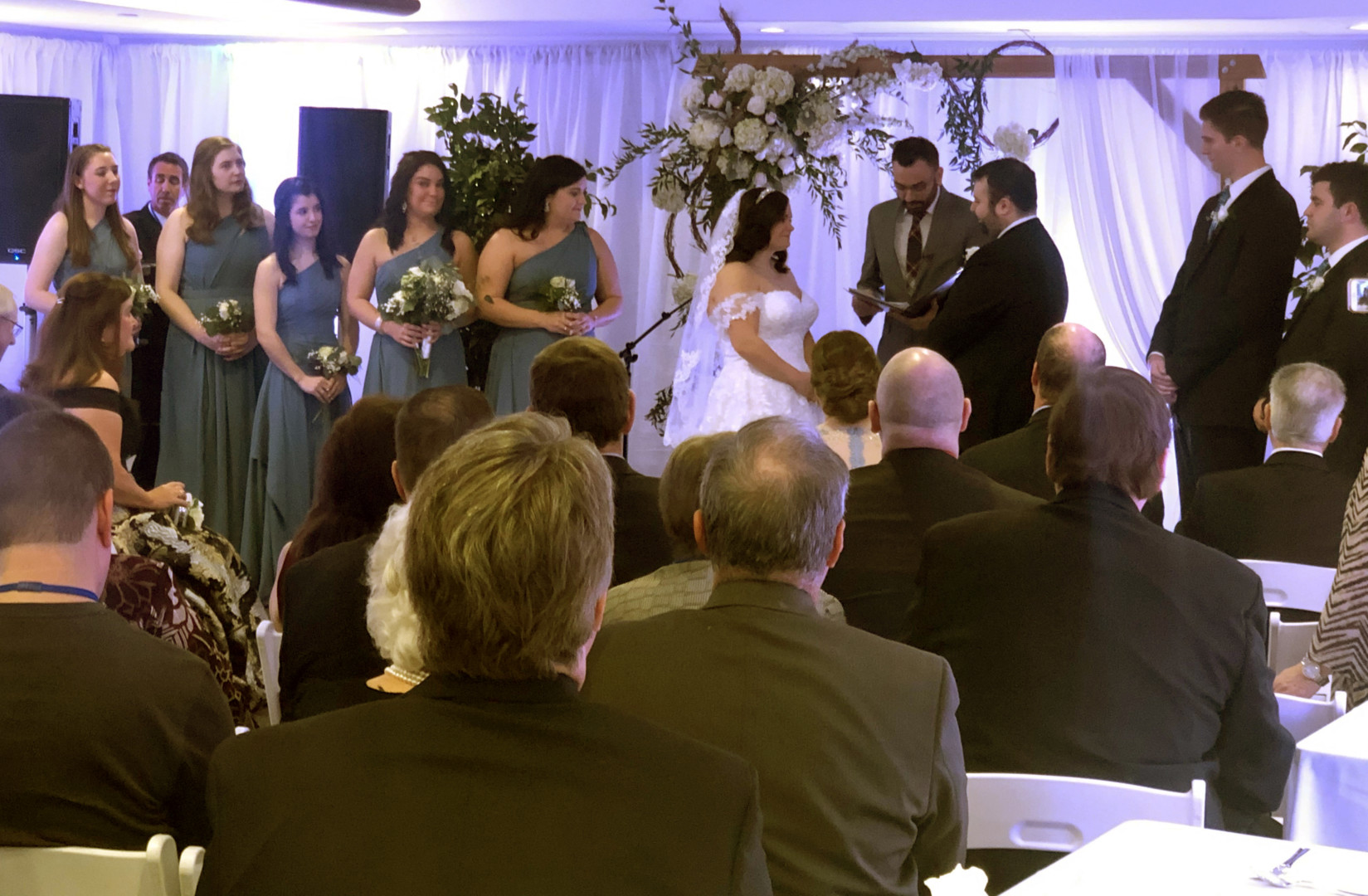 Jonathan has been part of the Connecticut Children’s family since the day, 13 years ago, when he was rushed into the Emergency Department with a white blood count of 480,000. He was greeted that day by oncologist Michael Isakoff, MD, and, at age 13, diagnosed with Chronic Myeloid Leukemia. His treatment included chemotherapy, a bone marrow transplant and radiation. He missed the rest of eighth grade, and half of ninth grade. His teachers tutored him at his home in the evenings so he could stay with his class; the experience inspired him to become a teacher too.

“Cancer shaped my life,” says Jonathan. “I had to grow up very fast.”

The treatment was successful, and Dr. Isakoff and Connecticut Children’s became a fixture in Jonathan’s life, checking in every few weeks, then months, then seasons as the years passed.

When he was 19, Jonathan met Alyssa at summer camp, where they were both working as counselors. She helped him tie water balloons. He backed her up when her campers misbehaved. They became friends. They had a calamitous first date, lost on a game trail on a hike gone wrong. They fell for each other. He drove two hours roundtrip every weekend from his college to hers. She finally won over his cat. They moved in together. He pushed her to follow her career dreams. She coaxed him into being more patient. They adopted two kittens.

Now, at age 26, Jonathan has been diagnosed with B-cell Acute Lymphoblastic Leukemia – a second primary cancer. He’s returned to Connecticut Children’s through the Adolescent and Young Adult Cancer Program to resume care under Dr. Isakoff, and support from social worker Mary Laliberte, who was by his side during his teenage battle with cancer. Immediately upon being diagnosed, he began a 28-day course in inpatient chemotherapy, throughout which he may not leave the hospital. After that he may be a candidate for a bone marrow transplant, or face another few years of chemotherapy. It will be a long haul until he’s healthy enough for the wedding he and Alyssa originally planned.

“I’m a practical person,” says Jonathan. “I started thinking about all parts of the disease. I’m here to get better. But I also know I’m sick and things could happen. I don’t want to wait to be married to Alyssa.” 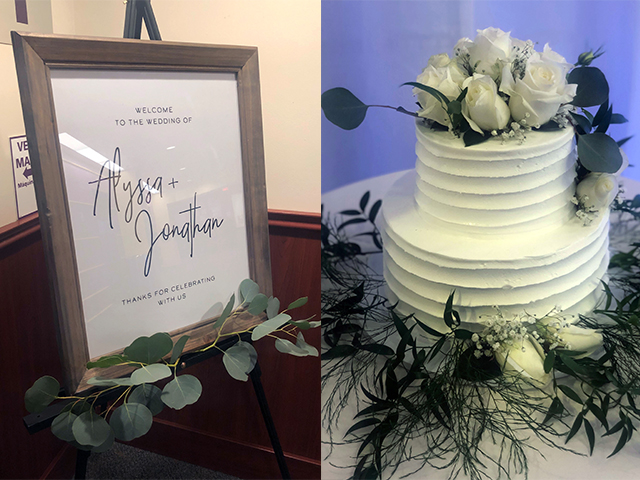 The couple was prepared to say their vows in a hospital hallway, attended by their parents and whatever staff members were on the floor. John Norko, a hematology oncology fellow and a justice of the peace, offered to officiate.

Then the rest of Connecticut Children’s got wind of their plan, and decided to give them a proper wedding. A meeting space was reserved. Departments were notified. The date was set for Nov. 30, 2019, the Saturday after Thanksgiving – just 11 days away. 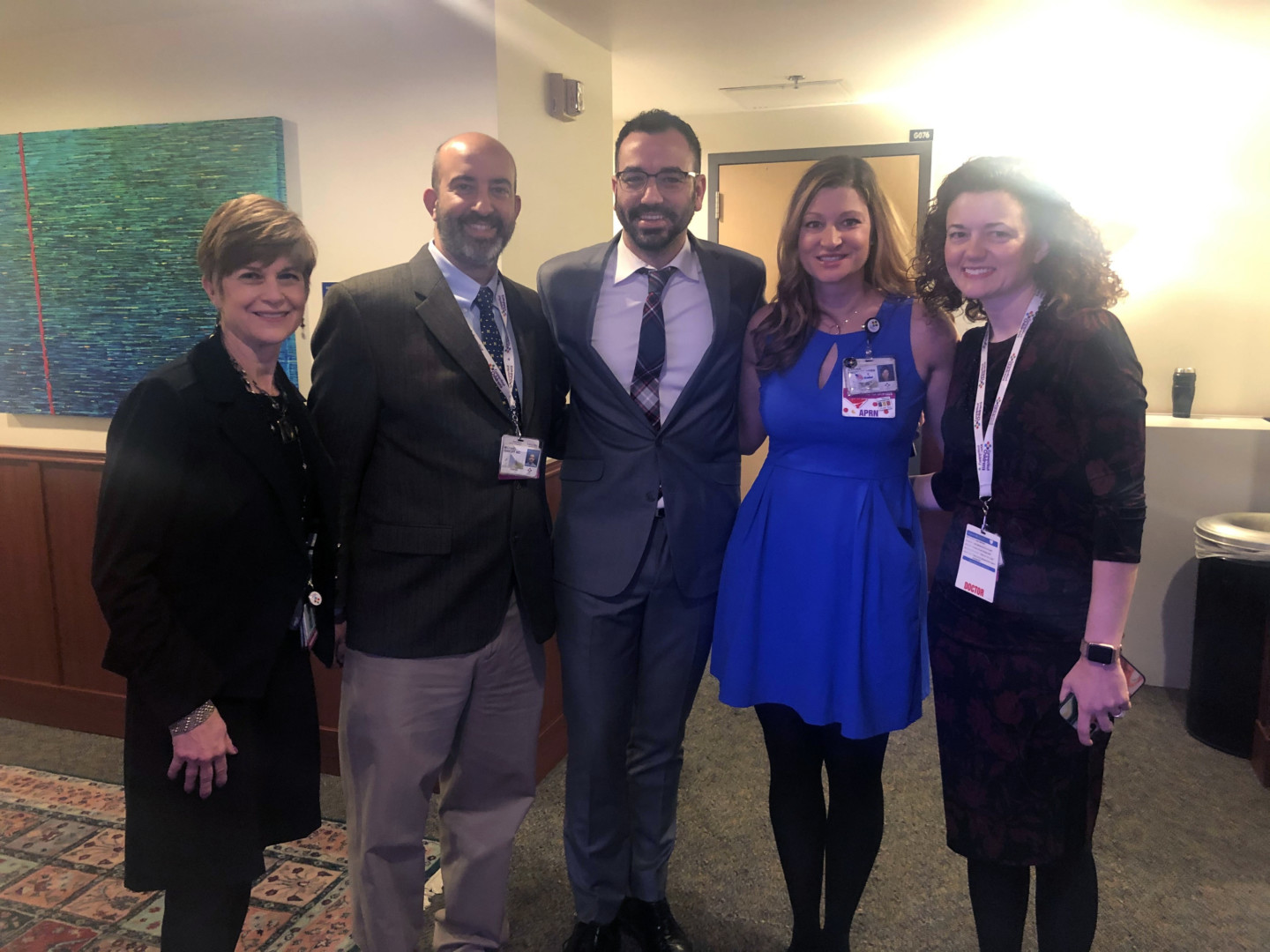 It’s rare, but not unheard of, for a wedding to come together in 11 days. It’s less common for that wedding to take place in a hospital. And it had never happened before at Connecticut Children’s.

With just a week and a half notice, the bridal party and 60-something guests cleared their calendars. Alyssa scheduled a last-minute dress fitting while darting between work, home and hospital – hauling around a backpack half her size stuffed with clean clothes, work laptop, and “Strong for Sales” bracelets for Jonathan’s students. In between Jonathan’s treatments, the couple talked through logistics and rush-ordered décor. Social worker Mary Laliberte stepped in as impromptu wedding planner, corralling everything from a cake to a photographer to the marriage license (no small feat, with Jonathan unable to leave the hospital). She had the eager help of the Connecticut Children’s team, from the facilities department to legal to security. “Nobody hesitates in this building,” Mary says. “Nobody says, ‘I don’t have time for this.’” The community rallied too: When a team member shared the couple’s search for a DJ on a local Facebook group, the response was overwhelming.

The morning of the wedding, the hospital’s conference rooms C and D were transformed into a ceremony and reception space. Alyssa carried white flowers down the aisle. Jonathan stood beaming at the end. In lieu of gifts, guests brought gift cards for gas and groceries for other families in the hospital, and signed up for Be the Match, a national registry for potential bone marrow donors. Dining services prepared chicken parmigiana, the meal the bride and groom shared on their very first date. For their first song as husband and wife, Jonathan and Alyssa danced to Ed Sheeran’s “Perfect Symphony.”

“The only really important piece”

A year and a half ago, on the March morning when Jonathan and Alyssa became engaged – out for her birthday breakfast, him too nervous to eat – Jonathan said, by way of proposal, “I don’t want to wait any longer.” They’d been together five years by then. They didn’t know what lay ahead, but they knew they wanted to face it together. They knew they wanted to be husband and wife when they did.

On the Saturday after Thanksgiving, the wait ended. Most of the details were not what they’d anticipated – the date, the venue, the vendors, the groom’s health. But all of the important pieces were there.

“To have this day come together is literally amazing: It’s amazing how kind everyone is; how hard everyone has worked; all the hospital has done for us,” says Alyssa.

“Anybody getting married gets lost sometimes as to the purpose of a wedding,” she adds. “You get stuck on, ‘What if the napkins don’t match?’, when the point of the day is to get married. The only really important piece is that when you walk down the aisle, the person you love is at the end.”